When it rains, it pours. This week's movies aren't bad in the conventional sense. No, each one has uniquely terrible qualities that all translate into different levels of badness. The Maze Runner, for example, is just plain stupid. A Walk Among the Tombstones is tired and misogynistic. This Is Where I Leave You actually isn't that bad; it's problems are more of the First World variety. And then there's Kevin Smith's Tusk. That one, well... We'll let that one explain itself.

EXPECTATIONS: During my extensive pre-movie drinking research, I came across two articles of note. The first was a Forbes Magazine article entitled "Does The Maze Runner Mark The Beginning of the End of the YA Movie Craze?" Now, I don't want to imply that Forbes Magazine might not be on the pulse of teen culture, and I certainly don't mean to say that such a respected and reputable publication would ever dream of making misleading and inaccurate article titles for clicks, but just the same, I'm gonna go out on a limb here and say the answer to that question is "No." As long as thirteen-year olds have disposable income and horrible taste, we will be treated to three or four of these a year. Considering there are five films this year dedicated to Marvel Comics characters, we can let the kids have this.

That said, the second article I read was the Wikipedia synopsis for this book, and besides being obviously written by a 15-year old who really needs to get out more, it contained some of the most frustratingly clichéd and contrived crap I've seen in a while. It's like someone trying to combine all of the elements that they think will make a perfectly marketable teen franchise, but instead of having access to focus groups like James Frey did, this is just one guy in his attic furiously highlighting library copies of The Hunger Games, and somehow this resulted in a book deal because that's the world we live in today. 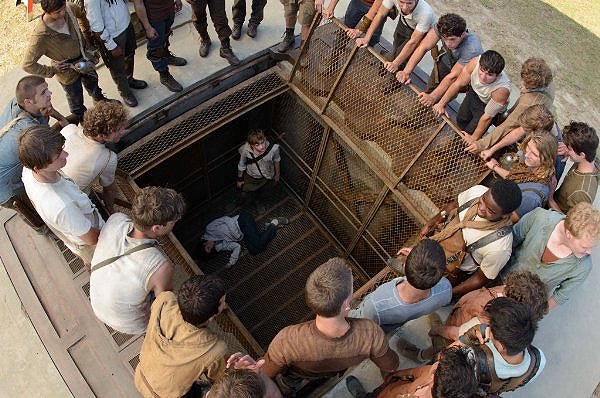 Crap, here comes another one.

REALITY: This movie is dumb and bad.

I know that I am a film critic and as such I am supposed to elaborate on thoughts like this, so here you go: This movie is very dumb and really bad. It is so dumb and so bad that I am actually doubting my abilities as a writer and a critic and am unsure whether or not any of the words which follow will convey accurately how dumb and bad it is. So if you wanted to just click the "Next" button now and move onto the next review, I wouldn't blame you because I have gotten the point across that I needed.

The Maze Runner opens with teen boy Thomas (Dylan O'Brian) being dropped into a hunky teen-boy wilderness preserve with a group of amnesia-suffering teens who live together within the confines of some massive walls. Every day, doors open and the boys are granted access to a labyrinth, and they send two or three of their fastest members out to run through the maze and map it, but they must be back by sundown so they aren't locked in the maze overnight, sure to be killed by mechanical nightmares called Grievers. Thomas meets his one-note compatriots, including the de facto leader (Aml Ameen), the lieutenant (Thomas Brodie-Sangster), the audiences' puppy (Blake Cooper), and Draco Malfoy (Will Poulter, last seen wearing prosthetic genitals in We're The Millers). Of course Thomas is The Special One For Whom Everything Is Different, or TSOFWEID, and he manages to live a night in the maze, kill a Griever, get a girl sent to camp, and lead an uprising against what is essentially a Lord of the Flies-esque dictatorship all within about three days. 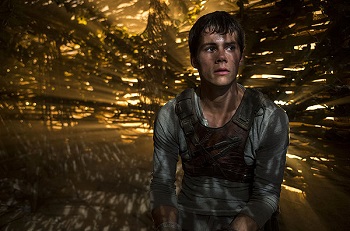 Only The Special One gets a night light.

I know I missed out on a lot of plot points in that description and that someone who has read the books is getting ready to e-mail me all of their corrections (do not do this), but that was already a very long paragraph and I didn't mention half of the convolutions this movie keeps inserting in order to keep adding rules to its 100-minute runtime. I didn't even get to mention that there is an evil organization in this movie literally named WICKED.

Thomas is such a nothing protagonist and O'Brian is so poor at expressing any emotion or reaction other than "slight concern" that the movie has to actually create handicaps in order to establish him as our TSOFWEID. This means that everyone in this film suffers from Selective Stupidity, wherein each character makes excuses for the fact that they never came up with any of Thomas' ideas before. Despite having no memory of anything beyond waking up in the camp, these kids sure do remember how to build a society and a system of government. Even though they have pulleys and steps and have built essentially a medieval village with their bare hands, they seem to be incapable of making a really tall ladder or staircase up the walls.

Most importantly, Thomas' big special idea for getting through the maze is "go in together" and "bring some weapons this time", meaning that at no point in the three years that these kids were in this camp did any of them come up with those strokes of brilliance on their own. We're told that only the fastest and strongest are equipped to run through the maze, but when they finally do it, even the fat kid manages to get through just fine. The best part is that we can't even say that these kids are just idiots, because the movie goes out of its way to tell us they are geniuses with special brains. 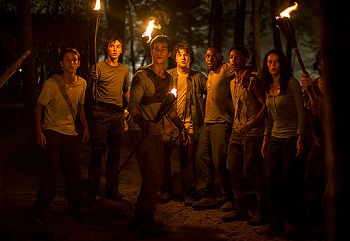 Okay, fine. Everyone gets a night light.But these aren't the only rules the film is content with ignoring, there's also basic filmmaking and cinematography methodology which gets tossed aside. Almost all of the fight scenes against the Grievers are set at night, with the camera jumping so rampantly and the lighting so poor that the viewer has no way of telling where anything is. (Which is a pretty big deal when most of your movie is set in a maze.) We the audience just have to kind of guess what is happening here because the movie sure as hell won't show us. This may actually be for the best because the Grievers have some of the worst character designs in history. Imagine the robot spider from Wild Wild West, but instead of a spider body, someone inserted a colostomy bag.

However, the film's biggest failure is that it's all leading up to nothing. We close with absolutely no resolution, and zero answers to all the questions which no one cared about to begin with. Why does being stung by a Griever and then recovering bring back your memories? Who is the evil Patricia Clarkson woman? What actually is the plot here, and what was the point of any of this? "Fuck you, go watch the next movie," is The Maze Runner's reply. The film is so committed to pushing a franchise and keeping you in the dark about the supposed underlying mythos of the series that it fails to give you enough information to make this film interesting. This movie exists only to get you to buy a ticket to another movie, and the worst part about that is that it will probably work.

MINORITY REPORTS: I haven't seen this movie, but I already know I hate it. "TSOFWEID" rhymes with "Joss Whed", and that's all the reason I need. - Joseph "Jay Dub" Wade

Someday, I'll write a dystopian YA novel about teenage vampires who are competing for the last of the world's blood supply. Oh yeah, and the female protag a) is dying of fang cancer and b) begins a masochistic relationship with the young, charismatic leader of the tribe. - Sean "Keanu Grieves" Hanson