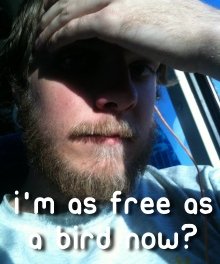 The man your wife had an affair with is riding the bus. The passenger behind him is finger-drumming on the back of his seat, his ponytail swaying as he taps. His drumming is really bad, without any fills or breakbeats. He wants to tell the ponytail man this, but he isn't 100% sure what a breakbeat is, and he doesn't want to get schooled. Maybe ponytail man is an aspiring drummer who knows all the technical terms but just sucks at rhythm.

He remembers how he once wanted to be a musician, a bass guitarist, and he was for a while, but eventually quit because there wasn't much money in it. He thinks of introducing himself to the ponytail man and telling him about his exploits as a bassist, like the time his band got asked to do an encore of "Freebird" twice. But he decides it would probably just make him sound old: No one listens to Skynyrd anymore; it's Nickelback or 303 or some shit. Finally his stop comes. He gets off the bus, feeling dejected and wondering when he lost touch with the spirit of rock 'n' roll. 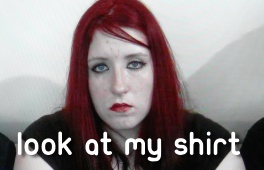 The girl who rejected your invitation to the senior prom is sitting in the break room at Walden Books drinking a coffee. She's wearing a T-shirt she got at Hot Topic that has a clever sexual innuendo on it. Normally the shirt makes her feel attractive, but tonight it just seems kind of silly in the context of her job, which is to stock books and help confused old people find books. Also, the only other guy in the break room is Randall, who she's pretty sure isn't into women. Or men. She's pretty sure he's a eunuch, and respects his choice because it's a considerable life decision.

She wonders if she can maybe work this into the narrative essay she has to write for community college. Getting an English degree would be a lot easier if they just let you write fantasy, because she's got several hundred pages of that she writes in her free time and reads to her cats. She has this great idea for a Tolkienesque fantasy universe but needs to coin about 500 more words for the monster and spell names and who has that kind of time these days? She tries to remember the last time anyone noticed her shirt and what their faces looked like, but all she can think about now is Tolkien and how he's got a fucking padlock on Hobbits just because he single-handedly invented and popularized them.

She sees Randall glance at her shirt and smiles, but he just stares blankly. He says there's lint on her shirt, and a coffee stain. She pretends to laugh and sips her coffee, spilling more on her shirt in the process. 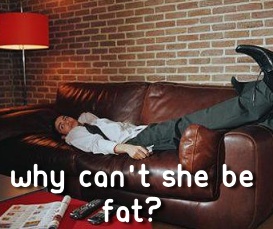 The guy who cut you off on the freeway this morning is lying on his couch watching a football game. His dog is barking out the window at some kids on the street. He yells at the dog to stop barking. His wife in the other room yells at him to stop yelling because she's trying to read.

He groans and turns up the volume and tries to focus on the game. He wishes his wife watched football; that would at least be something they could do together, besides arguing over bills and occasionally having sex, which is still pretty good although sometimes he fantasizes about fatter women because that's sort of a fetish he has and he's not really sure how to tell her about it. He wonders if the book she's reading is about cakes, because that would dovetail with his fat fetish. He wants to ask her, but feels guilty about his desire, it being a combination of gluttony and lust. The dog is still barking, making it impossible to hear the game, so he turns off the TV and goes to bed, hoping he'll dream about fat chicks. 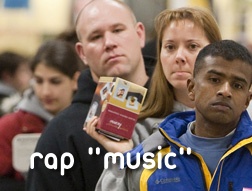 The boss who turned you down for a promotion is standing in line at Old Navy. There's an R. Kelly song playing on the store PA that he really hates. He wonders why kids these days listen to so much hip-hop. Not that he hates hip-hop or anything; he just hates all the bad hip-hop that radio stations play just to cash in on this hip-hop fad, which will probably go away in a few months anyway.

The cashier, an attractive girl in her early 20s, turns toward him and says "Hey, what's up?" He starts to speak, but then realizes she's talking to the girl in line behind him who she must know from college or something. His face flushes, partly because of the misunderstanding, but mostly because what he was going to say was even more embarrassing. (Buying a sweater for the wife, indeed. What were you thinking?)

The cashier manufactures a smile and rings up his purchase. "Did you find everything okay?" she says coolly. He nods. He was planning on suggesting to her that the store should play less hip-hop, but now he's lost the nerve. Plus he realizes this R. Kelly song isn't that terrible: it's probably something he would dance to if he was drunk at a party. That is, if he went to parties anymore. Nowadays it's just overtime at the office and watching reruns of Gilmore Girls with the wife. He tries to recall the times before he automatically added 'the' in front of 'wife', but like the parties he may or may not have gone to (he's not even sure anymore), it's a blank folder in his memory.

He takes the sweater and shuffles out the door. On the way out, he hears a sliver of the cashier's conversation with her friend - another girl in her early 20s who's wearing a Walden Books nametag and a shirt with a lewd slogan on it. Her friend says something about "hobbits" which must be some hip-hop slang for smoking dope or getting hassled by the man. He sighs and wonders if it's too late to quit the law firm and buy a Ford Mustang and get a job at a record store. He realizes it is.