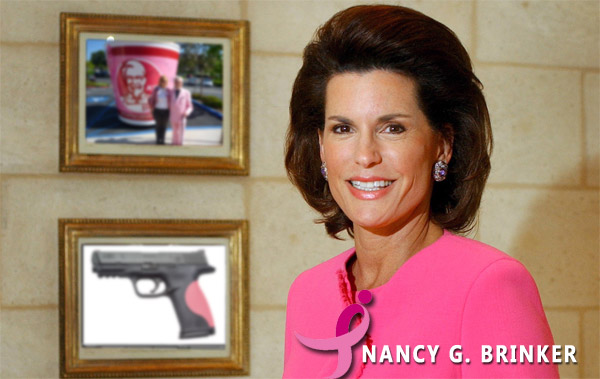 You've probably heard by now that the Susan G. Komen Foundation, the country's biggest breast cancer charity, has pulled its grant funding from Planned Parenthood. Doing bad while claiming to do good is nothing new for the charity. 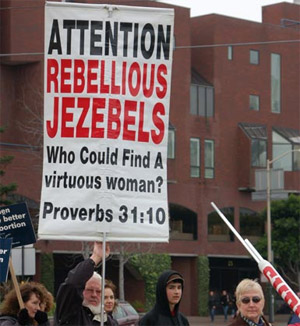 Lots of people are understandably upset about the recent turn of events, wondering why cancer prevention needed to be turned into a political hot potato over abortion. We get it, right wing people, you don't like Planned Parenthood because they don't believe in the same things as you.

You know who does like Planned Parenthood? Young women who can't afford health screening, checkups, birth control, or don't have any source of medical information about their bodies because they live in a parochial wasteland that teaches insane bullshit like abstinence sex education to pregnant teenagers. Let me know when Baptists are teaching breast self-exams.

Komen's money was not huge, but it's just another successful attempt to apply pressure and strip resources from the only sexual health organization doing widespread good. Every penny taken away from Planned Parenthood will lead to more unwanted pregnancies, more missed diseases and, ironically, more abortions. No surprise, results aren't what matters in targeting Planned Parenthood; it's all about punishing women for being sexually active.

Komen spokespeople disagreed that this incident was about politics: 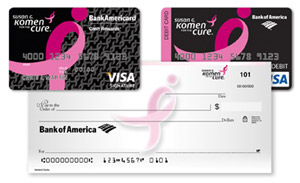 "We are dismayed and extremely disappointed that actions we have taken to strengthen our granting process have been widely mischaracterized," some liar actually wrote in a press release. The supposed reason Komen is pulling the funding is a fictional clause that triggers when an organization is the subject of a congressional investigation. A fictional investigation.

Planned Parenthood is currently being investigated by Rep. Cliff Stearns (R-FL), who is an avowed pro-life congressman with no actual evidence of wrongdoing on the part of Planned Parenthood.

Since Komen is cutting ties to any organization "currently under a local, state or federal formal investigation for financial or administrative impropriety or fraud" they might want to have a look at Bank of America, which has contributed millions of dollars to Komen in exchange for letting them stick their pink ribbon bullshit on credit cards. Bank of America is currently under investigation in New York, Arizona, California and Nevada for foreclosure and mortgage fraud. 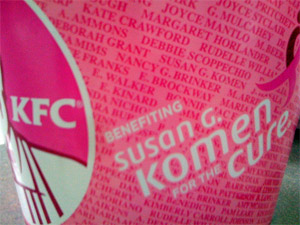 Don't expect Komen to act quickly to sever ties with anybody else. They generate a huge portion of their revenue every year from corporate partnerships. The process is commonly called "pinkwashing" and refers to companies donating a tiny percentage of profits and in exchange slapping the Komen pink ribbon on their products and receiving positive publicity. Komen has basically no dumpster they won't dive into on this front.

Probably the most infamous of these was the 2010 "Buckets for the Cure" program Komen launched in partnership with KFC. Pink buckets full of chicken (including breasts, get it?!) were sold with the feel good ribbon slapped on the top. All KFC had to do was fork over eight million dollars. From a health standpoint this would be like the American Heart Association putting some egregiously over-used symbol (they don't have one) all over a product that caused cancer.

Examples of pinkwashing can be found all over, like on packages of mushrooms at the grocery store, on horrible perfumes, or even on a branded firearm being sold by Smith & Wesson. Hell, why not put the pink ribbon on shotgun shells? Oh, wait. It is.

If pinkwashing weren't bad enough, there are the bullying tactics Komen uses to muscle out other cancer charities and protect its lucrative brand.

Last year, Ms. Tighe's Uniting Against Lung Cancer got a letter from Komen requesting it change the name of the charity's "Kites for a Cure" fund-raiser, a beach event featuring hand-decorated kites, to "Kites for a Cause," or another name. Komen later warned her against any use of pink in conjunction with "cure."

"We're Susan fucking G. Komen and we own the cure. What is this, trucker hats? A walk-a-thon? Fuck you! If we see you trying to raise a dime for breast cancer talking about 'the cure' we are going to be back to break your windows. You cure cancer our way or not at all." 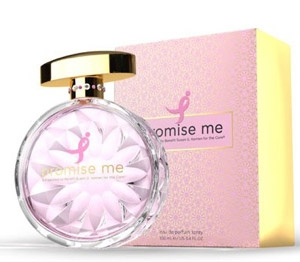 Turns out "not at all" is also one of the chief beneficiaries of the money Susan G. Komen raises. The percentage of revenue Komen sinks into cancer research - remember this is by design "For the Cure" - has declined for the past decade, from 26% annually to 19%. Breast cancer mortality has not declined in decades. Administrative expenses are on the rise and remain murky at Komen. The charity receives top ratings from accountability organizations, but its financials are hardly transparent, with its overhead falling into broad categories.

We need to get to the bottom of this. Might I suggest a congressional investigation of Susan G. Komen? Under those circumstances the organization will have no choice but to sever ties with itself.

All of this plops squarely in the lap of the Brinkers, a right wing political and business family responsible for the organization and responsible for hiring people like Karen Handel as the VP at Komen. Handel is the former Georgia Secretary of State, a tea party conservative and an outspoken anti-abortion politician. She was appointed in April.

Conservative politicos in the administration of Komen would be completely fine if the charity were apolitical, as you would expect of any charity dealing with a disease like cancer, but as was demonstrated this week, Komen is now fully engaged in politicking. If giving money to an organization that is trying to win political points even at the expense of women's health makes you feel dirty, then I suggest you donate to an organization that puts women's health first.

Find out more about the upcoming novel from Zack Parsons