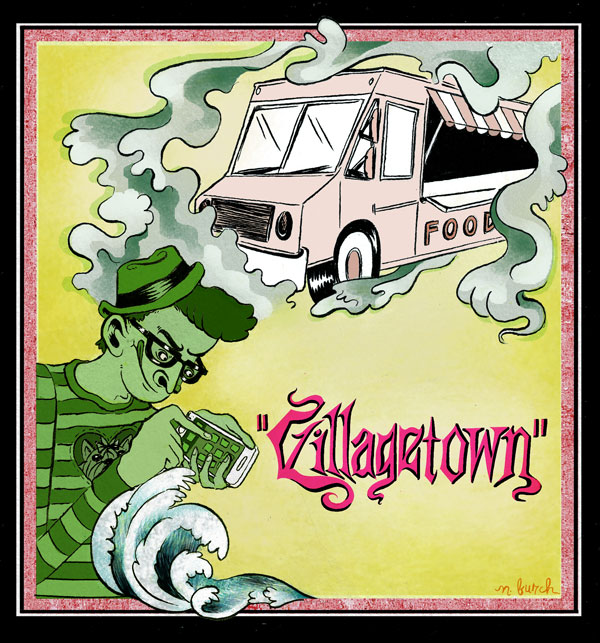 Evelyn Mulwray poured herself into my office looking like between-babies Tina Fey overspent at a Goodwill. She was self-consciously pulling at the bottom of her shirt, trying to hide an inch or two of extra waist. I pegged her as the sort of girl you might Skype home to the parents while you're sharing a half-and-half Golden Grahams/Cap'n Crunch with her at Fortunate Charms, the cereal restaurant next door to Sensual Kiln, the reverse nude sculpture spa.

In other words, Evelyn Mulwray was just my type.

I was setting up my BidBear app on my white iPhone G4 to bid snipe an Alamo Drafthouse Mondotees poster of The Darjeeling Limited. The most underrated of Wes Anderson's films. Steve Jobs was dead and the boys in blue had already clapped bracelets on the Big C, so I figured the least I could do was use what he blessed this world with to buy more stuff for my office.

I was so distracted by Mrs. Mulwray's entrance I configured something incorrectly in the BidBear. I ended up bidding almost 600 dollars for the Latvian poster of Fletch Lives. The one with the screaming skull. I had a feeling my poster shopping wouldn't be the last thing Mrs. Mulwray screwed up.

She said her husband, Hollis Mulwray, was having an affair. Who is Hollis Mulwray? Good question, I thought as I asked her that question. She said he was the chief engineer of Greenwich Village Department of Dog Paths. The big dog, so to speak. I remembered him from a Village Voice article about competing interests on the riverfront. When it came to dog paths in the Village there was nobody bigger than Hollis Mulwray.

Hollis liked dogs and Mrs. Mulwray wanted proof that he was up to no good with the wrong sort of bitch. Her word, not mine. I don't condone hate speech.

I also don't handle dog detective work, so I asked her if she was sure she didn't want Dog the Bounty Hunter. She said she didn't get the reference because she didn't own a TV. Her story checked out. I crumpled up my sheet of Top Chef and Project Runway references and took the case.

I figured work would be a good place to start. The Greenwich Department of Dog Paths' website listed a council meeting as the next public event. The inclusive Greenwich Village council met on the second floor of a vegan co-op near the NYU campus. I would need to blend in with the crowd.

I combed my hair into an androgynous pompadour and dressed in an ironic Yorky sweater, a pair of lavender True Religions with the label defaced and the waist so tight they notched my hip bones (Yogi Kevynn always said I had a remarkably flat pelvic region) and a slip-on pair of laceless gray Beeko Boys with Native American embroidery done by reservation Indians up-state. Johnny Sews-for-Jews.

The Ricky Martin lookalike at the door of Seitanic Victuals was wearing a leather wrist strap like she meant it. She checked me out, but her gimlet eye never overflowed and her emergency whistle never emerged from the pocket of her cargo Capris. I was in.

Hollis Mulwray was there, buried in corduroy and manila folders. In fact, he seemed to be the center of attention. A crowd like the one I saw when Zabars was out of knish was hurling insults about dogs. Some sort of creature was holding forth at Hollis over his refusal to grant the village permission to widen the dog path.

"Some of us have more than one dog. And the bicycles use the dog path too."

"Yeah," agreed another mound of gender grudges and unlaundered wool. "I might get raped."

The trigger-word sent a gasp through the night-take-backers and scissoring sisters and the human hillock with a brace of Rottweilers smiled in victory. Mulwray wasn't budging. He wasn't going to widen that dog path. I didn't have a dog and the whole thing bored me, so I played some kakuro on my phone and waited for Mulwray to clear out.