This article was originally going to detail my first impressions of Anarchy Online along with a brief review of this massively multiplayerly onlinely game, but I seemed to experience slight technical difficulties while logging in to the game so I could write my review. One of the default options of the game seemed to be "Emulate Desktop Mode," as the title continuously crashed to my desktop every few minutes, spitting out various exotic server errors and messages which probably shouldn't have been spit out. I dug thoroughly through the instruction booklet and the online FAQ but I simply could not find a way to disable "Emulate Desktop Mode" and was forced to stare upon my wonderful Windows default background after every two minutes past logging into the game. While I have no problem with my desktop and the colorful "Garfield" and "Beetle Bailey" icons that adorn it, I was confused as to how FunCom expected to collect monthly fees for a product which does nothing but show users their recycling bin graphic. Since I had absolutely NO chance of logging in and attempting to review the game before experiencing FunCom's self-imposed "two minute crash limit," I decided to make the most of my two-minute playing time intervals in AnarchyVille. The following is a summary of those events. Nothing has been fabricated, made up, or exaggerated, unlike the rest of this site which is a tightly-woven ball of outright lies and half-truths.

1:02am -Zoned into the "Omni-1" district, which is also known as the "Omni-1 Frame Per Second" district. This area will lag and slow down your computer so badly that it may actually begin traveling backwards through time, all the way back to the 1970's. Once you zone in, your CPU begins rendering three polygons per minute, even less if you don't have the recommended 15 gigs of RAM installed on your computer. And I'm not talking about that crappy SDRAM either, I'm talking about that new RAM that uses lasers and atomic energy to shoot data all over the place like a drunken cowboy on metamphetamines who's shooting data all over the place. I ran up to an insurance station, saved my game, and began looking for somebody to join my group, which currently consisted of just myself and an imaginary ghost mummy. I did not even have a chance to /shout, as the game decided to crash to my desktop with some goofy server message.

1:08am - I arrived back in the game. Before continuing, let me explain my character, Latrineia, to you. I picked the most worthless profession I could find, the Bureaucrat class, and then created the most disgustingly appalling character I could come up with. Latrineia is a fat midget secretary with numerous facial scars and pock marks across her face, showing off her not-so-hidden talent of "being ugly." Her backstory is that she participated in the Great Techno ePaperclip War of 2834726 AD, causing her face to become horribly disfigured from crossfire during the Battle of Water Cooler Ridge. She has also had ass implants to make her "sitting and recording dictation for a fat white old guy" skill much better. It's paid off so far, although she hasn't had a chance to do any actual secretarial work. I, however, got to look at my desktop's Microsoft Word icon every four minutes after logging into Anarchy Online, so I suppose I'm actually getting better at being a Bureaucrat.

I decided that I wanted to group with some players so I could begin typing memos to the rest of the party and trying to tax them into submission. However, I immediately realized that they were probably crashing to their collective desktops as well, so I decided not to risk grouping with their unpredictable asses. Instead I tried to recruit the automated cleaning robot to my team of hardcore secretaries (me). Cleaning robots are reliable! Cleaning robots are predictable! Cleaning robots clean crap up, and Bureaucrats like myself really appreciate a tidy office, so I began asking the cleaning robot if he'd be interested in joining my party of hearty adventuring desk clerks. The robot, however, was playing hardball and decided to give me the cold shoulder by refusing to respond. 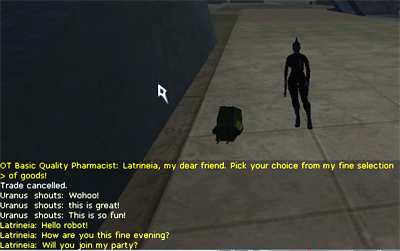 After trying to woo him with my good charm and above-average table manners, I decided to pull out the "big guns": I offered him an excellent dental plan and reimbursement for any group-related credit card bills that he may incur during our adventuring. No deal. Some goofy looking guy approached me at that point, asking what direction the sewers were. I responded by asking him if he thought I had accidentally offended the robot, and if not, why the cleaning robot wasn't talking to me. The guy ran away. I began shouting, demanding he come back at once and give a stern lecture to the cleaning robot, but he wasn't interested in responding. I kept referring to him as "Jacob Parliwacker," although that wasn't his name. At this point the game crashed.