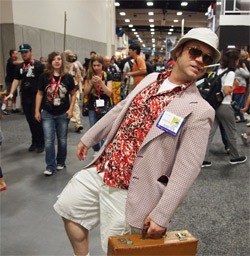 Famed gonzo gaming journalist Hunter S. Thompson was writing for Kotaku when he saw the end of gaming culture in 2014. From the 2007 Spike TV Video Game Awards to years of covering Japan and gamer culture, he was there when the sex lady scandal broke. He was working the Japan beat when a bunch of good, regular gamer guys decided they had to destroy the sex lady. He was in the offices when Kotaku's Stephen Totilo decided that because of issues raised by the sex lady fracas, Kotaku journalists should no longer crowd fund Marxist Metroidvania games and 8-bit roguelikes where you play a baby learning about danger. Thompson saw the very concept of gaming journalism thrown into the Gutter(TM) brought to you by Mountain Dew and the Xbox One, and he wrote about it in his book, Fear and Loathing at Kotaku.

"He who makes a beast of himself will be banned from the Escapist forums and I hope they also lose their Steam Score. Seriously. Enough of this, guys." 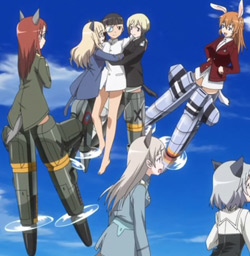 We were somewhere around Roppongi, on the edge of Tokyo, when the caffeine chewing gum began to take hold. I remember saying something like "This train is uncomfortably crowded; maybe we should get off...." And suddenly there was a terrible woosh all around us and the sky was full of Strike Witches, which are teenage girls, named after real ace pilots, who turn into airplanes and fight aliens. It sounds silly, but it has a surprising amount of pathos. A voice was screaming: "Is that Erica Hartmann? I want to get a picture with her."

Then it was quiet again and everyone was looking at me on the train. I knew I shouldn't have gotten on the train. I don't do well in crowds or enclosed spaces. My attorney had taken his Lenny Face hachimaki off when we boarded the train and he was playing his favorite Nintendo portable. "What the hell are you yelling about, dude?" he muttered.

No point mentioning the Strike Witches. The poor bastard will be glad they're here when the Neuroi attack soon enough.

My editor Stephen Totilo had given me 1.754 bitcoins, most of which was already spent on extremely ecchi cast off figurines, region free Vita games and crazy candy. My tote looked like the inside of an evidence bag at the suicide of a manga artist. I was just playing with my Guardians of the Galaxy BishMjo Gamora's breasts and thinking about how it's unfair there aren't more women in gaming when the text came through from Totilo: no more crowd funding. This was about that sex thing.

Needless to say, I turned off notifications. It would be a miracle if we got to a maid cafe before the fear took hold.

Never mind. Let's get right to the heart of this thing. You see, about twenty-four hours ago we were sitting on the Polo Bed at the Beverly Hills USA Okay Fantasy Love Hotel - looking for funny game shows on the TV, of course - and we were just sitting there definitely not having sex ever with an indie game dev when this uniformed kogal came up to me with a pink telephone and said something that I could not understand and seemed to get angry when I gave her a tip.

"I want you to understand that this man on the bed here is my attorney," I told her. "We respect you and are glad you are not a game developer, although not because you are a woman, but because we are about to have sex with you. Now, do we take off our clothes or what? Do you mind if I record an unboxing video?" 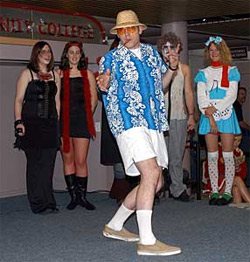 Strange memories on this nervous night at Kotaku. It seems like a lifetime, or at least as long as it took to get a 100% complete n Disgaea 2: Cursed Memories - the kind of peak that never comes again.

Gaming culture in the middle of the twenty-teens was a very special time and place to be a part of. All those survival games for PC where you spend an hour chopping wood and then die of thirst. Mountain Dew sponsoring everything. People who literally want to kill a Youtube woman. Maybe it meant something. Maybe not, in the long run, but no explanation, no mix of blog posts or chiptunes or let's play videos can touch that sense of knowing that you were there and alive in that corner of time and the world. Whatever it meant.

So now, less than five guys later, you can go to Otakon and look West, and with the right kind of eyes you can almost see the high-water mark-that place where the gamer culture finally broke and rolled back.