Fundraiser Update and Packing is Fun!

The SAPI Plates Must Flow! 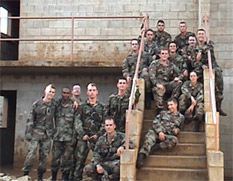 GreenMeat and most of his platoon pose for the camera at a MOUT course.Right around Christmas we held a fundraiser here at Something Awful to help out a goon and Staff Sergeant with the 25th Infantry Division by the name of GreenMeat (Scott Howie) who was being shipped out to Iraq. The problem arose when he was told that there was only a possibility of receiving crucial small arms protective inserts for their body armor. This armor was in short supply and GreenMeat did not want to place total faith in the supply chain when his life and the life of everyone in his platoon would be on the line. Our goal was to raise 20,000 dollars to purchase small arms protective inserts for GreenMeat and twenty other members of his platoon. So we turned to our forum members first and then to our readers here on the front page. FARK joined in and their readers also contributed a healthy amount to the donations that flowed in at an incredible pace.

In scarcely a week we had exceeded our goal and raised almost 21,000 dollars. The problem then became finding a place to spend the money on what we needed. I had been looking for a dealer who could supply us with the plates and was beginning to lose hope. Two deals fell through because they would take too long, another deal was just way too expensive and delivery still could not be guaranteed. Then a reader of our site who happened to work for Reliance Armor Systems contacted me about working something out. Already burned by false promises from others I was cautious about entering into an agreement with them, but they offered a good deal and Jeff assured me repeatedly that they could meet my deadline.

The deal did not go off without a hitch. At the last minute a Human Intelligence (HUMINT) unit was added to GreenMeat's platoon that consisted of 11 people. Because we still had plenty of money left over thanks to the price given to us I agreed to attempt to tack them on to our order with Reliance. Jeff from Reliance assured me that it could be taken care of and we reached a new agreement. Literally the day after Christmas at 9:30 AM I was at the post office, slightly nervous and holding a cashier's check for 14,000 dollars in my hand. I had never in my life dealt with such a large transaction at once, and I was scared to death of it all being a scam, despite all the fact-checking I did on Reliance. I overnighted it and then began the hellish torment of Jeff from Reliance as I repeatedly harassed him about sending the armor out.

62 SAPI plates arrived with the troops in Hawaii with less than a week to spare, but the hard work was not over for Jeff or Reliance. Six people in GreenMeat's platoon were of the small persuasion and the 10x12 inch armor plates would not fit in their MOLLE carriers. That meant with only days to spare I had to track down a supplier who could guarantee me shipment of six tactical vests to Hawaii before GreenMeat and his unit left for the Middle East. After a brief scramble (and a loss of about 24 hours), Jeff and Reliance once again stepped in to fill the void. Agreeing to forego their "pay in advance" policy, Reliance went the distance and contacted a third supplier to rush ship the carriers to Hawaii. They arrived the day before GreenMeat and his platoon were due to deploy, and everyone breathed a sigh of relief.

In advance of the MOLLE carrier's arrival I purchased two digital cameras for GreenMeat to record the mass of armor and hopefully his journey in the Middle East. Weighing in at over a quarter of a ton, the stacks of armor plates in GreenMeat's house were quite a sight to behold, and I look forward down the road to seeing pictures of them being worn by his unit in Iraq. Since arriving for last-minute pre-deployment training in Kuwait, GreenMeat has only had one opportunity to contact me.

sorry I haven't been in touch. I don't really have access to anything other than snailmail where i am right now, but once we get to Kirkuk things'll be different.

things here are rather sobering. we've been uparmoring our vehicles (I'll send pix ASAP) and doing a buttload of training to get ready to run the gauntlet through Iraq. Things've been hot along our route of march; hopefully we'll pull through okay and get to where we can do our jobs.

We still haven't been issued any body armor SAPI plates; knowing what we know now, we're more grateful than ever.

more to follow, god willing and the crick don't rise.

take care of yourself! -scott, and "the goon platoon"

The remaining funds donated in the fundraiser are being spent, as promised, on care package items for GreenMeat and his platoon. Based on suggestions from current members of the US Armed Forces and veterans of Afghanistan and the first Desert Storm we have already purchased a huge stack of books, a portable DVD player, DVDs, and a couple board games for the platoon to stave off boredom with. This stack of entertainment will be divided up into three shipments to go out one per month for the next three months. In addition to this we will be purchasing approximately 700 dollars (more or less depending on costs of shipping) worth of food, hygiene items, and other consumables once per month to be included in separate packages with each shipment. Also included in these shipments will be a package intended for Iraqi children and families to be dispensed by the soldiers if they so choose.

I know I promised an address for GreenMeat to send care packages to, but I want to make every attempt at verifying the APO he gave me pre-deployment before encouraging people to send out masses of letters and care packages.

Before I wrap this up I owe every single person who donated money to this fundraiser a huge debt of thanks. I am certain GreenMeat and his unit would thank you all individually if they had the opportunity, and he repeatedly told me that members of his unit were in tears over the outpouring of support. Almost everything about the war in Iraq is politically charged these days, but I'm proud that a community of seemingly heartless and sarcastic bastards like the one that surrounds Something Awful could come together for a good cause. Personally this has been one of the most fulfilling things I have ever done in my life, and I just hope that all of the donations and the time I spent organizing were wasted on something that these guys never need to save their lives.

The Pornography Must Not Flow! 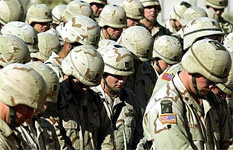 US soldiers hang their heads sadly because they didn't have lifesaving armor purchased by amazing and kind individuals like you.The process of preparing care packages for soldiers stationed abroad, in areas where the Army Postal Service is really the only mail available, and things might also be exploding is not an easy task. When packing the items you have to take into consideration wild fluctuations in temperature of the package, extreme environmental conditions like possible dust storms, and the unexpected like a bunch of Fedayeen shooting machineguns at packages rolling along a conveyor belt. But before you put the first item into a box and wrap it in ten thousand sheets of newspaper, you have to consult the prohibited items for your destination post office. For Iraq the prohibited items list is pretty similar to this:

I had assumed that horror comics would be banned, but horror matrices!?! What is this world coming to?!

My attempts to box up and package items for GreenMeat and the goon platoon have not been very successful thus far. I have eight boxes full of items bound for Iraq and the customs forms are totally filled out, but no matter how persuasive I am when I get to the Post Office they just refuse to accept them. It is my sincere hope that you readers will help me identify the problem items in each box. 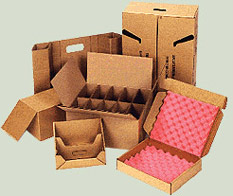 Package #8
Weight: 84lbs, 10 ounces
Contents: 14 Mountain Dew bottles containing a viscous mixture of chewing tobacco and saliva. A Lay's French Onion flavored potato chip shaped exactly like Mary's uterus contained within a blast-proof safe that is also sealed inside a cubic block of Lucite 3 feet to a side.

I hope I can get this sorted out before the winter storms blow into Iraq and the bridge from Kuwait County gets snowed in! In the meantime if you are actively serving in Iraq or Afghanistan or are a veteran of any Middle East conflict suggestions on additional items to include in the real care packages are very welcome. Particularly snack items, favored drink mixes, medical items that can be shipped by APO, etc.

And may Ares the God of War bless our brave American Soldiers and not appear and try to use them to kill Xena again like he usually does.

Hello, Internauts! Livestock here with the tragic news that terrorists have struck this week's Photoshop Phriday! But don't worry, it's all for charity or some such. This week we spotlight an SA Forums Photoshop thread that looks at terrorism through the ages, as reported by the press. It involves time travel and historical inaccuracies, so sensitive viewers be warned! I demand that you click this link right now!