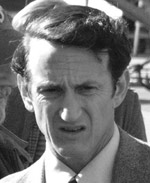 Sean Penn is an Oscar-winning actor and director. He is also well-known for his political and social activism and has been a vocal opponent of the Iraq War and a supporter of Venezuelan president Hugo Chavez. Mr. Penn is not a professional expert on space issues, but he has more than a passing interest in the subject.

Bullshit. It's another distraction the Commander in Chimp and the Cleptocrats want to use to keep your eye off the balls. Balls like Katrina, after years and trillions of dollars what sort of progress have we seen in New Orleans? Another bailout for big insurance and a chance to turn New Orleans back into a white city. Some kids just want to play a pickup game of hoops without being shot in the neck do you think they care about space? 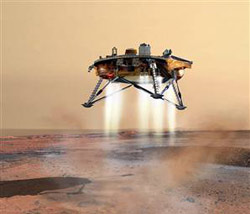 Space is bullshit. When JFK wanted to send us to the moon we were in the middle of a secret proxy war with the Soviet Union over banana farms in Honduras. Do you understand what I am saying? Whoopee, the moon! What an achievement! If it even really happened, which is irrelevant. It probably did, because the government is nothing if not willing to spend hundreds of trillions on some sort of missile or something.

Bloody babies from Iraq are lying in the streets sucking dust through bulletwound blowholes trying not to look at their moms die from a condition caused by American US bombs called nofaceitis and George W. Bush wants to land us a robot on the moon.

Gas is 150 dollars a barrel because fat Americans in their climate-controlled planetary exploration vehicles are petro-addicts looking for a fix no matter how many smartbombs it takes to feed the need. Bush is waving his hand saying "looky over here at this moon we just landed some more bullshit up on this".

The moon. Space. Mars. What have you.

What do the Democrats do? All of them except fucking Kucinich. They approve the budgets. They rubber stamp his (the Murderer in Chief's) corollary of the first, third, fourth, fifth, and ninth amendments. They're as star struck by space dust as the next guy. Some fifty people died from a bridge in Minnesota and they could give less a fuck. Murdered by the bridges Iraq failed to maintain, the moon missions we keep launching into outer frigging space to placate our population. 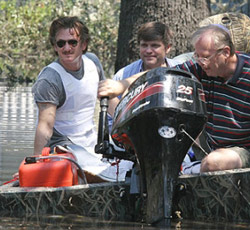 Oh, yeah, I watched. I watched. I wanted to keep both mark one eyeballs firmly tracking every move these war criminals make. Did you see the computer graphics they showed? I watched it on the NASA channel because I refuse to subscribe to 24/7 media circus bullshit like CSPAN. If I wanted to watch my government fuck me I'd type "SAIPAN" into google earth. Try it some time.

Wake up! Did this Phoenix bullshit count for anything? How many hundreds of trillions of cluster munitions have we seeded the bloody fields of Baghdad with, where the only flowers that grow are DAISYCUTTERS and the only schools are those of hard knocks and coffins.

And what will they find up there anyway? What possible nugget of scientific knowledge can they find on the moon? Is their little milspec killdroid going to turn over a rock and find the funding for No Child Left Behind? I mean...All Childs Left Behind. Because they spend trillions a month on Iraq and can't even properly buy kids lunches.

Maybe they can rig a spectrometer to it that can detect clean coal and nuclear technology, another myth just like ethanol to choke our skies and drive us underground. Yeah, ha, spend some more trillions on that.

Have you ever seen a coal miner? I have. I spent a week mining coal in Appalachia to prove a point I left in the comments on DailyKos. I couldn't find the comment to update it because I forgot my password, but I proved the point and I mined the coal and I have the photos sitting in my lightbox to prove it. And the other thing, the coal miners. They're always filthy. You never see one and say "gee, I wish gasoline was that clean".

Yucca Mountain, don't get me started. Maybe they could blast some of that nuclear waste to the moon. Ha! Better yet, blast these people demanding more nuclear energy and suppressing cheap solar and wind energy to the moon. Let them (Karl) Rove around. Land them there. 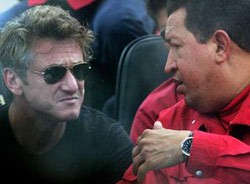 NASA is 100% as totally bullshit as space. It's just another test bed for our next generation raghead vaporizers and fast-acting neurotoxins that only effect brown babies. Static cannons on satellites discharging ball lightning at dissidents. Velcro? Bullshit. NASA is where the laser AND the taser comes from.

Think about that the next time you try to exercise your First Amendment rights in a Central Park West dog park and you end up with Officer Robocop blasting a trillion volts through your central circulatory system. No justice, no peace in the Barkpark, you Hitler Youth fucks.

And the question. The question I have to ask. After all this, why are you surprised?

Year after year you act surprised. I don't know how many more disasters I can go to before it sinks in with you people. Cradling a baby with hyper AIDS in an earthquake zone in Sri Lanka is pretty shitty. It takes a toll on you. If you sheeple fucks weren't spending so much time eating your Pringles and drinking your Uncolas, maybe this space bullshit wouldn't be where it's at.

Get up off the couch you fat American fucker. Volunteer. Get a camera crew. Go somewhere where some shit went down. Don't go to space. Fuck space.