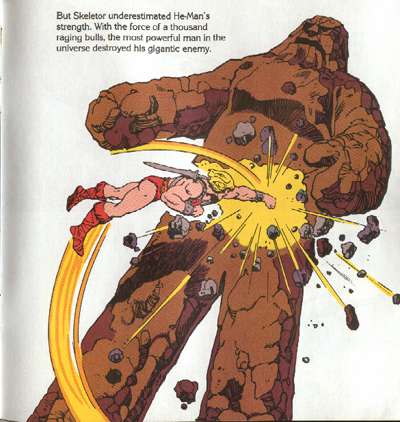 This is what's called the "climax" of the story. In most novels and movies it takes longer than half a millisecond, but the writers behind "The Masters of the Universe" were always trendsetters. I mean, He-Man's pet cat is GREEN! Have you ever seen that done before? Me neither! Revolutionary, I tells ya!

So anyway He-Man flies up and punches the giant Rock Warrior in the groin with "the force of a thousand raging bulls", causing it to be instantly destroyed. You know how vehicles are measured by their horsepower? In Eternia, physical strength is measured by raging bulls. It sure beats their previous measurement of "pecking storks" which (if I'm not mistaken) is used in the Metric system. This also explains why there's so many wars in countries that use the Metric system. 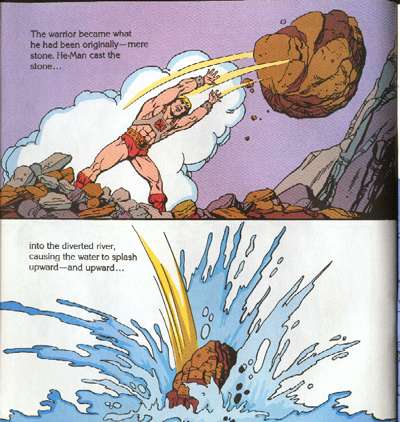 Not having tossed enough shit in the river for the day, He-Man decides to finish the job by throwing the giant Rock Warrior's corpse into the water, contaminating it for decades to come. From that day forward, all citizens in Eternia were under a strict "boil only" rule, requiring them to filter out the deadly bacteria formed from the Rock Warriors' rotting corpses. He-Man didn't give a shit though: the Castle of Grayskull has its own water filtration system! Ha ha! No wonder Buzz-Off wanted to move in!