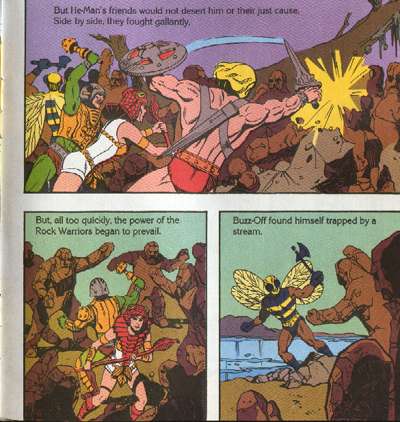 He-Man's friends decide not to abandon him because they probably have nothing better to do anyway. Eternia doesn't have the most thrilling night life community in the galaxy, as all social events revolve around either dancing for the king or eating at one of the seven fantasy-themed Eternian buffets. Plus Buzz-Off was recently kicked out of his parents' house for failing to find a full-time job, so he's been living in He-man's apartment lately... and He-Man has the only key.

True to his cretinous nature, Buzz-Off became the first sidekick to become vulnerable, being "trapped by a stream" during combat. I'm not exactly sure how somebody could be "trapped by a stream" unless they're made of Kool-Aid powder or something. Plus Buzz-Off can fly for God's sake; why in the hell would HE be trapped? The moron's got ONE SINGLE talent: flying. Now he suddenly can't fly and escape the thousands of rock men lunging towards him? What good is the little idiot now except for a laughingstock or Skeletor cannon fodder? This is why many superheroes don't request "obnoxious homosexuals in insect costumes" to join their team. 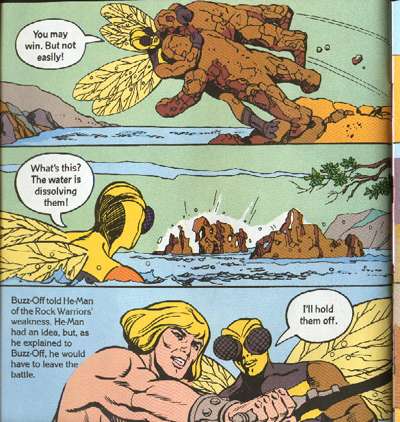 Buzz-Off shrewdly elects to take the great plunge into the stream, which could possibly injure him or get his wonderful little costume his niece made a bit damp. His battle cry of "You may win. But not easily!" instills a great sense of heroism and ultimate victory to all those surrounding him. I think more action heroes should have battle cries like that. Just think how menacing Bruce Willis would sound in his next film when he's under enemy fire and his suddenly springs forth to shout, "You'll probably kill me, but I'm going to try and draw the process outa bit longer to waste your time so you won't catch that TV show you wanted to see tonight!" I'd paid extra to hear that.

Upon falling into the drink, the Rock Warriors instantly dissolve, revealing their hidden weakness: they hate being picked up by homosexual men in bumblebee costumes! But more importantly, water makes them dissolve! He-Man comes up with a great plan but it involves leaving Buzz-Off alone for a few seconds, which are a few seconds that he could possibly slip and blow up half of Eternia. If there's one thing I learned it's to never underestimate Buzz-Off's stupidity.