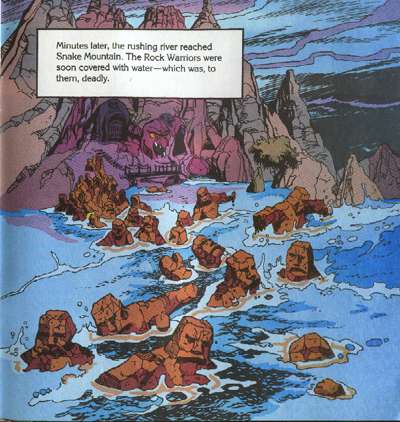 Just like in real life, Eternian rocks instantly dissolve when they come in contact with water. It's like that old game, "Rock, Paper, Scissors, Water", where water beats rock, paper, and scissors. I always used to have a tough time convincing my friends to choose anything but "water", which makes me think I probably should've hung out with some of Skeletor's friends. I bet Two-Bad would've chosen "paper" every single time. Then, after he lost, I would've challenged his other head and it would've picked "paper" as well. Of course if the Eternia Badguy Union was in place and working this would be a moot point, but since it will be decades before anybody on Eternia is ever born with an IQ greater than their waist size, I don't think this is a valid concern. 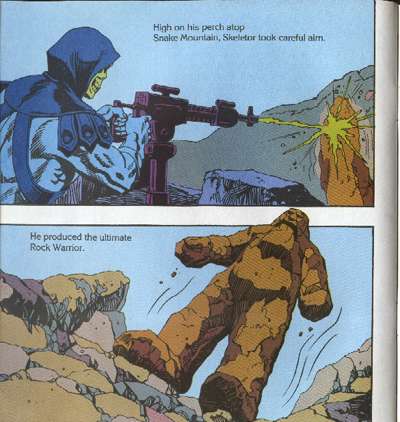 Skeletor's Rock Cannon (or whatever the fuck it's called) apparently has a switch which toggles from "tiny, ineffective Rock Warrior" to "large, ineffective Rock Warrior." It's odd that Skeletor didn't decide to use this until this setting until he's about to have his ass handed to him by He-Man, but considering that his entire battle plan consists of shooting water-soluble rocks with a ray gun, I'm not too surprised. The "ultimate Rock Warrior" suddenly springs to life and has those little motion waves appear to the right and left to it, indicating that it is perhaps wobbling around in a drunken frenzy. If I had to work for Skeletor, you can bet your white ass that I'd be piss-drunk as well.