Monday, Jan 29, 2001 by Rich "Lowtax" Kyanka
It's storytime, ladies and gentlemen! Today comes the story of "Masters of the Universe: THE ROCK WARRIORS" (in all capital letters so to suggest importance). A special thanks goes out to MoneyMark who scanned in the wonderful storybook for me to review. On with the tale! 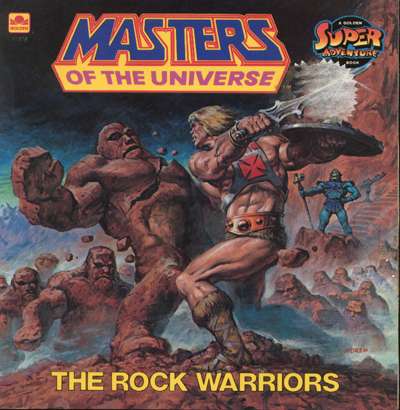 To prepare for this literary giant, I decided to familiarize myself with the concept of "Rock Warriors" so I would presumably understand the backstory leading up to this complex tale. Having studied Computer Science in college, I believed myself to be way out of my depth when it came to Rock Warrior knowledge. If you were to come up to me on the street and ask if I knew the favorite pastime of a Rock Warrior, do you know how I would respond? I would probably punch you in the mouth and walk away. While this doesn't really illustrate my poor knowledge of Rock Warriors, it does show that you should be careful what you say to random people on the street.

I searched on Google for "Rock Warriors", and I was unpleasantly surprised by the scarce results. Although Google was able to pull up roughly 147,000 entries, it didn't seem as if a single one of them pertained to the Rock Warriors eluded to in this book. Here were the closest entries I could find: 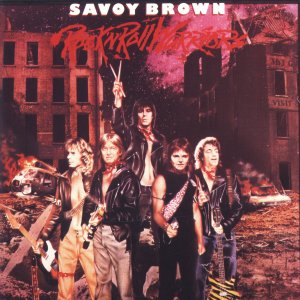 While this plucky band of strapping young lads definitely did seem to embody the spirit of "warriors" (notice the destroyed city surrounding them), a closer inspection will reveal that not a single one of them is made of rock! Obviously this band is merely attempting to capitalize on the Rock Warrior fad of the Internet, and I wouldn't recommend anybody to purchase this low-quality recording (despite the fact that they have a song entitled "Street corner talkin'").

Once again, Google returned another band shamelessly trying to reap their ill-gotten gains through false advertising. The "Hentai Warriors", who appear to have enlisted the services of Howard Stern / Loonyboi (left), are quite the talented assortment of musicians. Be sure to check out their band's webpage on mp3.com, which includes such wonderful song descriptions as "This one is our power ballad, it's about how difficult it can be when you have a broken heart and the flame still burns./Esta cancion es nuestra power ballad, se trata sobre un corazon roto." Rock and roll transcends all languages, folks. The universal theme of "rocking out" speaks to the HEART.

Since I wasn't able to find any real articles or information regarding Rock Warriors, I decided to blindly leap into the story. Get ready folks, because here it comes.