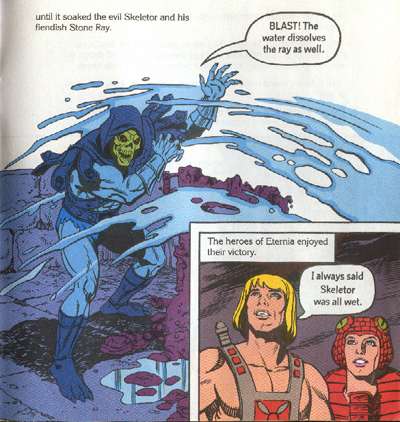 In a truly shocking moment displaying one of the most unfortunate engineering design flaws in history, Skeletor is doused with water from He-Man's boulder toss. Skeletor isn't concerned that some of the blue coloring in his tights may run, but he's instead worried about his ray gun which is melting at unbelievable speeds. Unfortunately, the gun was crafted from the same water-soluble boulders as Skeletor's Rock Warriors, making the engineering process highly dubious at best. Apparently ol' Skeletor was pretty much expecting this to happen, as his deadpan "The water dissolves the ray as well" comment is written with the same inclination as "I just cleaned my oven." He-Man takes the opportunity to make a joke which would've just killed the audiences in the 1920's, accusing Skeletor of being "all wet." This was funny because Skeletor was actually wet from the water He-Man splashed on him! Ha ha! What a gas! Note that Buzz-Off isn't pictured anywhere in that panel, so it's safe to say he's to the right, masturbating into He-man's sandals. 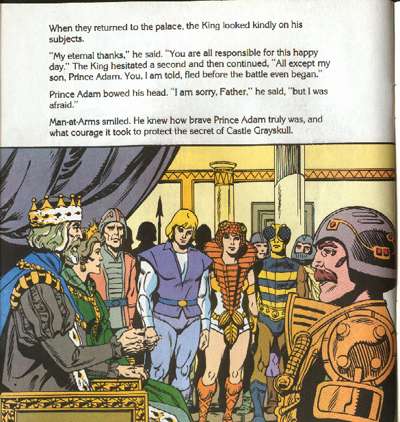 The king, who hasn't bothered getting up from his gold throne in over 50 years, thanks everybody BUT He-Man / Prince Adam for saving his pasty white ass. Prince Adam has to bow his head in shame and suck it up while Buzz-Off and Man-at-Arms get complimented for helping destroy a total of two Rock Warriors. If I were the king, I would've said, "Thank you all for saving my fat ass from being molested by Skeletor and his army of rocks. Well, I don't thank you, son, because I heard you ran away and made the goon in the bee suit beat up the rocks for you." Then I would've put him in the guillotine and given that idiot Jeremy the heir to my throne because while Prince Adam was out wetting his pants at the thought of being hit by a walking boulder, Jeremy was knitting a potholder that said "I LOVE YOU, DAD" on it. In perfect cursive.