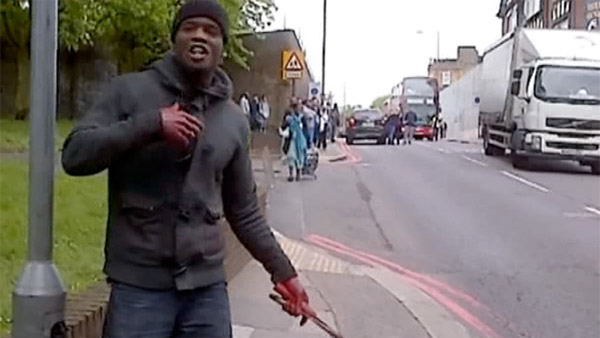 In a shocking incident in broad daylight on the streets of London, a man made some decent points about foreign policy after brutally murdering a soldier. Witnesses stated that the man calmly explained his political views following the mutilation and decapitation of the victim.

"I get what he's saying," said one witness. "Our governments have been bombing a lot of innocent people lately. I don't think it's intentional, but it happens. The governments seem to have all the money they want to spend on war while cutting back on everything else that matters. I kept thinking, wow, this guy who used a machete and a butcher's knife to cut off a person's head really knows his stuff."

Other witnesses were similarly moved by the blood-soaked murderer's insights.

"You hear about things like this happening, but I never imagined I would see it happen on my way to work. This guy just came up, waving the machete, and laid it all out there. Everything that had been wrong with the country."

"He screamed 'send your soldiers home and have peace!' as he swung his knives around," described one woman who was slightly injured running from the scene. "I guess he wanted to tell it like it is after decapitating that poor man."

Advocates for a return to less interventionist foreign policy by the US and its allies hoped the recent comments made by heartless killers would help to shape the international conversation.

"Washington spends all its time talking about how and where to intervene," wrote foreign policy analyst Glenn Scahill in The Nation. "Maybe this will change the way we talk about defense. I hope the cause of peace can be bolstered by the credibility of the man who ran over a soldier walking on the street and then hacked at his body with knives."

The comments are just the latest in a string of discussion about US and UK foreign policy by people who just committed murder. In the United States, the Boston Marathon bombers, Tamerlan and Dzhokhar Tsarnaev, cited US attacks on Muslim nations and civilians as the main motivation for building bombs that killed a child and several others.

"Yeah, I saw that on TV," said one man who described himself as a Kid Rock fan. "The screaming and the smoke from the explosion. It made me stop and think; it's been, what, ten years? Twelve? Enough is enough already. Let's stop bombing all those countries."

A man linked to Boston Marathon bomber Tamerlan Tsarnaev was shot and killed by FBI agents Tuesday during questioning about a grisly 2011 triple murder.

"We do not know his views on the war in Afghanistan at this time," stated the FBI spokesman. "We will be pursuing all the leads we can find and will release details of his opinion on drones and Syria as they become available."

Law enforcement officials believe the deceased man may have been an accomplice of Tsarnaev in the execution-style killing which produced no white papers nor public comments about US military presence in the Middle East.

In London, concerns grew of escalating opinions as members of the anti-Muslim English Defense League took to the streets in angry clashes with police.

"More troops in the Middle East," shouted one pensioner as he smashed in the window of an Indian grocery. "Let's send our boys away from home."

"England for English! War for oil!" agreed another EDL member.