Monday, Jul 02, 2007 by Jon "@fart" Hendren (@fart)
~*~ FYAD ~*~
Reppin': liquidator vrunt
"FYAD is the cool place to hang out. You can find most of the cool people there. In FYAD you can just chill and do whatever and totally relax. "Take it easy" is the FYAD motto, for example, that's how laid back it is there. Show up if you want to have a good time. Another good reason to show up is if you want to hang out with friends." - C. Cardigan

Big Johnson rating thread - Some guy drove up in a limo and paid my friend Todd 30 thousand dollars to use his likeness on Big Johnson t-shirts. Todd has 3 girlfriends and he lets me hang out with him as long as I do his chores for him.

hey lol chris benoit died - Chris Benoit died and bad posters ruined the tribute thread. Someone flamewar these jerks in Helldump, they're scum and they make me mad.

lol i got my picture taken on thecobrasnake - Scroll really fast in this thread and stop whenever you see a picture. The second page only has two pictures but one of them is naked girls.

i heard that the basement dwelling goon killed himself - BungMonkey lives in filth. He's trash and knowing he exists makes me kinda depressed. There are pictures of his disgusting room in this thread and also people asking him a bunch of questions that are mean and funny. This thread is in the goldmine now so you know it's good.

this thread is nothing but pictures of a goon wedding - There are a bunch of pictures of a wedding in this thread. These people are all gross they look like they eat toxic waste. Congratulations to the bride and groom. 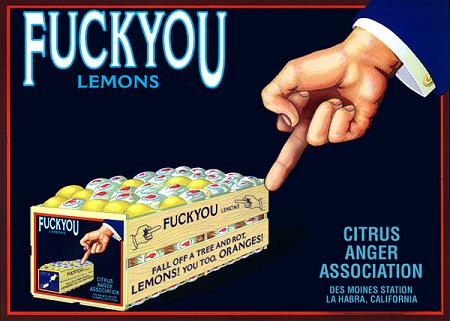 MSPaint Sorcerer Kittens Wearing Party Hats & Riding Segways While Battling - "Hey guys, I just stopped by this thread to let you know that even though I can't stop myself from reading MSPaint threads I hate them with a passion and can't wait for the day Lowtax bans them forever. Voted one, but can't move on with my life."

The Dwarf Knight Adventures - Once you have incurred the wrath of the wheeled Dwarf Knight, not even death can save you. Because hell has wheelchair access.

Vintage Fruit/Vegetable Labels - Brings me back to the good ole' days of casual racism, subservient women, and heroine cough drops.

Confessions [NWS and most definltely NMS] - No pictures, so it's worksafe. Sometimes I'm really jealous of people who have horrible lives because they have the best stories. Then I ask my parents for some more cash and drive around in the new GTO I got for my sweet sixteen.

i will play for you the banjo - I have picked for you this thread.

And I thought they only chose poor names in Japan - Haha, a lot of these signs are vaguely sexual in nature! Double the entendre, double your fun.

Immigration Bill fails - won't be seen again until 2009 - With the failure of President Bush's immigration legislation, some wonder what the implications will be for the remainder of Bush's term and for the 2008 election.

Nuclear Power: What's the Beef? - Is glowing green the green solution to our fossil fuel problems?

Warren Buffett - Tax the fuck out of the rich. - One topic certain to bring debate is taxes. Death, surpisingly, rather dull.

Cheney's refusal on oversight and record keeping. - Has Cheney's stiff back set the White House on a collision course with the congress?

Supreme court - Seperation of church and state? - who cares - Is the wall between church and country standing tall or showing some cracks?