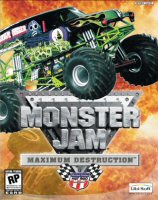 At a Glance: When you read the title “Monster Jam: Maximum Destruction”, you expect that the opening of the game will include the title being growled by one of those TV announcers who sounds like he’s been eating gravel and inhaling chimney smoke for the past eight years. Sadly that never happens anywhere in the game, nor is the player ever mocked for his foolish decision to purchase an entire seat when clearly the edge would have been sufficient, so even the small amount of entertainment I expected from this pisspile never materialized. That left me with what amounts to a shitty Twisted Metal knockoff, only it doesn’t involve an angry doctor who ruins a man’s life by surgically removing his eyes, teeth and all the cartilage from his nose. As it turns out, playing this game is much more painful.

Monster truck racing is a sport designed to appeal to low-functioning individuals who are easily entertained by loud noises. These people, who populate such well-known locations as the GameFAQs forums and Texas, are just about the worst possible demographic you could market a PC game to, mostly because for every one dollar you earn from sales you’ll need to waste two dollars paying tech support personnel to handle calls from irate customers whose game no longer works after they broke the disc in half and fed it to the family hog. Similarly, Playstation 2 games about monster truck racing are designed to appeal to confused redneck youths whose parents accidentally purchased a PS2 after confusing it with a toaster. PC ports of Playstation 2 games about monster truck racing, on the other hand, are designed to appeal to dumb people named Taylor “Psychosis” Bell who routinely subject themselves to horrible games so that other people named Rich “Lowtax” Kyanka won’t turn them in to the INS and get them deported back to California. 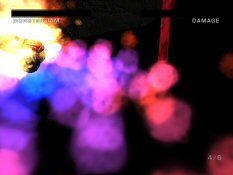 I think my truck broke.

With any vehicle-based game the physics engine should be the #1 concern for the developers, but it appears that for UbiSoft the physics engine was around the #583 concern, right below the font choice for the black panels on the box that advertise “MAXIMUM PERFORMANCE! MAXIMUM DAMAGE! MAXIMUM WEAPONS!” Maybe it’s just my ignorance of the fine sport of monster truck racing, but I’m fairly sure that when you turn the wheel right on a real monster truck it doesn’t immediately lurch to the right and proceed to slide around in circles for the next half hour. Aside from that slight inaccuracy, the game also is very inconsistent about punishing you for running into objects – running into pillars or any of the decorations built into the level will cause minor damage to your truck, but hitting the walls of the level itself will never cause the slightest amount of damage, even when you plow at full speed into a stone wall. Also your truck slips and slides everywhere whenever you try to stop or change directions, which suggests that either the developers have never heard of friction or every single arena is made entirely of banana peels. 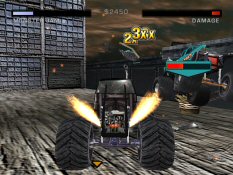 Taking a hit causes wrenches and car parts to go flying in all directions, and I wish I knew why. Oh wait, no I don't.

To go along with the amazingly sloppy physics engine, the boob who designed the Season mode was somehow able to create the most boring experience known to mankind, possibly with the use of precise scientific instruments like slide rules and toothpicks. An Exhibition in this game consists of a single match, while a Season requires you to play through a series of matches to see if you can survive. If you can’t it’s no big deal, since there aren’t any rewards for completing a season and you can experience all the depth and subtlety of Monster Jam in the first five seconds of play.

Matches are simple demolition derbies, and winning them requires you to sit through a clusterfuck of cars sliding around and humping each other until everybody but you runs out of health. Step one is picking a car, which is made a lot simpler by the fact that none of the cars differ noticeably from each other in any way. Once the match starts you can drive around trying to collect powerups and weapons, but since five solid seconds of machine gun fire does less than half the damage of a collision, you’re better off ignoring all the items. UbiSoft attempted to add depth to the matches with “multi-tiered levels”, a gaming term famous for sounding a lot cooler than it really is. All that means is that every single level consists of several big open rooms connected by narrow passageways, most of which you have to uncover by knocking down walls with your truck. For those of you who can’t imagine that a game with this exciting gimmick could possibly be bad, let me remind you that multi-tiered environments were prominently featured in Clay Fighter 63 1/3.