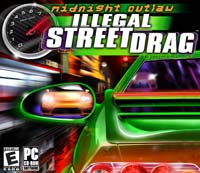 At a Glance: If you live in the United States, and by god you’d better, you’ve probably witnessed firsthand the devastation caused by a group formally known as the Noisy Morons With Noisy Cars Society. Most of the members of this group, whose name has been officially shortened to “RICERS” by the Association of People Who Don’t Care What Letters in Acronyms Stand For, can be spotted embarrassing themselves daily by “tooling around” in a Honda Civic whose engine was modified to sound like a thousand angry hornets gargling in unison. Canopy Games, the boneheads who made Juggernaut for Quake 2, apparently decided that this demographic was really itching for a PC game that captured the incredible thrill of pushing down on a pedal and holding the wheel steady for a few seconds. They forgot that ricers just don’t have time for games in their busy lives, since they spend 20% of their time flunking out of all their classes in school, 40% of their time driving around blasting shitty techno and the other 40% of their time at home begging their parents to buy them a bigger muffler.

Normally I would criticize a company for coming up with a stupid idea like this, but in this case I think Canopy Games was wise to decide that the only demographic that would ever want to buy one of their games would be the “spends money unnecessarily and has suffered irreparable brain damage from inhaling NOS fumes for six hours a day” group. Sadly, as noted above this group never plays PC games, as they have a genetic inability to enjoy any activity that has nothing to do with loud noises and/or “The Fast and the Furious.” But I guess I shouldn’t claim ricers don’t contribute anything to society, since they singlehandedly keep the glue-on LED industry and a large number of second-rate DJs in business. 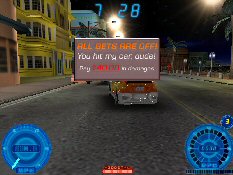 Seeing a ricer can also brighten your day, as I discovered a few months ago when I was driving down Grady Way and I saw three kids in an orange Honda with a spoiler that was made out of wood – from what I could tell they had glued together wooden blocks in the shape of a spoiler and duct-taped it to the back of the car, and they were cruising down the road in the “gangsta slouch” position while the wooden spoiler wobbled behind them. That hilarious mental image, along with the mixture of derision and pity I felt, will be with me for my entire life. If it weren’t for those brave little ricers this would not have been possible.

I now have the same feeling of derision and pity toward Canopy Games after playing this shitheap. Aside from having just about the dumbest name ever, narrowly edging out Divine Divinity and Big Mutha Truckers, Midnight Extreme Totally Awesome Outlaw Mega Badass Vrooooooooom Street Racing has about as much actual gameplay as your average screensaver, only with significantly less sophisticated graphics. Street Drag attempts to capture the excitement of driving to some random street in the middle of the night, waiting until no cops or parents are around to “bust” you, and then driving really fast for a few seconds in a cheap import Honda with a $2500 stereo system and a tailpipe big enough to comfortably accommodate a bowling ball. Naturally this attempt, much like everything associated with either Canopy Games or Valu-Soft, failed spectacularly. 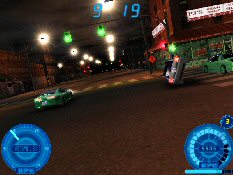 I knew I should have taken the anvil out of the driver's seat before I tried to race.

The object of the game, helpfully described as “race to win”, is to “hit the streets” and win races against a large number of people who apparently have nothing better to do than sit desolately by the side of the road like a sad little puppy dog and wait for someone to come up and ask them to race. When you challenge someone to a race they give stupid responses like “You’re on. I’ll wait for you at the finish line!” which you could give in real life if you wanted to have your car or your face keyed. After you compete in a 20-second race for what is typically a really small bet, you get kicked back to the main screen and you can use the tiny sum of money you earned to buy part upgrades, each of which increases your car’s maximum speed by 0.02 miles per hour. There is actually a way to get a Game Over – if you lose a race and you don’t have enough money to pay up the other guy decides to simply take your car. Naturally you don’t really mind this or put up a struggle, since apparently your character is a very easygoing and gullible individual. You know, like the guy at Canopy Games who said “Hey Bob, you know those annoying kids who race up and down the street at 3AM when I’m trying to sleep in the alley behind the Dash-in Mini Mart? Let’s make a game about them!”