Dear Max, you have always been a smart friend to me. You wrote to me and said "Do not go Outside on a mission," then you wrote other things, then you said it an again time! It seemed very serious and scary. But Max, it is wonderful Outside. It is different than you think. I have not seen the woman from your letter, the one whose hair is red and pretty. I have not had a love way or heard the secret Outside words. There are aliens here, but all I have to do is be the violence to them, and the generals say "nice work, son." Sometimes the aliens say something like "Please, I am not alien, I am a human bean," but I will not listen because they warned me aliens are tricksters.

The Instructors told me I could send you my own Reading Time assignment, so you could see for yourself what it's like Outside. Please believe these words and pictures. I hope you will understand them superior grade, so you can join me and we can be heroes together. -- Stevie 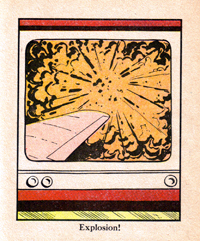 The person who took this photo got his giant thumb in the way, but he can't be blamed because it was a crazy time, and anyway that could be someone else's blown-off thumb that flew in front of the camera. The aliens caused the explosion, or they invaded after the explosion because it made everyone afraid and weak, or else the generals made the explosion to show what the aliens might do in the future unless somebody stops them. 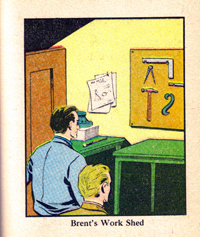 This is where the letters of the alphabet are made. You can see the "T" and "S" and "L," and the parts for an "A," but it's not done yet. Aliens want to sabotage this work shed so that no one will be able to do communication. Now it makes sense, why the Facility teaches us to put stories together using pictures. They knew this day might come. 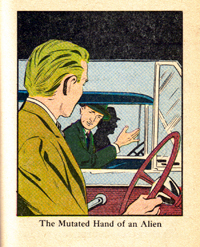 The toughest part of being Outside is telling aliens from normal humans. A lot of times, the generals will do the work for you by bringing you a bunch of fake people, but they feel impressed if you grab a few yourself. First you have to look at their hands, because the generals told me that anyone who makes this -- or any -- gesture with their fingers is an alien. I found that some people had these metal gloves under their skin that made their fingers stay that way, and I asked them about it, but they were already the dead. So I asked the generals, and they said those people wanted to be aliens, which makes them traitors and even worse than real aliens. 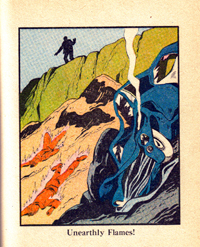 Another true way to find out if people are aliens is to make them catch on the fire. If they are from another planet, they will burn with unearthly flames. If they are normal people, they will burn normal style. Do not pay attention to what they look like in the face part, though, because sometimes humans look weird like aliens after they've burned for a time.