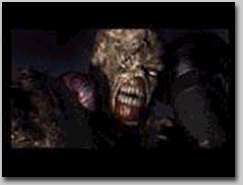 At a Glance: In "Resident Evil 3: Nemesis" Jill Valentine attempts to escape a nightmarish city in ruins while being pursued by flesh eating zombies, hideous mutants, and a relentless new Nemesis. This results in her acting somewhat anxious.

Wow, monsters jumping through windows just keeps on getting scarier every fucking time it happens doesn't it? Fans of "survival horror" games like "Resident Evil" and "Pokemon Snap" will definitely wet themselves when playing this one, but then again the amount of brain tissue that gets destroyed as a result of playing "Resident Evil 3" is enough to make pretty much anyone lose the ability to regulate basic bodily functions.

Once the wheels of justice begin to turn,

nothing can stop them - nothing!

But it may already be too late.

Yeah, I already bought the damn game, it's definitely too late. 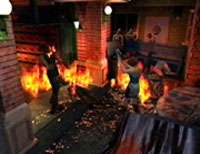 If the zombies don't get you, the slightly different looking zombies will.

Despite the incredible hype I heard about RE3, I began playing it with the preconceived notion that it would be, as FrIgHtMaStEr from www.upcominghorrormovies.com would put it, "not very scary". All that changed about three seconds into the game when I saw something so shocking, so indescribably frightening that... I... I... words just can't fucking describe the sheer terror I felt. I dropped the controller and attempted to gouge my eyes out with a wire hanger, and then, with my other trembling hand, picked up a rusty kitchen knife and carved a crucifix into my forehead, utterly convinced that what I had just seen could only be the work of Satan himself. Finally, however, the Capcom logo disappeared and I was able to regain enough mental composure and start playing the game. Then the real horror began...

In RE3 you play as the star of the original Resident Evil, Jill Valentine, who needs to escape from the infamous Raccoon City. This isn't made very easy thanks to the hoards of zombies intent on scaring you by falling through windows, doors, and other various wall apertures (and by the fact that "Raccoon City" consists mostly of 50 miles of alleyways and wall-to-wall light puzzles). Seems to me like escaping Raccoon City would be pretty damn tough even without the 50,000 zombies.

To make matters worse, there seems to be a big trenchcoat wearing "Nemesis" bent on tracking you down and hitting you. Jill must run away from him whenever possible or else he'll grab her and do something vaguely awful involving a tentacle. He shows up several times during the course of the game. Actually, saying that is like saying the combined death toll of all the World Wars is "several" people. He shows up every fucking five seconds. When he arrives, tense and scary music starts to play as if to say, "Look, it's the Nemesis! This is a scary thing!" I dunno, maybe Capcom figures that ever since the tragedy at Columbine High School last year, we Americans are frightened by anything wearing a trenchcoat.

I'd say that the biggest nemesis in in this game, though, is "anything that can be described as remotely new". Besides the big trenchcoat dude all the monsters in RE3 are just modified versions of the same zombies, dogs, crows, and other creatures that we've seen in the previous two titles. The only new things I found myself fighting while playing this game were boredom and the urge to smoke the ol' Smith & Wesson and end it all.