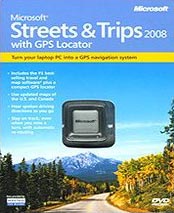 Gamers rejoice! After numerous delays and unprecedented hype Microsoft Streets & Trips 2008 is now available for you to sink your roadmap crazy teeth into!

When one thinks of PC gaming they often think of fast-paced shooters, turned-based strategy games, and minuscule sales. All that is about to change as Microsoft releases the ultimate roadmap software. You never leave the house. You have no where to be. Why would you need mapping software? Stop feeling sorry for yourself you sad sack. Forget what you thought you knew about maps. Streets & Trips '08 changes everything.

Note: This review is based on the 2007 version of the software because the 2008 version is $39.99 and the 2007 version was in a clearance bin. It's not like they give us an expense account around here. And let's be honest, it's the same exact crap right? Streets and Trips 2008 is just 2007 with a few graphical tweaks, a roster update, and a new juke animation or two.

I mean, God forbid that I am not aware that a dead end street in Topeka doesn't exist anymore. Boy will my face be red when I try to drive down the phantom road and end up stuck in a vat of molasses. Not surprisingly the disclaimer for the program warns that Microsoft is not responsible for road closures, unforeseen construction, and rogue vats of molasses. Be careful out there, America.

Gameplay: Route finding is the most important part of any mapping software and Streets & Trips 2008 is a little peculiar in this area. While the software performed reasonably well in initial testing I found out that it doesn't always get you where you need to go in the most efficient manner possible.

Take for example a trip I had planned for my family and I to visit the local zoo. From my mansion in the Hollywood Hills the route finder gave me somewhat accurate directions, but halfway through the journey the unpredictable pathfinding algorithm completely took a nosedive.

Microsoft has already made an announcement promising that they will be releasing a patch to fix a bug in the software that causes it to instruct users to murder their family and then themselves. So far 11 people have died due to the glitch and a class action lawsuit has already been filed. Microsoft has promised to cover dead offspring for a period of three years from the date of purchase purchase but the expanded warranty does not cover spouses.

Getting directions and killing your loved ones isn't the only thing Streets & Trips allows you to do. You can also get recommendations on "places of interest". Simply specify an area and how large of a radius to search in and the program will spit out of a list of worthwhile places for you to drag your fat ass to.

Streets & Trips is technically a line of productivity software but there are few productive people left in the United States. In response to this alarming trend Microsoft has attempted to make the software more attractive to some of the less productive members of their audience. That's why for the 2008 version of Streets & Trips the mythical land of Azeroth was added.

Get accurate directions to your favorite raid spots, best dungeons to loot, and up-to-the-minute traffic reports. Below is a screenshot of the Azeroth route finder in action. 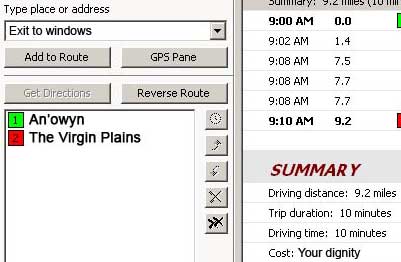