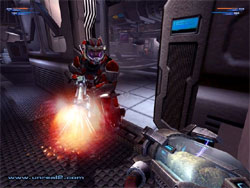 This gun shoots spiders. You know, because we didn't have nearly fucking enough of those spiders on earlier levels!

Grease your wheels chief because this is a railroad to Scripted Eventsville. Board your assigned seat at the start of the level and fire up the shitty weapons you start out with. They're pretty much all indentical garbage except the sniper rifle which is only notable because it's easily superior to the one in UT2k3. Then again, a rotting watermelon with a hole cut out for your dick would be a better weapon than the sniper rifle in UT2k3. You get a couple wacky widgets late in the game but you'll hardly even have a chance to use them because you'll probably be too busy not playing this game. The only way most of the levels could be any more linear is if they disabled the strafe keys and changed the title to "House of the Unreally Fucking Dead." There are a few exceptions to this but even those levels tend to be more lackluster than the rail-shooter ones full of exploding barrels and green lighting.

The wonderful selection of truly innovative and interesting weapons in Unreal 2 helps to spice up the action. Let's take a look at the firepower lineup.

Dispersion Pistol - Unlimited ammo, can be charged to fire a slightly less shitty "super shot". You know, the exact same goddamn gun they ripped off from the original Unreal. This is one of the first games I've ever blamed for ripping themselves off, and in the end the consumer is left feeling ripped off.

"Grace" Giant Pistol - Whoah, the Desert Eagle isn't just for spastic Counter-Strike retards anymore! Whip out this hand cannon and be amazed at the fact that it does more damage than a rocket to the face.

Futuristic Assault Rifle - In the crazy workaday world of the future, assault rifles won't have time for bullets! Instead they will shoot crazy crystal shards that seem ridiculously underpowered and vent toxic dust from the side to remind you that, hey, this ain't your grandpappy's assault rifle!

Flamethrower - Yeah, look out, who is the kook that came up with this one?!? A flamethrower? In a first person shooter?! AMAZING! The flamethrower looks pretty but is basically worthless against everything but the lame spiders that spew out of Epic Game's bloated, infected gloryhole.

Sniper Rifle - Every FPS game needs a sniper rifle, and the "Widowmaker" in Unreal 2 fills that slot admirably. It is probably the coolest weapon in the lineup, with a neat-looking high capacity "Future Scope" zoom. Either way it's the only thing in Unreal 2 that's actually cooler than something in Unreal Tournament 2k3.

Rocket Launcher - It shoots rockets. ARE YOU FEELING THE ADRENALINE RUSHHHHHHHHHHHHHH? No? Me either.

Grenade Launcher - Like the rocket launcher only slightly worse. If you want, the game offers a shitload of different grenade types that you will never have any reason to use under any circumstance whatsoever. In fact, throughout most of the game I forgot I had this weapon and even when I did remember I chose the dispersion pistol over it. Lowtax claims he finished the game without ever knowing there was a grenade launcher, and I personally believe him because he's the only thing possibly more retarded than this game.

Spider Gun - It's not enough that they gave us a whole stage full of spiders, oh no, they had to remind us of how much that level sucked by adding a gun that shoots spiders! You can either fire a mass of tiny ones at the enemy that just do damage or you can lay a spider egg with alt fire and conjure up a supremely useless spider helper that files your taxes or something.

Floating Balls - Who cares? You get these on like the second last mission. You can put them in orbit around yourself to do nothing or you can throw them at an enemy and then kill the enemy before they do any damage with a more useful weapon.

Laser Beam - A ripoff of that water cannon Mario has in Mario Sunshine only somehow even gayer.

The Black Hole Gun - Kills anything in one shot and has unlimited ammunition. Unfortunately, by the time you get it, you'll have already uninstalled the game out of sheer apathy.

Armed with this large arsenal of worthless shit, you will take on all manners of forgettable bad guys but not before the quartermaster / mechanic / generic grizzled veteran / confirmed rapist on your ship babble endlessly about every single goddamn gun, very presumptuously thinking that anybody gives a flying shit. Once you get off the SS Boxcar Spaceship, you will soon learn that some problems can only be tackled by using the brain! For example, there's "the reflective surface room", an annoying jumping puzzle featuring gleaming reflective cubes and laser beams that was blatantly inserted because someone on the team didn't think they had shown off enough of the engine's reflective surface effects. Yeah, that looks nice fellas, especially when I am standing an inch away from a mirror yet my generic alter-ego is not reflected in it!

I remember when Duke Nuke 'Em 3D had mirrors in the bathroom and you could see Duke in them. Has technology still not caught up with 3D Realms? Way to go on those surface effects guys! Maybe 3D Realms hasn't made a new goddamn game in the last two decades because they're trying to develop a mirror big enough to reflect all of George Broussard's image at once without requiring a one gig video card.

There are also plenty of switch and key card puzzles, which is at the height of gameplay innovation and every fan's favorite way of telling a story! I don't want to be mean though; a simplistic scavenger hunt even in Unreal 2's clunky engine is more fun than hearing any more plot exposition from your dull cretin shipmates who make the game sound like "Aliens" filtered through a kindergarten reading comprehension class.

Probably my biggest complaint about Unreal 2's gameplay is the sheer volume of obviously scripted events. It's exciting when a monster suddenly crashes through a wall the first time it happens, but what's not exciting is walking from room to room where each contains an event set-piece waiting to be performed by a troupe of actors more wooden than the Rape Stick up Lowtax's ass. Particular offenders are a level where literally three rooms in a row featured scripted events which I could tell how they would play out before the first goddamn person talking could finish their sentence. After sitting through one of these, I took to firing grenades into the room as soon as possible, hoping one would ricochet off the wall and cause my monitor to physically explode.

Worst of all by far was the final level of the game. You're on board a self-destructing ship after anticlimactically killing the horrible bad guy - hope I didn't spoil anything for you - and even though the game wants you to think you have to hurry to escape, it's painfully obvious that the dissolution of the damaged vessel hinges entirely on you walking through doors sequentially. Oh no, the ship is coming apart at the seams now because I just ran into the escape capsule room! What ever will I do? Rather than answer that, I exited the game and uninstalled it because I felt like a dirty hooker.