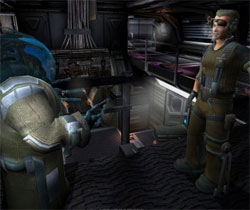 There's no getting around the fact that the plot of Unreal 2 is intended to be its strength but is by far its greatest weakness. The plot is abysmal and I am not going to restrain myself from spoiling the fuck out of it when I make fun of it, so if you have wasted money on the game stop reading and instead skip to the numbers telling you what your opinion is. If you've played more than two missions and have any intelligence whatsoever, you probably already know exactly what is going to happen for the rest of the game so you may as well keep reading.

In Unreal 2 you are John Dalton, a futuristic space marshal who got kicked out of the marines for something I cared about so deeply that I have no recollection of what it was at all. You and three other misfits patrol the galaxy in your spaceship of justice looking for trouble, and Unreal 2 begins with you finding such trouble. Some shrieking faggot colony has been taken over by goofy and obnoxious Skaarj slave warriors who repeatedly emit the "Famous Hollywood Sound Effect #43: Animal Shouting" sound effect.

It turns out the Skaarj and a couple of one-dimensional evil corporations are after some artifacts that, when combined, activate an all-powerful galactic weapon. Rather than taking place entirely on a ring-shaped artificial planet called "Halo," you actually get to fly around to different planets and look for the artifacts. It's like "Indiana Jones and the Temple of Doom" only that blonde woman has been replaced with a red-headed strategist in a leather belly shirt, a gruff technician you want to punch in the face, and Short Round got swapped out for a dopey alien navigator made out of a 50's jukebox and some radioactive semen. Also, all entertainment value has been sapped from it and the game is about as non-linear as watching the coal-cart scene of "Temple of Doom" and being able to both rewind and fast forward it through the magic of your VCR remote.

The variety of planets you travel to and shoot people and aliens on include a science lab overrun with spiders. I mentioned this earlier but I really can't heap enough hatred on this level. The whole thing is explained as proximity to the piece of the artifact on that planet caused some spiders to grow a giant queen and take over the base. Similarly the living planet seems to have come to be because of proximity to the artifact, which means the artifact is your basic "it has whatever random crap we want it to at the time" plot device. There are a few defensive missions where you set up turrets and have to protect something worthless for one forced plot reason or another, and these are the high points of the game. Even though they may be the most fun missions, they are still full of annoying shit.

For example, it's the year three million or whatever and people are shown using all kinds of communications equipment, yet you are forced to walk up to and "use" soldiers to get them to go to various locations. The fact that the gun turrets are fairly effective at stopping the enemy is annoying as well, since it serves as a testament to how shitty the bot AI is. They usually just run from different directions at the turret en masse and only ever take them out because you put it in a totally retarded spot like directly behind a futuristic tree or there were just too many enemies. Conversely, when you're playing it's extremely easy to disable or destroy turrets. 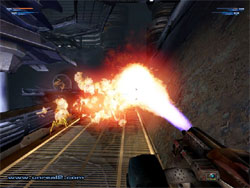 The flamethrower is very well done, and here you can see it killing the only fucking thing it's worth using on.

Once you have all five pieces to form the artifact super galaxy blaster ultimate weapon thing, you are betrayed by a commanding officer who wants the weapon for his own personal gain. What a shock that turned out to be! Also he destroys your ship and kills your crew and it's so sad because now who are you going to be forced to spout clichés to in between missions?!? No one, because that's the last mission buster! You go to his ship, he activates the artifact and all of these aliens who were slaves to humanity suddenly turn into enraged black-hole shooting monsters. Yes, they shoot black holes, but fortunately when you kill one it drops its black hole gun and you can now use it for the five remaining minutes of the game.

After catching up with and killing the commander that betrayed you, the ship starts to self destruct and you have to hurry through the previously mentioned series of "ship damage event triggers" to the escape pods. Hitting all of the ship damage check points knocks out the gravity and makes the environment start slowly rotating. This produces a sensation that is a mixture of nausea or motion sickness and soul-deep rage when you're trying to find the one active escape pod in an poorly lit spherical room. After two attempts I gave up. I'm sure there was a touching ending but frankly I was so disgusted by everything up to that point I had no interest in seeing it. (NOTE FROM RICH "LOWTAX" KYANKA: The game ends with your macho hero marine biologist in space fondling himself in an escape pod as he listens to a prerecorded message from Captain Tits talking about saving the lives of the few for a sacrifice with the lives of the many or some other retarded bullshit.)

All in all, Unreal 2 is one of the biggest wastes of fifty dollars I've seen come out for the PC in quite some time. It's obvious that tons of money and development time were poured into it and yet the team couldn't do anything more than rip off and dilute conventions and ideas from a multitude of other obvious sources. Hopefully the people responsible for creating the graphics for the game can get a job working on a project where their talents can be put to better use, like creating Counter-Strike spray can team decails. Maybe even for Halo 2, the game that this wanted to be and failed utterly. If you're dead set on buying and playing an Unreal game then get Unreal Tournament 2k3, as it's infinitely better than this stinking puddle of vomit.