Dozens of people have sent e-mails asking me to mock All Time Low. I finally cleared a space for these clowns, but now it's too late, because they're dead. Sure, a new "All Time Low" album came out this week, but I refuse to believe any sentient beings were involved, given that it sounds like a rogue computer virus infected with Autotune. 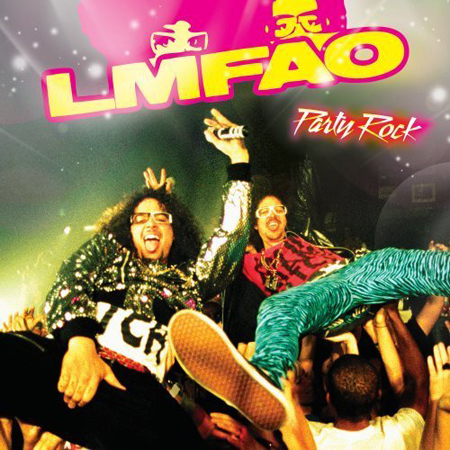 LMFAO: If The Mars Volta looked as fruity as the fruitiest moments of its fruitiest songs.

Before I get to All Time Low, I'd like to address this week's most requested release: Party Rock, by LMFAO. Readers called them "detestable and threatening to the progression of the human race." But I'm hesitant to review these fake-crunk joke bands anymore, because even if I spend most of the article clarifying "I know this is supposed to be all 'Ha ha, we wear neon '80s clothes and sample 'Eye of The Tiger' and call ourselves LMFAO' *activate impenetrable irony shield*, but this shit is still fucking terrible even as comedy music and everyone who was involved in its creation or encouraged its existence in any way should suffer," I'll get a couple hundred e-mails that are like "LMFAO sounds that way on purpose, way 2 fall into there trap, you just got trolled by LMFAO. Now I'm LMFAO IRL!"

Also, completing that assignment would involve actually listening to Party Rock, and I couldn't get past track two.

Next on the chopping block was All Time Low's Nothing Personal, which, while unbearable, at least appeared to be the work of a real band that, some lyrical goofiness aside, considered itself a legitimate musical entity. There's something edifying about criticizing musicians who operate under the delusion they're creating listenable records.

However, as the album proceeded through a monotonous cycle of processed guitars, artificial harmonies and identical chorus constructions, I soon questioned whether a "real band" had anything to do with its manufacture. Nothing Personal plunges into the uncanny valley, going from "generic" to "too perfectly generic to be genuine." Even the "clever" song titles ("Damned if I Do Ya, Damned If I Don't") feel generated by a wacky-quip widget. 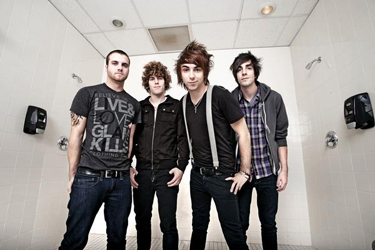 Pop-Punk Simulator 1000, brewed in a test tube with DNA scraped from the bands' bathroom at Warped Tour.

All Time Low wasn't always a soulless animatronic act, though it wasn't ever good. It started as a Blink-182 cover group named after a New Found Glory lyric, which is as unpromising of an origin as any band could have. Like Blink-182, whose comedy routine consisted of baiting twelve-year-old girls into lifting their shirts at concerts, All Time Low wants to be known as "funny." It attepted to cultivate this reputation with the "Poppin'" video, which combines a standard "let's make fun of black people by having white people dress like them" minstrel show with "lol midgets."

On Nothing Personal, All Time Low reminds listeners they should still be laughing. "I want to be laughed at," demands the first song. "Who's laughing now?" adds the second song. "Laughing all the way to the hospital."

I laughed at both of these tunes, and continued to laugh at a roughly one-laugh-per-song ratio the rest of the album. But it was impossible to detect any human intent behind the hilarious idiocy. Hearing these lyrics was like receiving an entertaining random-word spam message: It's hard to determine where to assign the credit for your amusement.

Band members marked with an "X" have been replaced by robots.

All Time Low formed in high school, and while it continues to function at a grade-school listenability level, its members have started trying to establish adult edginess. For example, singer Alex Gaskarth sings "casual fuck," though he pronounces it "foak," perhaps because he forgot to disable the "child-friendly" filter on the software that hijacked his vocal chords. Also, the band devotes "Stella" to the Belgian lager Stella Artois, but this reference won't resonate with the group's pre-pubescent fanbase, who will process it as yet another stupid song about some girl.

Nothing Personal might have been All Time Low's "experimental" album, if the group's members hadn't been strangled by the producers in the studio and replaced with a gay-robot assembly line. Occasionally, All Time Low tinkers with a different sound, only to panic and return to its template. For example, "Walls" starts out as a techno slow jam, but by the 30-second mark it shifts back to formulaic, irritatingly catchy guitar pop. Perhaps All Time Low's members wanted to write an entirely electronic quiet-storm album, and the scattered bleeps and bloops are the only traces of their influence leaking through the album's cold metallic shell, leaving a rusty trail like humanity's last tear.