Like the world's ugliest sirens, The Decemberists lured unsuspecting listeners with gay-pirate sea shanties. On its latest release The Hazards of Love, the group ditches its trademark swishbuckling in favor of furry romance, lisping tongue-twisters, an uncredited Bon Jovi rip, and simple melodies driven into the fucking ground. Huzzah! 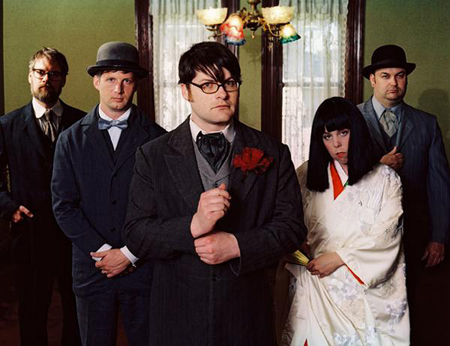 The Decemberists might be the most ridiculous non-metal band I've ever encountered. They look and behave like asylum escapees who tunneled into a drama-company wardrobe closet, threw on period costumes, and emerged believing themselves the primary players in an unending anachronistic production. They write ye olde precious indie music, reveling in aggressive usage of literary devices and folksy interpretations of encyclopedia entries, and their twee performances overflow with corny vaudevillian banter, to the delight of their insufferable teacher's-pet following.

If I have to endure this sort of "entertainment," I'd better be able to get a goddamn turkey leg at the concession stand.

Unfortunately, the Decemberists have recorded a concept album, administering a fatal feyness overdose to everyone within earshot. And not only do the group's fans swallow the whole bottle at once, but also they insist everyone else should do the same: "Well, sure, 'The Abduction of Margaret' might sounds stupid -- if you listen to it out of context!" They claim that individual tracks are irrelevant and concept albums "must be listened to in their entirety, repeatedly." This seems like a transparent ploy to drive anyone with opposing views to suicide, thus preventing critical rejoinders.

Long ago, a hit single, "Mr. Roboto," came from Kilroy Was Here, Styx's concept album about a fascist government banning rock and imprisoning musicians. (This plot was probably a reaction to the underground movement to jail Styx, which was gaining traction at the time.) The director of Poltergeist II turned this story into a short film, during which an android prison guard gets kneed in the groin and exclaims "ouch, my balls!" People appreciated "Mr. Roboto" without knowing any of this shit. In fact, people liked it for its fruity inscrutability and stand-alone bizarreness, the way that the lyrics seemed like random nonsense even though they were really calculated, expository nonsense.

The Decemberists are trying to be more like Styx these days, with their increasing prog-rock pretensions and recent bouts of heavy-metal poisoning, but Hazards of Love can't compete with the melodic variety, narrative coherence, anthemic potential and isolated-single integrity of Kilroy Was Here. And Kilroy Was Here was fucking terrible.

Anyway, it's been several months since The Hazards of Love came out, and longer than that since readers started putting The Decemberists at the top of their shitlists, so I guess I've postponed the unpleasantness as long as I can. Join me as I embark on a harrowing journey into a world of Forest Queens, deer-fucking and superfluous interludes! 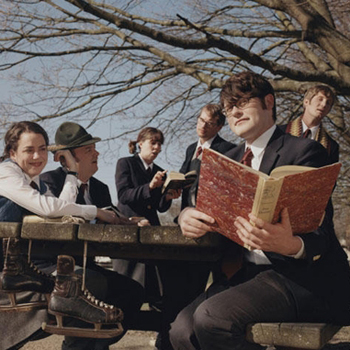 Like the latest Mars Volta album, Hazards of Love opens with 90 seconds of near nothingness. Counterintuitive as it might seem, empty space can be even more obnoxious than actual shitty music, because it's such a presumptuous waste of the listener's time. Do you think anyone paid for this disc just to listen to a grotty bunch of RenFest refugees set their instruments on idle? Fuck these guys.

I'll go ahead and drag track 6 ("The Queen's Approach") and track 9 ("An Interlude") into this discussion. Taken on their own, these instrumental meanderings are completely useless. In the context of the concept-album framework, which uses them to set moods and introduce characters, they remain completely useless. They're functional only as brief buffer zones from the record's three central melodies, which the group relentlessly overuses.

Track 2: "The Hazards of Love"

The title track starts with a decent hook, some upright bass, and -- wait, there's more to the song's title: "(The Prettiest Whistles Won't Wrestle the Thistles Undone)." Fuck, he actually sings that phrase. Twice. The Decemberists lack the instrumental virtuosity to play real prog-rock, but Meloy vocally evokes the genre's wankiest aspects with his gimmicky wordsmithery. Even battling nerdcore rappers would scoff at this linguistic monstrosity.

"Hazards of Love" also starts unfurling the album's ludicrous plot. Fair maiden Margaret encounters a wounded fawn, which suddenly reveals itself to be a strapping lad named William. Upon discovering that the injured deer was actually a person, she promptly decides to have sex with it. This kind of species-shifting storyline was common in ancient mythology, but deer-man-woman sex triangles carry different connotations now in the golden age of furries. Clearly this is the reason weirdos in animal costumes have already glomped onto this album.

"Thou inconsolable daughter," said the sister
"When wilt thou trouble the water in the cistern?"

Singer Colin Meloy's fan mail probably reads like testimonials to vocabulary-builder tapes: "Before listening to The Hazards of Love, I had never encountered words like 'cistern' and 'corncrake.' Now I use them constantly! It's really livened up my interactions with my coffee-shop customers. They used to call me asshole. Now they call me 'Professor Asshole.' Thanks, Colin!"

Also, any lyricists who use "wilt thou" in a rock song should be subjected to the kind of cruel and unusual punishments that were commonplace in the medieval era from which they stole their sentence constructions.