Normally, searching for out-of-print Brokencyde albums would be brutally masochistic. If someone shoots at your head and misses, you don't finish the job for them by finding the bullet and driving it into your skull with a hammer. But The Broken! serves a valuable purpose, comically illustrating how this laughingstock once tried to be taken seriously. 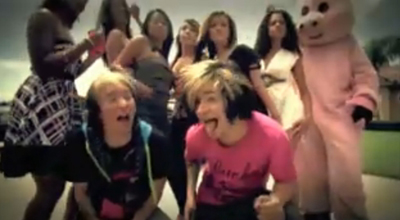 People recently became aware of Brokencyde due to "Freaxxx," a video that combines male hair streaks, Autotune vocals, screaming scenester fags, a Range Rover, a pig mascot, skanks: Pretty much everything that's gone wrong with music, fashion and life during the past decade. It's a punishing montage of America's most embarrassing pop-culture atrocities. But two years ago, Brokencyde sucked in a much wimpier way. They even spelled their name BrokeNCYDE to emphasize how they were "broke inside," the fucking pansies.

On 2007's The Broken!, Brokencyde's currently sub-literate members attempted actual rapping, resulting in laughably prosaic crap like "cigarette breath caresses eight letters of death" and "overpowered by hazel eyes." They also whined a lot about pain, shedding lyrical tears during songs with titles like "Disappearing Hearts" and "I'm Sorry, I Am." Most tantalizingly, they repeatedly promised to kill themselves. ("I could jump off a roof on purpose/Until I hit the surface.") Unfortunately, these suicide vows did not come to fruition, but another self-pitying threat seems darkly prophetic in retrospect: "You made me this way, turned me into a monster."

Brokencyde foresaw that the music world wouldn't be kind to their simpering brand of Linkin Park mimicry, so they formulated their revenge. When the group resurfaced in early 2008, the sensitive poetry and acoustic guitars were mostly gone, replaced by lines like "you make my pee pee hard." Brokencyde still retained a sliver of its ultra-gay original persona, so it reserved space for a slow song about butterflies and rainbows. 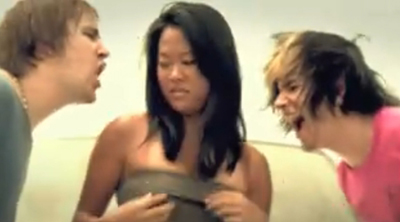 Brokencyde's back-up dancers: Just happy to be there!

When the BC13 EP arrived last fall, Brokencyde's makeover into a minstrel show became complete. BC13 combines crunk, an energetically moronic strain of commercial rap that now exists entirely as a punch line for white dorks, with screamo, which sounds like emo howling while receiving the beating it richly deserves. 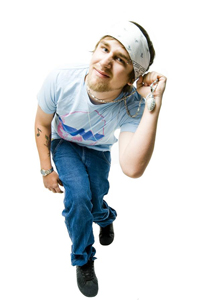 This guy makes Brokencyde's beats.BC13's "Bree Bree," takes its name from Brokencyde's unofficial fifth member, some loser who follows them around in a pink, fuzzy costume. Se7en (the screechier singer, or at least the one who leaves Autotune off) converts that title into a chorus that's about as aesthetically appealing as the caterwauls at a slaughterhouse. If someone used the "Bree Bree" squeal as a ringtone, he'd promptly be sliced through the abdomen and left to bleed to death. Perhaps later the stabber might read about the song, realize the similarities between his victim and a stuck pig, and have a good chuckle at the unintended parallel.

The most generous interpretation of Brokencyde's career progression is that these guys reflected on their miserable failure, realized emo rap is inherently terrible and turned everything they once loved into a self-referential gag. If so, they've gone further in the service of parody than any performers in history. Look at the way these fucking retards dress. No artist has ever endured such self-inflicted suffering, not even that 30 Seconds to Mars fruitcake who ate himself into a gout-ridden gastropod for a movie no one saw.

Also, there's the lingering suspicion that while they're being ironic about crunk, they still consider themselves to be a kick-ass screamo band. First of all, "kick-ass screamo" is so oxymoronic that the conflicting terms cause violent friction, making the phrase burst into flames. Screamo is based on the faulty assumption that people would enjoy emo's sniveling broken-heart songs if only they were louder and angrier. When a baby starts crying in a restaurant, people just want it to shut the fuck up. No one thinks it's really awesome and "hardcore" if the brat proceeds to a full-volume, plate-breaking tantrum.

Antz: Mr. Irrelevant.Secondly, any hypothetical listenable screamo act would need compelling distractions from the obnoxious vocals, certainly more than Brokencyde's generic synthesizer hooks and drum loops provide. Maybe the band could do more with its songs if it had more than one person - some defective Baldwin brother who goes by Phat J - contributing actual music. In addition to the rapper/singers Mik L and Se7en, Brokencyde employs Antz, whose job description reads "fog machine, lights." You'd think the least valuable component of a profoundly useless entity might cease to exist - in this case, perhaps vanishing into theatrically illuminated mist - but Antz and his fucking shutter glasses have evaded oblivion.

I'm perplexed about how anyone could possibly appreciate Brokencyde on any level, but I have some theories.

Brokencyde's stance seems to be "we're just a bunch of funny dudes who like to drink 40 ounces and get laid, fuck the haters!" However, its discography suggests an alternate explanation: "We really wanted to make soul-rending music about our fragile hearts, but no one bought it so now we're reduced to selling ourselves as the clowns of crunk." It's depressing to see Brokencyde achieve any success, but perhaps it's best that the group finds a following. Then, when they think they're popular enough, they'll release another "real" album filled with instruments and feelings, only to bomb again, spectacularly. Now that will be fucking hilarious. 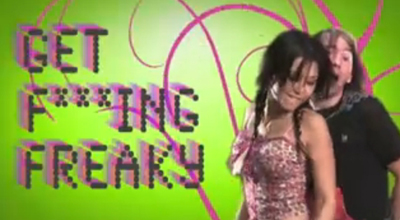