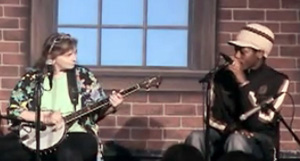 GD: "Banjo to Beatbox" is probably the best song nominated for any Grammy.

DFH: Yeah, I'm liking that. It's probably the best album made for children with ADD since Lightning Bolt's Hypermagic Mountain. But I am kind of confused as to why this music is explicitly for children. I guess the childrens' music section probably has two spots reserved for people who are too weird to put anywhere else.

DFH: I bet there were a bunch of two-year-olds who got dragged there by their hippie grandparents.

GD: I wonder if the children of the stars are familiar with any of these acts. "Yes, Apple, that really is Christylez Bacon, want to wave hi? Oh, too shy."

DFH: Wait, these people don't get invited to the real Grammys, do they? I mean, there is just a Children's Grammys, right? With Steve from Blues Clues presenting.

GD: I'm trying to find out which of these acts has "attending Grammys!" on their concert calendar, between like two grade school cafeterias.

DFH: "The Grammys are when? But I've got the gig at Pinewoods Middle the next morning! Fine, have the Gulfstream waiting for me on the tarmac."

GD: Greg & Steve are shrouded in mystery. None of their videos really show their faces.

GD: Also, they clearly don't play exclusively for kids. Look at around 0:40 in this clip, that's an old, old woman at a children's concert.

DFH: I don't think Greg & Steve actually make music, just hot dance moves. Speaking of which, Ziggy's kids can fuckin' dance. I wonder how many college kids bought this album thinking it was like a collection of duets, and found themselves suddenly missing home.

GD: If there's any group of fans that will take whatever you give them even more than the Christian rock crowd, it's college kids buying an album with "Marley" on it.

GD: Sad thing: Wearing beards to impress little kids. Sadder thing: The kids either not noticing or not caring.

GD: Around the 15-second mark of that clip, a little girl starts throwing shit at the stage in disgust.

DFH: That singer is a bitch, too. She just keeps that ball. "When I'm old, I'm gonna react to balls on my property in exactly the same way." 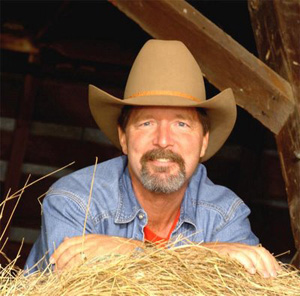 DFH: I wonder how many of Buck Howdy's stories are thinly veiled political criticisms. "Kids, if you eat beans, you fart. If you don't pray in school, you're a fucking communist."

DFH: "A Different Breed" is about parents who get their kid a dog from Mexico as a gift but then it turns out the dog's a rat.

DFH: Now look at this guy. I guess people who make children's albums really fucking love America. "kwg2005" has the best comment: "He came to my school in 1989 when I was in 2nd grade. He was a lot younger then. We bought a vinyl record from him at school. Back then CD's were rare. He used to have a mustache. I think his songs were cooler then."

I think kwg felt slighted, probably, as evidently he or she is now one of those old people kids hate because they won't shut the fuck up about how different everything was. "People had mustaches and vinyl records and the Soviet Union was around." And all they get back is "Mom, I'm trying to listen to this story about snakes and little girls."

GD: "I think your show was the best in the world! It was outrageous to look at you on the stage," Jeff, age 8.

DFH: Well, to be fair, what credentials does a rock journalist have besides "loves adjectives, writes for a magazine?"

GD: I did a search on his testimonials page for "achingly beautiful," and I thought I had something, but it turns out it was just the end of "teaching."