The Most Metal Things Ever!

Some people allege Varg Vikernes stabbed his former Mayhem bandmate Euronymous for wearing a white sweater in public. This is not the most metal thing ever. Rather, it is a warning that during this season of stupid-looking sweaters, people should be careful what they wear, lest they be butchered by some black-metal avenger. That public service announcement aside, it's time to proceed to the trve Most Metal Things Ever list, as compiled by forums users Will "cryme" Allen and Jeff "Charles Mansion" Curran, with art from Ali Horn! 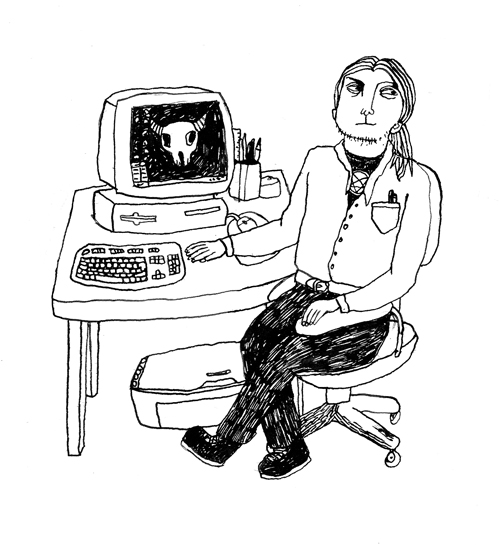 The most metal thing is when you have to adhere to the dress code at your IT job but you wear your Darkthone T-shirt under your dress shirt and unbutton the shirt just enough so that the pentagram at the top of the logo is exposed for all to see......

The most metal thing ever is growling along to Havohej in the shower and your mom comes home and she's just about to tell you that vitamin water was ten for ten at Jewel so she got you some and she hears you yelling SODOMIZE THE HOLY ASSHOLE and stops and just thinks about her life for a minute.

The most metal thing is buying an Ibanez and a Boss Metal Zone Pedal so you can learn to play all the riffs from Whoracle and then letting them collect dust in a closet.

The most metal thing is shoes with spikes on the toe/heel and a dead fetus depicted on the toe. Made by Vans. 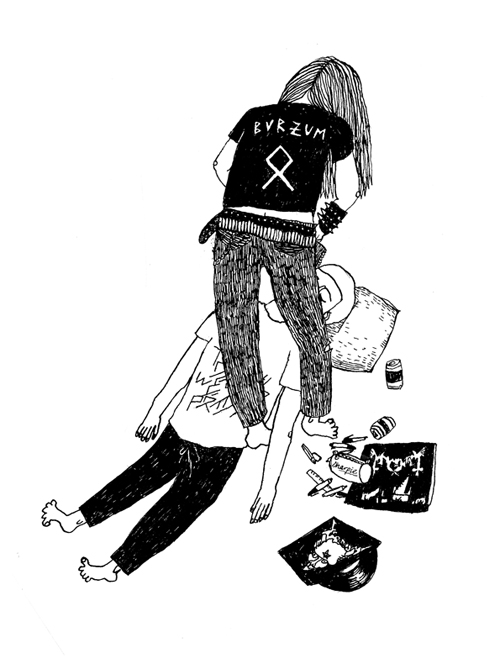 The most metal thing is when you use a fine point Sharpie to mark one of your testicles "Varg" and the other "Euronymous" and then teabag your roommate who is sleeping comfortably in his Devil Wears Prada T-shirt.

I tried that but before I got in his room the Varg nut wrapped around the Euronymous nut (this is called a "testicular torsion," thanks Wikipedia), but that wasn't the most metal thing. The most metal thing was when I had to say "mom my balls hurt really bad" and then I had to show my mom my swollen nutsack.

The most metal thing is when you're air-drumming the intro to "Painkiller" but you're doing it on top a pile of skulls and you personally shit in and fucked (in that order) each one. They're all saints. Also you just got your order of shirts from Cogumelo.

The most metal thing is taking a trip to the Ukraine and then realizing there's nothing to buy there except cassettes and track pants.

The most metal thing ever is going to an NSBM show and then remembering you're black.