Stuff You Will Hate: Best of '09 Exchange!

The meaning of "Stuff You Will Hate" changes depending on the installment, and often during the course of a single column. It can mean "stuff I love, but that you, the reader, will dislike," which describes the acts featured on Sgt. D's original Stuff You Will Hate site. Here, sometimes it means "stuff you will hate, and I hate it as well." And sometimes, it means "stuff you like, and I might actually like it, too, but I'm going to pretend to hate it in a way that will infuriate you because it will be written as a parody of a typical idiot hating something great, and you'll quote the fake blurb to your friends and say 'what an ignorant dick' when in reality it's intentional and now we're laughing at you, you gullible fuck."

This week, "Stuff You Will Hate" means "I'm sending you some of my favorite music of 2009, which you will then wrongly denigrate because, while you're overall a good dude, you suffer from occasional glaring lapses in taste." We bind these beloved songs to the "Stuff You Will Hate" altar, like Abraham sacrificing his son to the Lord, except in this case there will be no divine intervention to prevent the slaughter because our God a) shows no mercy to metal bands b) doesn't acknowledge any role in the creation of some of the crap groups Sgt. D enjoys, let alone show them favor. 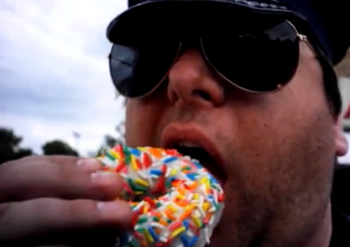 A Day to Remember, "The Downfall of Us All"

GD: In the Jonathan Lethem story "The Happy Man," a character condemned to hell must spend months and months of unmarked days helping a scientist build adorable mechanical animals. While cute metal puppies make wonderful companions, they're tragically unfit for robot wars, but every time the scientist and his damned apprentice must lead their eager creation to the battlefield, and every time he's promptly dismembered by, like, a giant android werewolf.

This is how I picture bands like A Day to Remember. Despite being ill-equipped to play hardcore, they insert lame little breakdowns into their pop-punk songs and consider themselves battle-ready. It's heart-breaking, really, thinking of them high-fiving each other in recognition of what they delusionally believe to be an intimidating level of heaviness. They imagine the contrast between clean Autotuned vocals and the "brutal parts" gives the latter greater impact, when in fact it just stretches their shittiness spectrum. They should have been eaten alive at their first performance.

However, things end a little differently for A Day to Remember. Instead of being torn to shreds by bloodthirsty opponents, they're embraced by clueless fans, the kind of people who bat around beach balls at hardcore shows. This video suggests these dudes gets harassed by the police for putting up fliers, or possibly for just being members of A Day to Remember, but this plot only exists as a vehicle for outrageous cops-eating-donuts gags. No laws exist to deter A Day to Remember, and no giant android werewolves roam the land looking to decapitate them. That's because this is not their hell, but my own. 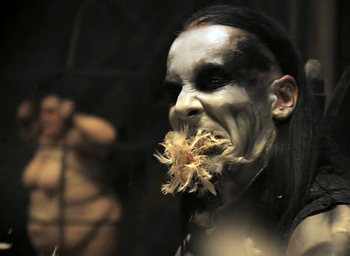 Behemoth, "Ov Fire and the Void"

Sgt. D: This band consists of four balding trolls in makeup. They are from Poland, and from what I remember of the playground talk in elementary school, Polish people aren't the brightest. Back then I assumed it was a joke when they said the Polish navy put screen doors on their submarines, but after seeing Behemoth in action, I'm not so sure.

Mostly I feel bad for the jerk who made this video. Some poor a-hole probably did it for free because he thought it was his "big break," and once everybody saw the jaw-droppingly rad new video from Polish blackened-death metal sensations Behemoth, the world would be his oyster. Say goodbye to toiling away for hours on videos for third-rate Eastern European metal bands in the basement of what used to be the living quarters for the second string of the East German women's powerlifting team, say hello to the good life!

After people saw how this video made feather-eating sinister, he would surely be walking down the red carpet, nearly blinded by the cacophony of flashbulbs going off in his face. And the bit with the neo-Gothic Magneto clone barking commands from his throne... is it too soon to whisper "Oscar?!" Unfortunately for this dude, who is probably as hardworking-yet-dense as most Eastern Euros, being mocked on Something Awful will be the pinnacle of his career.

As for the music, "Ov Fire and the Void," like most metal songs, is about three times longer than it should be, with a nearly constant backdrop of clickety-clackety double bass that sounds like a noise your car would make when it's time to take it to the junkyard. And the lead troll's raspy croaks suggest he still has some feathers stuck in his throat. 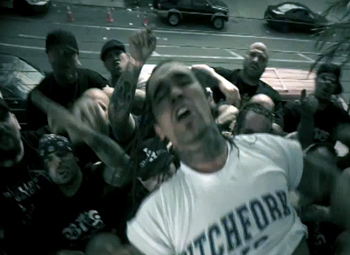 GD: Skarhead raps about fighting, and if you tell them songs about fighting are dumb, they'll probably fight you. I can respect that, musicians who live their aesthetic. Like Varg Vikernes, they do what they like and they like what they do.

This song espouses the slogan "Drink, Fuck and Fight." Why would you hate "D.F.F."? Maybe you're the ghost of Stevie Ray Vaughan, and you're pissed because you feel like they stole that whole sly-smirk-before-closing-the-bathroom-door bit from your brother's band. Perhaps you don't drink or fuck, because you're out of step with the world. Whatever the reason, if you dislike Skarhead, it's likely because you oppose their hooligan lifestyle, rather than simply disagreeing with their musical choices. No wonder they take criticism personally and deal with it violently. On a related note, I'm forwarding all hatemail from this column to Skarhead, with all insults redirected at Lord Ezec. You'll be hearing from him.

Oh, and Sgt. D just informed me that the line "put the straw in the back, fuck breaking the rocks" is some sort of "next-level sleazy," "really fucking gross" coke reference that he understands completely for some dubious reason. 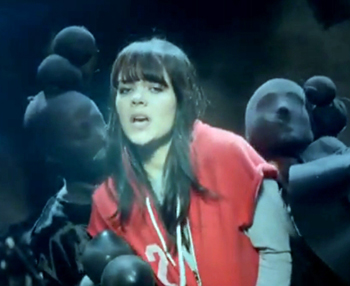 Bat For Lashes, "Daniel"
Sgt. D: An insane fashion design girl I know told me her Halloween costume was going to be gymnast Nastia Liukin. When she asked me if people would get it, I said "Not a fucking chance, but you're hot enough that people will pretend to give a shit about your costume, so you should just do whatever you want." I imagine this is pretty much what happened when Bat for Lashes described her concept for this video.

Here's my best guess at what's going on: A moderately attractive girl with "cute indie bangs" halfheartedly fights off a gang of mimes who attempt to rape her with interpretive dance. The song itself isn't bad, but someone needs to tell her people only pretend to respect her ideas, and that they'd never put up with this kind of bullshit from a fatty.