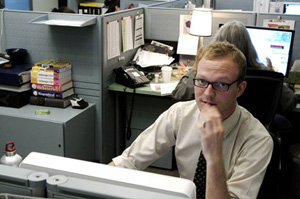 Like Bill Bradley over at Vanity Fair. Granted, Vanity Fair is probably the last place anyone would look for trenchant music criticism, but as much as I appreciate a description like "Did a Finnish grandmother shriek when she ran over a sick cat that just swallowed 50 feet of piano wire? That's what it sounds like," it's clear that Bradley - and the many others like him - are either hamfisted, bomb-throwing contrarians, or simply people who don't have any business writing about music in the first place. Or both.

From wild-eyed commenters at Stereogum to dozens of cranky Blogspot scribes and - I shit you not - an actual LiveJournal community (with three whole members!), there's this small but vocal group of utterly befuddled people who feel the need to point out that Joanna Newsom is something of an acquired taste, one that tends to be acquired by hipper-than-thou dickheads who were just recently telling us how awesome Clap Your Hands Say Yeah was.

Rain is wet, fire is hot, Joanna Newsom makes superficially goofy, peculiar music for superficially goofy, peculiar people. It's hardly an original observation, and by making it, one only reinforces the passion of Newsom's fans and their (entirely inaccurate) assumption that they're listening to "challenging music" that simple-minded mainstream music fans couldn't possibly "get." In other words, you're actually encouraging some of the most insufferable people in the world to be more insufferable.

Which, when you get right down to it, is way worse than digging a nine-minute song with a hurdy gurdy in it.