White Wizzard, "Over The Top"

GD: Related video: Cauldron, "Chained up in Chains." Is it possible to listen to new "vintage" metal bands that aren't jokes? And the people who says this is "the way heavy metal is supposed to be," do they mean "a joke"?

het: I can't tell you. A metal fan is not allowed to say it is a joke. Because it isn't. But also because we'd get kicked out of the guild.

GD: Is this more or less metal than the Sammy Hagar song that was the theme to the movie Over The Top? Because I think there's just no way for White Wizzard to compare with this.

het: Yeah, you've got me there.

GD: They really should have had the wizards arm-wrestle. 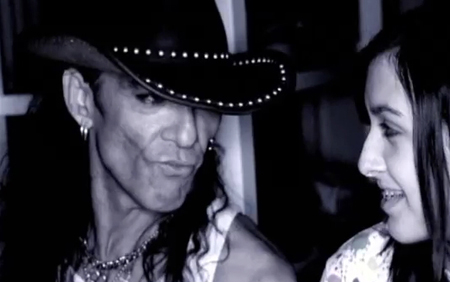 het: That kid's thinking "I'm gonna upload this video of the guy my mom says is my real dad!"

GD: Thinking about Ratt videos made me look up when Milton Berle died. 2002, huh. Then I looked up when Stephen Pearcy died.

GD: She had a full head of hair when she started climbing.

het: My video keeps stopping, so tell me what happens next. Does she reach the top? Does she crumble to dust?

GD: Well, she starts walking down the stairs, then there's a brief one-second flash of an attractive woman! Then she, like, becomes the Misfits logo.

het: I'm just imagining this girl visiting her grandma: "You should let your hair grow out, you look so pretty! Get some color into those cheeks, a little roue never hurt anyone!" "Grandmaaaa, this is just how kids dress nowadays!"

het: She's right, Twitter is pretty false. Communication shouldn't be done from a QWERTY keyboard on a smartphone, it should be via a ram's horn blown from the highest peak in the region.

GD: Is that Raiden over there in the corner? Oh ...

het: They posted an ad on Craigslist: LOOKING FOR LEAD SINGER, MUST HAVE QUIT STRIPPING 15 YEARS AGO.

GD: I really hope this is a collaboration between some guitarist named Starr and '80s singer Kim Wilde.

het: She has a deeper voice than literally every single one of those men.

GD: Yeah, I don't think that worked out for her. "Are you a GOD? Then, die!" *gargoyle statues come to life, start flying around.*