Stuff You Will Hate VII: Too Cool for School!

There has been some talk lately about this column coming from a "too cool for school" perspective. I'd like to clear up this erroneous characterization. First of all, the reason Sgt. D and I don't attend school has nothing to do with our self-perceived hipness and everything to do with the fact that we're old as fuck. Secondly, despite spending most of our formative music-listening years immersed in the metal and hardcore scenes, we both boast an unabashed appreciation of popular music and other fruity pursuits. As evidence, I present this recent sensitive-side exchange:

But life isn't all rainbow hearts and candies with surprise centers. Because we are so musically accepting, we must scour obscure clips from the Internet's dregs in order to compile this monthly collection of terrible videos. We hate them not because they're popular (also, they're not) but because they're offensive even to our all-welcoming ears. 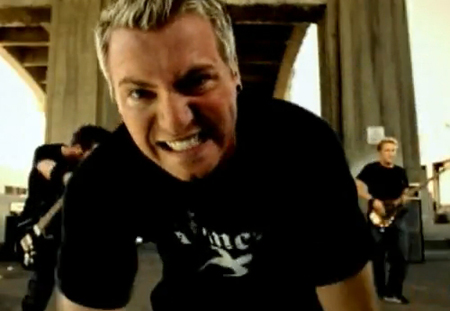 Much like Pax217 is the Christian 311 and Impending Doom is Suicide Silence for kids who fear they'll go to hell if they shop at Hot Topic, Thousand Foot Krutch is like Crazy Town, if they were fronted by a corny youth pastor instead of professional trainwreck Shifty Shellshock. With watered-down Rage Against The Machine riffs and bland lyrics like "Throw up your rawkfist if you're feelin' it when I drop this," even the most uptight parents will nod with approval.

I can imagine the singer trying to "save" some troubled teens who are living a life of sin, smoking cigarettes and skateboarding behind the 7-11 after school one day. "What's up, y'all? You guys are doing some really cool moves on your rollerboards," he says in an effort to establish a rapport with the teens based on a mutual love of skateboarding. Sensing that gambit might have failed, he tries a different tack. "School is so lame, am I right?? Man, I wish I was on pot right now!" he adds, so they don't think he's a narc. "Hey, did I tell you about my best friend? He's not here right now, but you might like him. He's got long hair and some wild ideas, but I'll introduce you to him on Sunday-- his name is Jesus Christ, and he has a rawkfist like none the world has ever known." -- Sgt. D 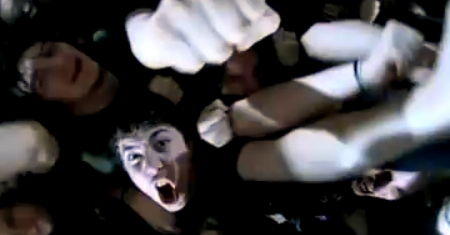 There's something weird about a band who would name itself after the fragile and delicate ectomorph physique, noted for having light bones, small joints, and slight muscles. If you guessed that only Euros could be so clueless as to choose such a dumb name, congratulations. Ektomorf is Germany's answer to crappy '90s "groove metal," along the lines of Pro-Pain, Independent-era Sacred Reich or the Korn-ified Sepultura albums. You can always count on Euros to be a few steps behind the pack -- I wonder if they've heard that hot new band Machine Head??

This song is called "Show Your Fist," and in this clip a bunch of Euros in Ozzfest gear gather in what appears to be a vacant office (complete with acoustic tile drop-ceiling) to headbang, push-mosh and, well, show their fists. They don't punch stuff or pump their fists in the air aggressively and rhythmically, they just kind of display them for the camera. They might be dumbfoundingly literal when it comes to video treatments, but I have to hand it to these Germans: They've got the '90s groove-metal steez down pat. Clearly Ektomorf studied genre classics like the video for Biohazard's "Punishment." The drummer is wearing a beanie (he probably heard from some American tourists that it looks tough), and the guitarist is even playing a camo SG! Bravo, sir -- that's the kind of attention to detail that wins you lots of points in my book. The only detail he's missing is wearing a backpack onstage, a la Soulfly. -- Sgt. D 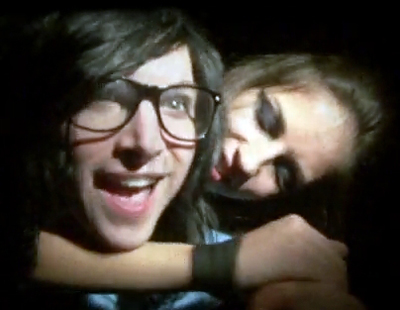 Either somebody already told JJ Demon that he killed hip hop, and that insult served as the catalyst for this song, or he wrote it as a preliminary strike against the likely response. Really, though, what JJ Demon (that fucking name) does has nothing to do with hip hop. "It's not rapping, it's songwriting," his handlers clarify, a haughty position to take regarding someone best known for a song-length whine about someone sending his calls to voice mail. While the claim that "his flow and syllable placement are unmatched even by the most gifted rappers" is fucking ludicrous, JJ Demon is competent, in that his lines rhyme and they're on-beat. Lyrically, though, it's the usual blend of polysyllabic nonsense (Mesopotamia/audio/Saudi Arabian automatic) and embarrassing commentary (you love hustlin' so much/why don't you marry it?) paraded by most technically decent yet clearly just-not-fucking-getting-it white MCs. However, instead of the standard facial-hair-and-hooded-sweatshirt uniform, he looks like a slightly younger Weird Al. At least in this video. In his million MySpace pictures, he just resembles a typical scene clown.

Speaking of clowns, I interviewed Insane Clown Posse more than a decade ago, and this is what Violent J told me: "What we do is controversial, evil and ruthless, but it's completely hidden. Our videos are horrible, but you don't have to see them on MTV. Our songs might be violent, but you won't hear them on the radio. You gotta go buy them to hear them. And at our concerts, we spray Faygo, get violent, mosh, slam-dance, throw shit off the stage, but we don't open for anybody... We don't want to make anybody sit through us that doesn't want to." They've stuck with that program, and I applaud them for self-quarantining. I appreciate the likes of JJ Demon doing the same. Having a fan base that consists entirely of "tweens who still post comments on MySpace for some reason" gives them everything they need, from Internet "celebrity" to a fuckload of groupies. When he raps "all the scene girls are starting to acknowledge me," you can tell this, not the allegedly provocative act of "killing hip hop," is JJ Demon's proudest accomplishment.

It's inherently hard to take something that describes itself as "scene-hop" seriously, but "I Killed Hip Hop" seems like it's JJ Demon's "serious" song, at least when compared to his other tracks ("Bubble Gum," "Coolest. Girl. Ever.") Or maybe it's a parody of state-of-the-genre manifestos issued by uncultured outsiders. (This seems far too ambitious for JJ Demon, but the video includes someone stabbing a happy-face balloon, so I certainly hope it's a fucking joke.) Regardless, it's easier to listen to than most of the stuff Sgt. D sends me, but it's also an "artistic statement" from a dude whose idea of clever is biting his lip while wearing a shirt that says "Bite Your Lip." OK, I just found an interview where he says this: "I think that I just kind of make rap cool again for lack of better words." LOL, fuck this guy. -- GD