Hail The Villain, "Take Back The Fear" 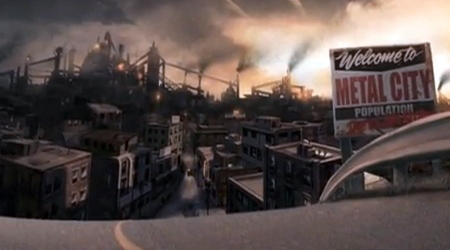 het: I like the guy who's like "hmm, I want a cup of coffee. Guess I'll drive to Metal City!"

GD: A guy with a Mohawk and his buddies are hassling people -- Puncture is going wild in the diner!

het: I like when the band is only the background in a video, like "this all just happened to take place at a Hail the Villain concert."

GD: This is like an AMV put together by someone with terrible musical taste.

het: And a terrible frame rate.

het: Question: Is this espousing the opposite of the Killwhitneydead-style misogyny, or is this the precursor to it? I mean, on the one hand, the guy cheated on his wife and got his comeuppance. But on the other hand, she was an evil metal chick who deceived him and ripped him off.

GD: He's a conflict-averse married guy whose girlfriend just found out she's pregnant, he should probably be glad he's dead. I guess we could find all the answers we'd need by going to www.hailthevillain.com like it says, but, eh.

Wizard, "Warriors of the Night"

GD: Aren't these more like "Warriors During the Day"?

het: I think they're "Warriors of the Night (on a Budget)."

het: OK, so the dude lurking in a robe, is that a wizard? Is he going to cast "Remove Virginity" and they'll just drop the weapons and take off their garb?

GD: The video will go to fuzz after that spell, and then they'll roll four minutes of credits.

GD: I hope there is a child in this forest somewhere watching this and laughing at them.

het: Nah, it's Norway, everyone does this.

GD: Do you think bands in Norway need to file official requests for forest space so they're not all filming at the same time? Like reserving gazebos at the park?

het: Can you imagine what would happen if a power-metal band and a black-metal band were filming at the same time in the same forest? Ugly stuff, man.

GD: The power-metal band has real weapons, but the black-metal band might empty a bowl of maggots in their face.

het: Plus the guys in the black-metal band have spikes all over them. Basically black metal is +2 defense.

GD: There was a tree with nails in it, and he approached it threateningly, wielding a stick with nails in it. But really it was a tender moment, "this is where you came from, son."

het: If you love something, set it free.

GD: Running in snow while wearing a cape must be challenging.

het: This camerawork says less "grim and frostbitten" and more "I'm vlogging this." Writing their names in blood in the snow is pretty cool, though.

GD: They should have just cut it down to that part and had this be a 90-second "Get to Know Vobiscum" promo. These guys used to be called "Dunkelreich," probably a good name change.

het: I know it probably means like "Dark Kingdom," but all I can think of when I hear it is "Dunkeroos."

GD: I would expect "Dunkelreich" to get tripped in the black-metal cafeteria. "Oh, no! They've made me spill my bowl, my maggots are everywhere!"