You can read more of "Jason" Turd Ferguson's writing at Notable Noise. Would you like truffle fries with that? 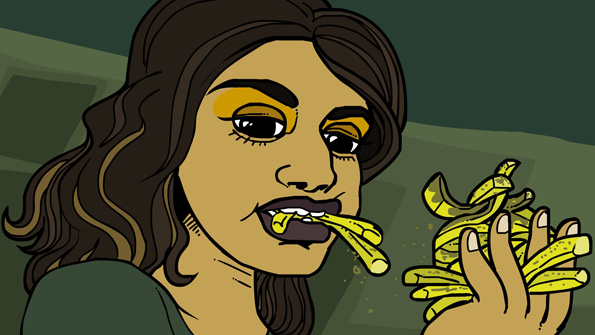 Like everyone else (meaning everyone else that ever gave a crap about M.I.A.), I was fascinated by the New York Times interview with M.I.A. that, decontextualized or not, painted a picture of a intellectually immature rich kid who desperately needed to reconfirm to herself and those who paid attention to her that she is, in fact, a bomb-throwing revolutionary who has tapped into a future-forward musical and political mindstream.

But those truffle fries she nibbled at ... well, that pretty much did the whole myth in, didn't it? Whether the article's writer ordered them or Maya herself did is irrelevant; the mere presence of truffle fries (which, for the record, are fucking awesome) on the table immediately forced readers to attune their perceptions of the artist being interviewed. The image that M.I.A. has so carefully cultivated for herself is that of an on-the-ground rabble-rouser with a taste for pan-global, next-gen beats and a pixelated-neon visual pallet.

And this image has gained her considerable attention. I should know, I was a breathlessly vocal champion for her ever since I heard Piracy Funds Terrorism, and was utterly floored by the blast of capital-N newness that was Arular. Even the comparatively less-thrilling Kala was redeemed by a sense of fun (I'm looking at you "Jimmy") that was fastened tightly to her hard-hitting, global pastiche-pop. On MAYA, M.I.A.'s third album, the newness is gone (replaced with leftover tracks from early-'90s industrial music), the fun has been drained (seriously, for all its failures, its greatest is that it's boring), and as for the political implications ... well, if those truffle fries didn't remind you that "daughter of the revolution" Maya Arulpragasam is now "Brentwood wife" Maya Arulpragasam-Bronfman, allow me to remind you now.

Nothing against true love (or marrying rich), but there's a whole lot to legitimately take away from M.I.A.'s wedding to a multi-bajilliionaire. Any hunger that this kid once had for justice or innovation (the two tentpoles in the M.I.A. mythology) will have been necessarily dampened by a gated driveway and a housekeeping staff. Revolutionaries are never those with money or power, and now Maya Arulpragasam has both. And MAYA reeks of self-satisfaction.

Whereas before M.I.A. seemed to be an artist straining to reconcile a multitude of influences - cultural, political, musical - into her art, now she's wedding Suicide samples to lifeless and meandering songs with grade-school messages of "freedom." Were the music on MAYA interesting - or, at the very least, invigorating - much of this would be excusable, but instead, it's amplifying the worst possible expectations about her, revealing a creative bankruptcy buried under a pile of glossy fashion spreads and dull-witted sloganeering.

I'm not alone in my feelings about both M.I.A. and MAYA. This former critic's darling is nursing a lowly 69 for MAYA on Metacritic, a lower score than - I swear to God - the new Stone Temple Pilots album. Even Diplo called the album a turd ... and he produced three of the tracks on it. She's officially crossed the Rubicon into self-parody, garnering considerable extra-musical criticism. But worse, she's committed the gravest of musical sins: Earning the trust of the art world as an innovator and ground-breaker, only to reveal herself as a charlatan incapable of doing anything interesting (or even memorable) with what basically amounts to carte blanche. Fans and critics (and those, like me, who are both) were honestly anticipating the arrival of MAYA, legitimately curious about how M.I.A. would continue the streak of innovation that seemed so unstoppable on Kala and Arular. We have been honestly disappointed. Perhaps not surprised, but definitely disappointed.

As MAYA proves, M.I.A. has become an artist who's more devoted to presentation and presence than actual art. (Or, maybe, she always was.) From her hissy fit over that NYT article to a daft Letterman appearance where she showed up with a clutch of doppelgangers to an undending stream of illiterate and inchoate Twitter posts (summary: "LOOK AT ME AND MY TINFOIL HAT"), M.I.A. is no longer about music, she's about branding. She's not Prince crossed with the Clash; she's LeBron James crossed with Lady Gaga.

Thanks to Shmorky for the glorious illustrations! You can reach Jason at Notable Noise, or at the e-mail address below, or by calling him when M.I.A. inevitably tracks down and publicizes his phone number within the next week!