From a little after two o'clock until almost sundown I observed the tangled wigsman unbridled walk among the sloughing hillside needle brush of Yumneawtup, Mississippi, the dander sunlight caught across the upright follicles of pine, until it was that Missy Chuntwit came down from the clap and tar lodge I built myself the day before and, with caroming harlot's cry, shook the pigeons and startled the mossy oaf to crash away and pillage other lands and trod upon them with his bootless paws a league across. This occasion was not coincidental, excepting the calamitous arrival of Miss Chuntwit, for which there was no preparation nor suitable excuse, for I have practiced the pursuit of folklore both American and older, which centers upon the legends of beasts, often imagined, but sometimes all too real.

Harold Lee Tobago sat upon a fresh cut stump some thirty years prior. He made camp by a silver meander fed from a spring higher up, between the foggy foothill humps, intent on feeding himself and his with the string meat of squirrels and, if chance or God designed, to feast upon a raccoon or larger. It was a day like many before it for Harold Lee and many more would be to come if not for the interruption of a shape the young man's account likened to a promontory which stepped out from the primeval wood and formed itself, though imperfectly, into the shape of a man.

Vincent Cardinal wore a blue suit and frowns that decorated his face with bristle brush scalp neat and clipped by a man in a coat in a city to which no good man has ever gone. He introduced himself with a card and a handshake and a poacher's eye that once put upon Mr. Tobago disinclined him to speak more on the subject of large feet or wooly reaches. Mr. Cardinal would not accept any account regardless and was likely to have a tin placard upon a desk in some half-lidded lair of regrets and contempt for honesty endorsed and underwritten by skeptical witnesses to the gradual revelation of the sublime.

Mr. Tobago proved more willing to divulge truth to kinder ears, of which I personally leant my own and let it be filled with the tale so quickly dismissed by men who own helicopter planes and Harvard papers and are, in all ways, men who have forgotten that truth does not design itself with a particular purpose nor intend mischief. Truth is perfect and imperfect are those who must bear its weight.

Some years later I would reflect upon my encounter with bigfoot in the manner of a beaten general recalling the disposition of his force with waking clarity, the weight of men upon his conscience, revisions of defilade and reinforcements never truly found becoming cold sweats upon his body in the night. Each of us wonders if chance beget a finer path now since overgrown with thistle that might have stretched beneath our heels and brought us to a place of contentment that has always eluded us, a place where Missy Chuntwit did not cry out and I recalled my camera phone, which lay upon the map table beside a steaming sip of coffee.

My assurances of truth cannot yet reach back past the sonnet time, that awful poet, has already recited and force my hand to lift up the black glass upon the table and conjure truth, indelible and exquisite in its color, upon the fabric of that moment. I did remember, after all but perhaps too late, for the image is rather blurry, but you can still totally make him out. 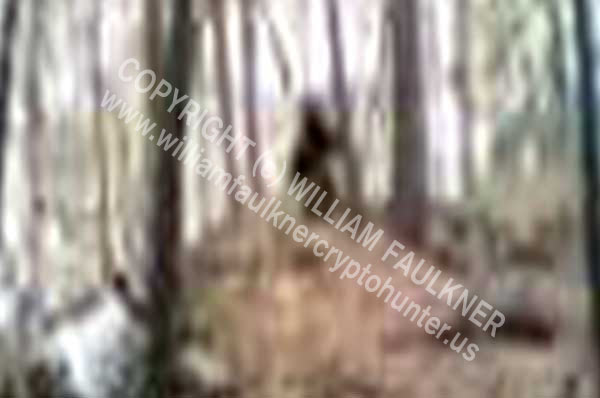