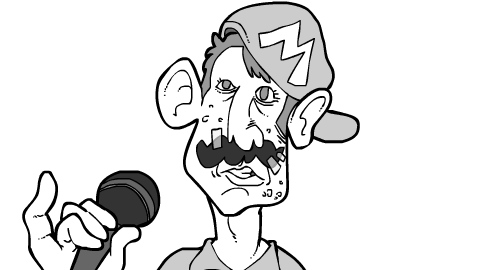 These nerd-centric bands don't aim to expand the boundaries of music, or even to do something that's already been done and do it particularly well. They work only to expand the boundaries of nerd culture, and they cheapen music by watering it down until it caters to a specific demographic without challenging it and without really even forcing anyone to listen. This music isn't made to be consumed by itself, it becomes a signifier for other things. And while some genres, folk and punk most notably, have been known to have motives that aren't entirely musical (often political), they at the very least recognize the power of music to move people, to spur someone into action.

This shit doesn't spur anyone, it softens them. It reminds them of something familiar and lets them wander through the world of music wearing blinders. On the one hand, this is actually close to being something pretty great: The thematic connection could open fans up to new genres more easily, connecting bluegrass with metal with jazz. On the other, the emphasis on thematic connection over musical connection means that these musical aspects are too often ignored (and the music itself is too often bland rock/pop, or ska). Fans are being less immersed in the music and more immersed in the nostalgia. It's bringing music into peoples' lives without bringing people to music.

The fact that this kind of thing is easy to do and profitable ensures more and more artists are doing it, creating the illusion of options for fans who want to explore only within the "nerd" realm. So instead of wandering off into the vast expanses of non-lifestyle music, fans of these bands can stay where they're comfortable, like little kids, riding on 8-bit training wheels, so proud they can bike all the way to the shady part of the suburb, where they play the nerdcore.

Shmorky did these illustrations. As a gesture of thanks, I'm going to put some flowers on his grave right now.