Stuff You Will Hate X

Sgt. D and I usually kick off every month with Stuff You Will Hate, but this time we were running a little behind schedule. So, a larger than usual amount of gunk accumulated in our crap filter. But despite the extra time, we didn't have any extra energy to write about them, especially after surviving the fucking Pacifist video. So for those of you who just can't get enough shittiness, here are some horrible leftovers: A scenester rapper who looks like half MC Serch, half Mickey Mouse, and some Dick Tracy-movie-looking Italian band who figured the best way to pay homage to a song about an ostracized gay teen would be to film dudes hanging on a couch next to geishas. Everyone else, please proceed directly to the lovely image beneath this box! 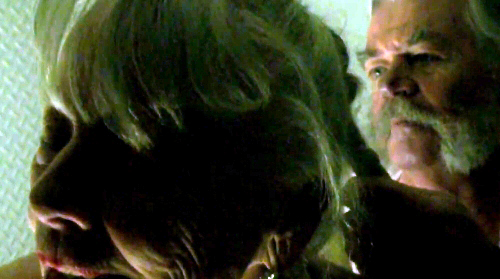 People will probably hate this video because it contains relatively graphic footage of elderly people getting it on. For some reason, everyone cheers when some carbon-dated couple starts making out on the "Kiss Cam" at sporting events, but no one wants to see the same olds fucking in a strip-club bathroom. Fine. I, however, give Raunchy credit for making one of the few videos featured in this section that left me with questions other than "what the fuck is wrong with these people?"

For example, how did they put this cast together? Perhaps they held auditions, and the actors thought "well, this sounds a bit sleazy, but there are just so few good roles for octogenarians in music videos!" Or maybe they enlisted relatives, leading to creepy directions such as "Now, Jeppe's grandpa, you just lost your chance with Jesper's grandma in a roll of the dice, and you're feeling really down about it. And Jesper's grandpa -- God, I keep forgetting there are two of you, Jesper Tilsted's grandpa -- you're going to enter Jesper Kvist's grandma from behind."

Anyway, Raunchy, if you crazy Danes are reading this, please answer these casting questions, and also I'd love to ask the stars of "Warriors" a few others, such as "what do you think of Raunchy's music (if you've actually listened to it)?" and "are you still alive?" Please send your responses to the e-mail address at the end of this column! -GD 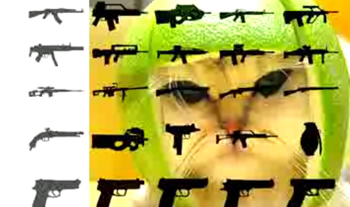 Broken Social Scene, "Meet Me in the Basement"

This video was made by a fan, but it's "officially endorsed" by the band. It must be cool to have "fans," but I have to imagine it gets awkward when your fans present you with crap like this that they've obviously squandered countless hours on creating. And for every hot groupie who sends you n00dz, you have to put your arm around 10 fatties while sporting a shit-eating grin on your face to convince them you are happy to do it-- after all, fat girls have money too. But I am an artist and I make compromises for nobody, so if I were in a band, I would tell any fatty who wanted her picture taken with me to get the fuck out. After all, we are making art here, not running a charity.

In any case, this video is "in reponse to" the G20 meeting in Toronto. Not sure if anybody is actually listening, but at least they can pat themselves on the back for "raising awareness." I was bummed, because I thought it was going to be about one of my favorite cars, the Infiniti G20, but apparently it's some boring thing that has to do with government. The video reminds me of when I lived in Seattle during the 2000 WTO riots: Crowds of hippies, punks, and other deluded, irritating, idealists using the event as a flimsy excuse to get back at their rich, professional parents who don't love them by committing petty vandalism and chanting empty slogans, while the grown-ups watch on television with equal parts disappointment and amusement. --Sgt. D 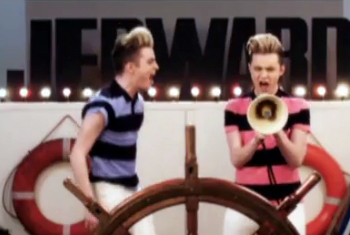 Do you know any places where sailors hang out around here?

Jedward, "All The Small Things"

In an effort to endear herself to a music-bashing boyfriend, someone I was dating sent me an unsolicited "Songs I Hate" list. It contained some truly loathsome tunes, such as CCR's inbred thigh-slapper "Down on the Corner" and Barenaked Ladies' babbling quirkfest "One Week." And then there was Blink-182's "All The Small Things," which doesn't really bother me too much. The trouble with actually hating music, as opposed to just pretending to do so on the Internet, is that there's always something similar to yet much, much worse than the band on which you're wasting an intense emotion.

Like, take the things someone might potentially dislike about Blink's "All The Small Things" -- cutesy "na-na" chorus; a video that's a coy, self-impressed showcase for the band members' attractiveness masquerading as a parody of boy-band tropes; that forced "commiserating" rhyme -- and then consider Jedward's version -- cutesy twin choreography; a video that pairs clumsily executed Ziggy Stardust and Clockwork Orange references with slapfights and actual boy-band tropes; a goofy hand-jive gesture to accompany "commiserating." I'd give you my ex-girlfriend's response to this rendition, but I'm pretty sure she permanently severed communication after I sent her this link.

Jedward earned a nomination for "Funniest Double Act" at the Loaded Laftas Award (Thanks, Wikipedia), so I guess any humor value to be derived from the group's dance moves and flat harmonizing is intentional? Jedward already made a bit of a stir with the laughing-at-dumb-things-on-the-Internet crowd with its Vanilla Ice collaboration. I guess the real comedy might arrive when the duo starts writing and performing its own material, revealing the ridiculous ideas swirling beneath those puffy quiffs, but as YouTube commenter and typical 8-year-old Jedward fan "Dolphinz5" explains, "they sing peoples other songs coz they r 'starters' in the world of fame." Well put, Dolphinz5. Well put. --GD 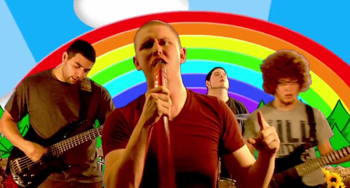 There are at least a hundred things wrong with this fucking video.Pacifist, "Happiness"

Clearly post-DEP technical grindcore is the new ska. Back in the '90s, ska became popular because it provided an avenue for unattractive outcasts, girls with flabby arms, and band geeks who cursed themselves for playing the trombone instead of the guitar to be in something close to a rock band. These days, the same losers fill the ranks of bands like Pacifist. Instead of writing Bosstones-style "clean-verse-then-turn-on-the-distortion-for-the-chorus" skacore anthems, these bands opt for the only thing more tediously formulaic: a seemingly arbitrary collage of weedly-weedly bits and predictable "jazzy" interludes interspersed with passionless, cookie-cutter breakdowns.

In this video, a series of children's show characters commit acts of violence and make off-color jokes about feces and urine. A friend of mine likes to call this sort of thing "Web designer humor," because it's the kind of Adult Swim fodder that seems to appeal to overweight, socially awkward nerds who wear baggy Old Navy jeans and a hoodie 365 days a year and sit in front of a computer all day. Granted, the local strippers/waitresses Pacifist cajoled into playing the "sexy redneck girls" are very bangable, but they're hardly enough to offset the afro-coiffed guitarist, or the fat kid who plays bass like he's furiously jacking to anime snuff porn.

After watching this video several times, I am left with two thoughts: 1. It's a shame that technology has democratized media such that people like this have a voice 2. Would Mike Patton have the dignity to throw himself on a sword for opening the door to this and other "wacky" bullshit via Mr. Bungle? -Sgt. D