A recent Los Angeles Times article suggests that I, as a humble Midwesterner, should be the sort of Joe Sixpack who savors star-spangled butt-rock groups. Perhaps I'm just confused about my musical loyalties because my state, Missouri, remains undecided, long after everyone stopped giving a fuck. Regardless, I've acquired copies of the new Nickelback and Hinder albums, and I've decided to embrace my "flyover" sensibilities by focusing only on the positive aspects of thesepreposterous shitpilespopulist masterpieces. 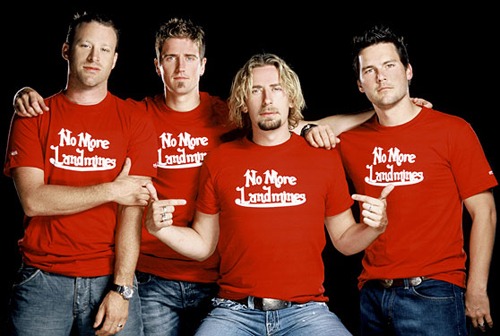 "Something in Your Mouth"
Nickelback opens Dark Horse with the line "got to meet the hottie with the million-dollar body," which prompted immediate laughter. Comic relief is a necessity in the Midwest when you're toiling at a grim task, like working long hours at a soon-to-be-eliminated factory job, or listening to an entire Nickelback record. Chad Kroeger's lyrical advocacy ("you look so much cuter with something in your mouth") means adult female thumbsuckers, previously categorized as retarded losers, might enjoy brief popularity, at least at strip clubs and redneck bars.

"Burn It to the Ground"
This song dilutes the main riff from Pantera's "Walk," like a weak stream of piss splattering Dimebag's grave. At least that's what I thought at first. Then I realized this appropriation might be another poignant tribute, and that Nickelback thinks it's being "heavy," which is adorable in a pathetic sort of way. The line "We got no class, no taste, no shirt and shit-faced" speaks to my primal Midwestern urge to parade topless through town while smearing livestock feces on my forehead.

"Gotta Be Somebody"
Kroeger's message ("everybody wants to know they're not alone") could really resonate with Midwestern youth. For example, a bright rural lad feels alienated from his pals, who devour Nickelback's sappy slow songs like the full bottle of maple syrup they drink with every morning helping of flapjacks. But if he rants on the Internet about how much "Gotta Be Somebody" sucks, another ostracized rube might express his camaraderie, and then another, until a substantial red-state resistance forms entirely on the platform of Nickelback disavowal. 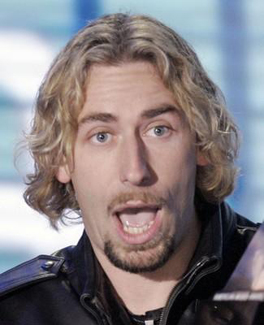 Guess what *I* can do?"Next Go Round"
Kroeger proposes having sex while "hanging upside down." He also wants to wrestle in a Jell-O-filled tub for hours "without ever coming up." Of course, it's nauseating to imagine this pube-headed Neanderthal fucking anyone under any circumstances, but on the plus side, his halfwit fans might attempt these bizarre practices, leading to hilarious injuries and deaths: "Ribald Oklahoma couple encased in gelatin tomb like common fruit."

"Just to Get High"
"He was my best friend," croaks Kroeger in earnest-hick mode, but, alas, the drug-addled pal "pulled a knife on someone's wife" and committed some other conveniently rhyming crimes. This song could definitely help parents deal with their delinquent progeny, provided they push stop after it ends to prevent the kids from hearing about the never-ending bong party that starts a few tracks later. Some teens might be scared straight, fearful that a squiggle-maned troglodyte might mark their fatal overdoses with an embarrassing power ballad. 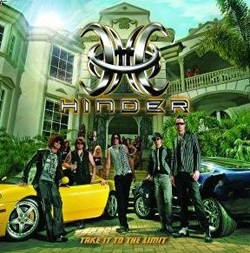 "Use Me"
Bill Withers wrote a great soul song called "Use Me," to which this bullshit ("Makes me feel kinda sleazy/It's kinda cool because she already pleased me") bears no resemblance. This record contains other famously named songs ("Take It to the Limit," "Without You"), all of which are terrible originals. Hinder considerately forges its own hideous legacy without dragging other groups through the oozing slime in which it wallows.

"Up All Night"
"I'll let you know when the sexy dirty deed is done," leers scuzzy Hinder crooner Austin Winkler. Mercifully, this promised elaboration never materializes, because this is actually the last line of the song. Much as Hinder released multiple copies of its album artwork, some of which were pornographic, the group could eventually issue a remix featuring additional lascivious verses. This pay-per-view model keeps normal people from projectile vomiting upon accidental contact with Hinder's most appalling imagery. Still, I wish I could just shell out a few bucks and have the base-model album artwork and lyrical content erased from my memory.

"Take It to the Limit"
Mick Mars appears on this track, though given that he's been a Weekend at Bernie's corpse on Motley Crue's stage for years, it's hard to imagine him taking much of an active role in shaping this song. It's fortunate that Hinder didn't recruit a guest star that might have put a distinctive stamp on this tune, a songwriter who could out-gross lines like "there'd be nothing better than riding her forever." Say, someone like Chad fucking Kroeger.

"The Best Is Yet to Come"
"My first make-out session/I learned my first lesson/While trying to get to the next base," Winkler sings. "When I slipped passed (sic) her waist, she smacked my hand away/then I got a slap in the face." This might not seem like an evocative reminiscence, and the got-so-drunk-I-puked story might not move you either, but that's just because you can't hear the fucking "Time of Your Life" strings swelling behind his voice. Hinder deserves a little credit for swiping the phrase "make out" from emo dudes and placing it in a marginally less faggy context.

Strangely, the song "Loaded and Alone" has nothing to do with these douches drinking by themselves. 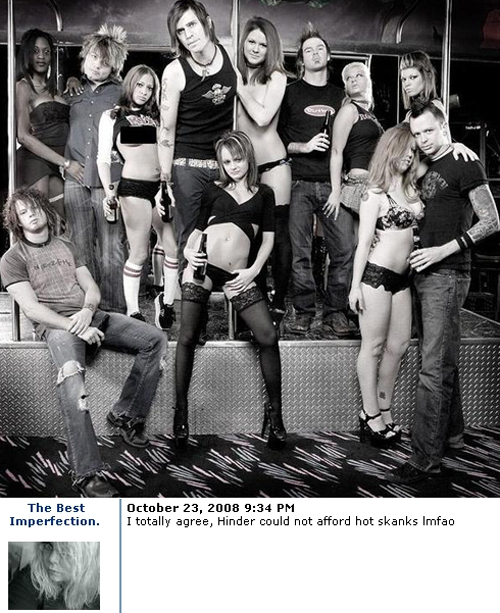