As always, there's a huge amount of hypocrisy when you look at the way these rock fans consider the same situation tailored to different demographics. For guys who pledge allegiance to "sex, drugs, and rock & roll," they seem all too eager to reject "unintelligent" hip-hop, i.e. hip-hop about "guns, bitches, and bling," which is practically the same thing (exactly the same thing, if you ask Ted Nugent). Because, of course, when something happens in rock music, it's the manifestation of the natural raw sexuality of the music. When it happens in hip-hop, it's indicative of the backwards, sub-human "thug culture" the music promotes. Never mind that, in both cases, they're mostly larger-than-life personae adopted to add some thrill to the music. Those black dudes are just violent woman-haters.

Speaking of, things get even worse when you throw women into the mix. Women who don't put their sexuality on display have it hoisted on them anyway - female rock artists are judged more on their attractiveness than on their musical ability, trotted out as "stage presence," using great phrases like "smoldering sexuality." And if they're unattractive, be goddamn sure that'll be mentioned right alongside their musical ability (or lack thereof) - either as a reinforcement of how terrible they are, or, if they're good, as some sort of obstacle to overcome, like only attractive women should be able to shred. If they do make a show out of their sexuality, they're quickly labeled sluts, and we call into question whether they should even be allowed out in public - think of the poor, impressionable children! The conclusion is easy to reach: The gender dynamic in rock music isn't about sex, it's about power. Rock fans are threatened when a woman takes control of her own sexuality, but when they can project sexuality on a woman in rock, when they can control who she is as a sexual person, holy shit, man. Boner city.

And really, that's what being a Rock Star is all about at its core - power. And not just over sexuality - it's also about the power to move an entire crowd, to get thousands of people singing and clapping along to your song. So maybe it shouldn't be surprising how it plays out when we look at sexual attitudes side-by-side with rock music. Maybe it's a package deal. Then again, maybe if rock journalism stops catering to a demographic of fifteen-year-old virgins who think KISS rocks at least partly cuz they think ladies definitely love Gene Simmons' gross-ass tongue, it can begin to move forward a little. 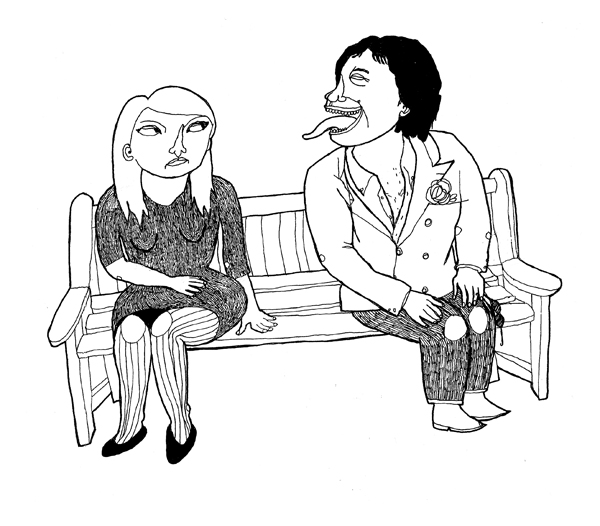 Thanks to Ali "Decadent Rock Stars Have No Place in Black Metal, Death to Falses" Horn for the illustrations!