The Boy Who Cried Wolfmother 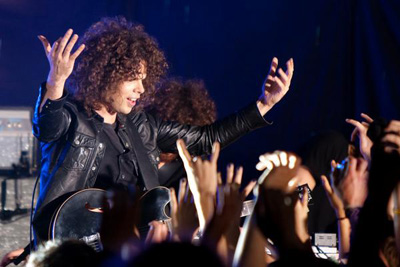 Who are you 'Wolfies,' and what the fuck is wrong with you?

For a tantalizing moment last summer, it seemed as though Wolfmother's second album might never happen. The group lost two of its three members, but unfortunately the one left was toxic caterwauler Andrew Stockdale. This is like cutting off the moldy portions of an orange while leaving the part that had been dipped in flesh-eating poison.

On their own, Stockdale's vocals might not be any worse than the battle-yodels uncorked by the eunuch sorcerers of The Mars Volta and Coheed and Cambria, but at least those groups provide a lot of baroque instrumental distraction. With Wolfmother, it's always just a basic riff that gets completely overwhelmed by his megaphone whine. The effect becomes deadly with extended exposure, as if his squeal were emitting X-rays.

Cosmic Egg contains a cowbell-funk song called "White Feather," which contains the line "I can't compete with your dancing feet." It cycles through aimless wankery, psychedelic-prom power ballads, lyrics about "the mystic haze" and "the kingdoms of the sun" -- all wrapped in a strangulation-tight bow by Stockdale's squished-dwarf yowl. It's the sort of album that would have been rightfully ignored thirty years ago, when people still clamored for this kind of crap.

Today, it's aggressively superfluous. Making "new classic rock" is like manufacturing fresh Atari cartridges. Classic-rock radio isn't accepting new submissions from the dad-rock groups that are still recording, let alone from some newly minted simulacra that remains stubbornly uninformed by decades of musical innovation. Satisfying your classic-rock cravings by listening to Wolfmother is like addressing your hunger by chewing on a picture of a steak.