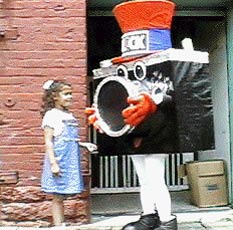 This is likely a magician and chances are that unsuspecting little girl will soon be the victim of a horrible scam.I have long suspected magicians are behind much of the world's problems these days. I'm not afraid to admit it even though I know it may cause you to lump my opinions in the same pile as those people who think that aliens caused them to become furries or that a sasquatch is secretly pulling the strings at the Whitehouse. Magicians throughout history have been up to no good, from curses and hexes, to all manner of potions, scrolls, and wands. They play us for fools and consort with dark powers. David Copperfield even made the Statue of Liberty disappear and if that's not a commie scheme I don't know what is. You may ask in that slightly annoying nasal-voice I always imagine "So Zack, why your sudden interest in the machinations of the magician underground?" That interest has always been there, but it was recently reawakened by an AP article from Iran.

Iranian police are looking for a phony sorcerer who conned a man into believing he was invisible and could rob banks, the Jam-e Jam newspaper said Thursday. Customers at a Tehran bank quickly overpowered the deluded robber after he started snatching banknotes from their hands.

Ignoring the raptastic name of Iran's newspapers, this is exactly the sort of deviltry that I'm referring to! That sorcerer conned that poor guy into thinking he could turn invisible and rob banks, probably by showing him his own powers to disappear from view. Magicians are not interested in helping out a needy bank robber though, and once he scammed the guy out of some quick cash he left him dangling in the breeze for authorities to come collect. You want to talk about scam-artists, magicians make the entire cast of the "The Grifters" look like Abraham Lincoln trading beaver pelts to Jesus. No, I don't know why Jesus needs beaver pelts, but you can bet it does not involve ensorcelling or potions.

You might be so confident in your western ways that you believe that sorcerers and magicians no longer present a threat to the free world. That's fine until you suddenly end up unable to get into your office because it has been made invisible by a cell of wizards. That's just great until you wake up one morning and all of the cars on the block have been transformed into giant talking cats with glowing red eyes. Wake the hell up America! This magician menace is not going to go away without the constant vigilance of the citizens, and possibly the help of the office of Homeland Security. Working in conjunction with the FBI and CIA I have pieced together profiles on the world's five most dangerous magicians.

These rogues come from all different ethnic backgrounds but are united by one goal; the domination of wizardry over the capitalist Christian societies. Get you crosses, shotguns, shotguns that shoot crosses, and I guess if you're Jewish shotgun launch-able versions of those stars you guys have. To add extra excitement to this wanted list I will be counting down from five like it's some "greatest videos featuring gyrating asses of all time" countdown on MTV.

Number Five Most Wanted Magician: Memnos the DestroyerProfile: Once a simple sales clerk at CompUSA, Memnos made contact with the dark powers of the netherworld through unknown means and was granted a spellbook from the Ninth Circle of Hell. He is known to wander throughout the Mid-Western and Plains states in search of his ex-girlfriend Rhonda Spears who he believes to be "shacking up with that guy from Best Buy".

Powers: Can make pigeons fly to a random location instead of returning to roost, is able to read upside down, claims to be able to fly although a fall from an escalator at the American Mall in Minnesota casts some doubt on this ability, and can grant wishes as long as they involve receiving money in less than the sum of thirty dollars.

Wanted For: Plotting to fix a game of Hollywood Squares by causing pigeons to fly into Whoopie Goldberg's open mouth. Memnos is known to carry a "scepter of the lich lord" made out of a foam skull duct-taped to two dowel rods, so consider him armed and dangerous.

Profile: Born Jacob Ecksley, Lucretia underwent a magical treatment in Sweden one summer and returned to her job as an account for Walgreens as a woman. Her professional life quickly fell apart as she was unable to control the powerful "majicks" coursing through her veins. She briefly lead an occult sept from the basement of a new age shop in Champaign, Illinois called "Crazy Earl's Bargain Mantras". Police broke up the sept in late 1998 and Lucretia has not been directly seen sense.

Powers: Has the power to seduce men who have nearly passed out from drinking whiskey shots, can meditate really good, smokes two plus packs a day of unfiltered camel cigarettes yet is only ever seen in public smoking clove cigarettes, may be able to swallow the souls of men during intercourse, and possesses a magical vagina that eyewitnesses describe as "creepy".

Wanted For: Impersonating an officer of the law in an effort to get a job as a bouncer at a strip club and stealing three cartons of cigarettes from an Indiana gas station using only the power of her mind. Lucretia is not known to carry weapons but should be considered dangerous if she's had too much bourbon.

Profile: Also known as Raymond Attenburrough, Ray-Ray has been practicing the black art of sorcery for a very long time. A youth filled with parlor tricks and bizarre rituals involving sawing women in half evolved into a full blown pact with Satan that granted him the powers seen today. He is known to frequent parks throughout the Atlanta area, usually with a top hat partially filled with change at his feet.

Powers: Can sever his thumb bloodlessly at will and reattach it just as easily, may be able to guess your card, is capable of jackanapery involving a ball and three cups that boggles the mind, despite having not bathed in three weeks somehow maintains a perfect fade haircut. According to some reports Ray-Ray may also be able to transform into a cheetah.

Wanted For: Ray-Ray is wanted in connection with the murder of Thomas Johansson, his wife, and their two children. The family was visiting Atlanta when they were apparently attacked in their hotel room by an adult cheetah, mauled beyond recognition, and robbed of a number of belongings. While generally not dangerous, if in cheetah form Ray-Ray possess incredible speed and sharp teeth.

Profile: Stevie Cooper, AKA Azriel the Undying, is one of the most feared sorcerers in the world. It is said that he has existed in one form or another on this plane for over ten thousand years, although he currently occupies the body of 11-year old Stevie Cooper. His powers are surpassed only by his willingness to use them to do evil.

Powers: Is capable of not wetting the bed on most nights, possesses uncanny abilities at cursive writing, can summon a pillar of fire from the sky, has glasses but claims to not need them so refuses to take them to school, can liquefy a beating heart by simply making eye contact, can communicate with insects and force them to do his bidding, can eat three entire Lunchables in a single afternoon, and can transform into a raven, wolf, and little league uniform.

Wanted For: Failure to do the dishes on three consecutive nights, frequent infractions against the "one hour of Playstation a night" rule, and has liquefied the hearts of two police officers. Azriel the Undying is known by witnesses, including his biological mother, to go "cruisin' for a bruisin'" yet somehow avoid injury. This suggests he may be impervious to physical damage and if confronted should be attacked using either psychic powers or energy weapons.

Number One Most Wanted Magician: Boggle the Magnificent

Profile: Very little is known about Boggle and his origins. It is said that he appeared one day during a hurricane off the cost of Louisiana, just swaying from side to side slowly in the midst of gale force winds. He has been sighted throughout most of the world, from Tibet to Tulsa, and never seems to remain in one place for very long. He speaks with a high, slightly effeminate voice, and tends to favor short sentences and odd mirthful words like "joy" and "happy".

Powers: Is too large to fit in most cars, can hover in place a few inches off the ground, can shoot miniature lightening bolts from his beak, speaks both French and English fluently and knows some Spanish, can camouflage himself as a bicycle, gains additional powers by consuming the blood of the unborn, can operate a convection oven, is licensed as a chauffeur, holds the secret to the Colonel's Secret Recipe, and has an exceptionally large bladder.

Wanted For: Armed robbery. In 1987 Boggle held up a 7-11 in New York with a broom painted to resemble a flamethrower. He made off with some 93 dollars in cash and two large sticks of Cajun spice beef jerky. He has also murdered 988 pregnant women and eaten their unborn children. It is rumored that when he has eaten 1000 fetuses he will ascend to godhood. He should not be considered dangerous unless you are an unborn child or a pregnant woman.

Be on the lookout for these scoundrels and if you spot one of them do not attempt to approach them yourself. Instead immediately call the authorities and explain to them which magician you have sighted. They will be prepared to deal with all manner of supernatural trouble as evidenced by the documentary "Ghostbusters 2".

Hello, Livestock here with the part of Zack's update that tells you there is a new edition of Photoshop Phriday sitting on the Internet. This Phriday the Goons paid tribute to Batman, DC Comics hero and American icon. I'm not sure what was in the drinking water, but the SA Goons thoroughly enjoyed themselves and hopefully you will as well, jerk. 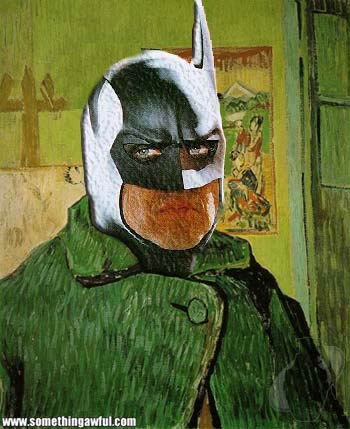