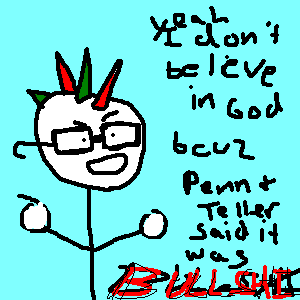 You are an adult trapped in an infant's body, forever tortured by people who should take care of you. You are tortured as proof of a miracle even though you cry out for mercy. Eventually the pain is so much that you begin to float above the crowd who is encouraged to sink barbed lines into you evertearing everhealing flesh as your blood rains down on the estatic crowd. Eventually, the pain is so much that you renounce your faith in God and spend an eternity in pain calling on Satan to avenge you. But when he arrives, he is just an impotent blowhard made of ash and flame that you consume in your rage.

You wake up in a vast, foggy field of rocks. There is no soft soil or grass. A booming voice calls out from above and tells you that there is an exit, but that you'll have to find it.
The field extends infinitely in all directions. The exit may be mere miles away, but you can't be sure which direction to go. You pick one and set out in search of the exit. You're constantly hungry and find nothing to eat, yet you do not starve. You are constantly tired but find it impossible to sleep, so you simply rest for a few hours at a time. You're naked and the air is bitterly cold, but not lethally so. The process of navigating the rocks with your bare feet is tedious and painful.
This is the totality of your existence: Wandering aimlessly through this endless, rocky field, never knowing how close to or far away from the exit you might be.
Thousands of years pass. You spend the first few years just trying to retrace your steps and get back to your point of origin. From there you start spiralling outward. Eventually you really do find the exit. It leads to an identical field of rocks.

Listen, you are stepping ON the line of anti-Semitism here, honey. I am a Jew and proud of it. Am I female? Yeah. But that doesn't mean I am only saying this "because I don't have to get circumcised." (It's spelled with an "S," by the way.) I am saying this because it's a requirement of the Jewish religion that the males be circumcised. It has been for more than five and a half thousand years.
Judaism is the guardian of the oldest surviving written language in the world and has kept a faithful, pristinely-copied and freely-, fiercely-, and openly-debated (RTFTalmud if you care to) set of continuously-followed written, communitarian laws in the history of this planet. That includes the Five Classics of Kung Fu Tze (Confucius), and the Laws of Jainism (or anything else written in Sanskrit), which are the only two sets of still-followed, written laws of even comparable age that I can think of.
The Rabbis (all of them male, every one of them in the Talmud) never once saw circumcision as some sort of plot against men. They did, however, reject their neighbors' policies of child sacrifice, child prostitution, the beating of children for the propitiation of the Gods, the following of more than one god, female "circumcision," the castration of the male of the species as used to propitiate Cybele or any local version thereof, pure blood sacrifice, and the wholesale excommunication of anyone with a skin disease (they at least tried to cure scall and leprosy when they occurred). Sure, there are many laws that seem to be the additions of man to the word of God. Like Leviticus 20:13, for example.
But please don't go about blaming all the troubles of American society upon something that is an article of faith of my people, one of the only dogmatic expressions of faith that the overwhelming majority of Jews everywhere agree upon. Especially since the group of men with the longest practice thereof, Jewish men, have not, as a group, had any problem with it for the past 5 1/2 + thousand years. I'm not saying it ought to be practiced everywhere, or even that all Americans should have it done. I'm just saying that it is what binds a Jewish man to his community, what seals his contract (that's what "Brit"/"Bris" means, "Contract.") with his God.

Don't try to lump it with a practice intended to cause pain and seal a man's contract with himself to get pleasure in the only painful, humiliating way he can (the needles thing). D/s and BDSM, etc., are practiced for a very different purpose than the Brit Milah (Jewish practice of Circumcision). Society does not "have a knife out" aimed at your penis. It has simply absorbed yet another custom of some of its citizens into its Melting Pot. Maybe it shouldn't have, but don't read societal hostility towards men into the practice of neonatal circumcision. Especially since you seem to be blissfully unaware of the word "episiotomy." Which is a dogma that the Medical Establishment holds ever dearer than "circumcision." Most neonatal pediatricians will gladly forsake the cut if you don't want your kid to have it. Most OB's will not forsake the episiotomy.

To the mods: Since I am not a platinum member, I cannot report the above offensive post. If you wish, and, in fact, if you will, please move this post to wherever you feel it is necessary. However, I do not believe that this is ban-worthy, because I have no other way to defend my entire ethnic group. This is it. I have to make my battleground where the shots are fired. And they were, most assuredly, the first shots of a battle. The entire anti-circumcision movement in the US is headed by the sort of people who see greedy Jews behind every tree, and spread their vitriol-laced semi-medical analyses of things like genetic proneness to Tay-Sachs and culturally-imbedded practice of male circumcision to unsuspecting and somewhat-dissatisfied-with-something-they-can't-quite-put-a-finger-on goons like the unfortunate grellgraxer, here. It isn't fair, but people who know that they're attacking an entire group of people never are. I know that everything I've just said seems crazy to most ears, but imagine that I'm standing in front of a vintage pickup truck full of suspiciously-large seed-pods, a truck that's merging onto a freeway. I'm waving my arms and yelling, "They're already HEEEEERE!"
That looks kind of crazy, too. But sometimes the assimilation of bad ideas and thoughtforms is just as insidious as those vegetable hive-minds. By all means, move this if you want to. But don't delete it and don't ban me. My sincere thanks.
If I were to kill my wife and son for God, I'm sure it would all work out. Either nothing bad at all would happen, a la Abraham, or there would be killings, they'd go to heaven, God would explain the whole thing, and we'd all live happily ever after for eternity. I know it sounds nuts, but I'm banking on it not happening.