Wednesday, Jul 05, 2000 by Rich "Lowtax" Kyanka (@TwitterHasBannedAllMyAccountsEver)
As more and more businesses are built across the globe, commercial flying is becoming a greater necessity than ever before. With this idea in mind, Something Awful has decided to amass a giant, comprehensive guide covering every important concept and bit of information you'll need to know while traveling through the air in a giant, white cylindrical aircraft that seemingly defies all laws of gravity and could possibly be piloted by an escaped criminal who was arrested for streaking through his ex-wife's wedding reception. 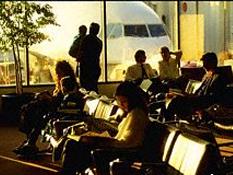 Airports (ârpôrt, -prt). Airports are gigantic, man made concrete structures designed by failed psychology students who have vowed revenge on mankind and seek our eventual downfall. They are complex, evil, challenging mazes of sadism which have been erected not as a service to travellers, but in order to study the breaking point of the human mind and the amount of time it takes before an innocent passenger is driven insane. By nature, all airports are designed with the following key factors in mind:

Every airport must be designed in the shape of a humongous air freshener. To make passengers forget the fact that they're walking around in something that is essentially used to cover up the stench of pet urine, the architects should attempt to "brighten up" the airports by adding decorative effects such as light gray concrete fins that stick out of the walls, random skylights near the men's restroom, thousands of obstructive pillars, and various items that aren't trashcans, yet travelers opt to throw their frozen yogurt cups in them (potted plants, fountains, sleeping elderly men, etc).

Since smokers should be treated the same way as leprosy victims or Howie Mandel fans, the designated smoking area should be limited to a large glass or plexiglass cubicle, where passing tourists and travellers can point and stare at the wretched, hunched over subhumans who are fighting over the seat closest to the community ashtray. Airport officials should also make sure to adhere "NO SMOKING" signs to the wall every two feet or so, and the terminal intercom should remind the public that smoking in a non-designated smoking area will result in fines up to five hundred million dollars and lethal injection.