It's an all-Vargo week as the Philly Golden Boy finishes up his Festival coverage with a review of his new best friend's latest film Flight and a recap of some highlights from the rest of the event.

EXPECTATIONS: Going into Flight, I had the sneaking suspicion that this poor film was setting itself up for massive failure. Before release, there was a moderate amount of buzz surrounding it, (It was the closing night feature at both the New York and Philadelphia film festivals) but honestly, all of it feels vaguely forced. Outside of film circles, I can't find a single person who is honestly excited for this movie, or anyone who can even describe it as anything other than "That Plane Movie." And screaming "It's Robert Zemeckis' new live-action movie" doesn't do much for American audiences when I've had to spend the past three weeks reminding people who Robert Zemeckis is. (And I've kinda been talking about him a lot lately.) 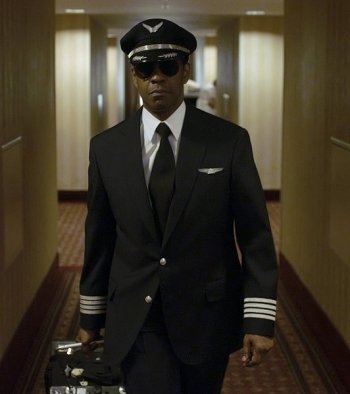 When you name your main character Whip Whitaker, you have to then endevour to make him look as cool as possible to make up for it.REALITY: Flight is a movie about alcohol that starts off with a Barenaked Ladies song about alcohol and then shows us an actual naked lady. That's basically how the entire film goes. It does something vaguely clever and then completely ruins it by tugging at your sleeve and saying "Hey, hey. You see what I did there? That was pretty clever. I'm clever."

Denzel Washington plays Captain Whip Whitaker, a hard-partying pilot who garners national attention when he inverts a doomed airplane and regains control, managing to save 95% of the passengers on board. However, that other 5% manages to bite him in the ass when blood tests reveal the insane amounts of alcohol and cocaine in his system. Even though Whip's investigation and possible sentencing are the driving force behind the narrative, these plot points take a back seat to investigating Whip's addictions and denial. In the hospital, Whip begins a relationship with a recovering heroin addict (Kelly Reilly), which a lesser movie would have made his saving grace. Flight eschews the common "addict is saved by a woman's love" idea and instead depicts a more realistic "addict likes a woman, but really, really likes the thing he's addicted to more, because that's how addiction works, yo" progression. This is not a particularly cheerful movie.

The main issue with this, however, is that this movie is, at best, very confused about its own messages. It seems ill-advised that a film that's all about the evils of alcoholism and addiction would make its most likable character a drug dealer (John Goodman). Even worse, the film actually makes cocaine look AWESOME and shows how great it is to level you out. Hell, at one point, we actually bring in the coke dealer to save the day. So, just so we're clear, Booze-Bad, Coke-Good.

Furthermore, the movie makes its religious themes very clear, and not subtly, either. The plane clips a church on the way down; Whip's lawyer (Don Cheadle) makes the insurance company declare the crash an Act of God; AA says to Trust in God as you Understand Him. The film covers believers of all kinds, from the non-believer to the newly converted to the straight-edge devout "Praise Jesus!" type. And yet all of these people are shown as enablers to Whip, while hinting that maybe the crash happened for a reason. Which is a good theme, except it means that God killed six people so that one dude would quit drinking. Eventually. After a few months. 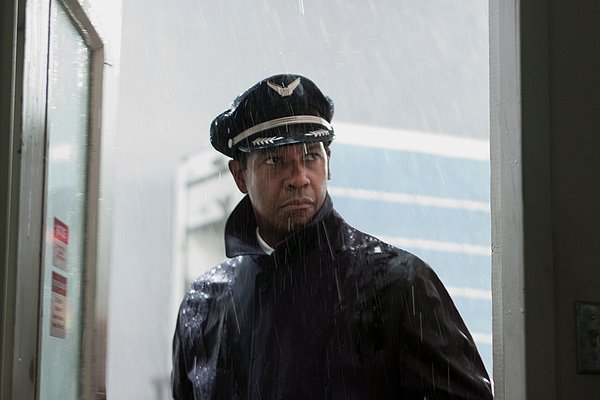 He looks in good health for an alcoholic, he doesn't even have a sniffle from that rain.

In fact, when you've spent the entire film setting up how nothing can break this man's denial, there's no real way to have him come clean in a satisfying manner. When Whip finally does admit his addiction, it happens at what is plot-wise the most dramatic point possible, but thematically, it leaves the audience thinking "Really? THAT'S what did it?" The worst part is, the more you think about it, the more you realize that the film about the alcoholic actually concludes in a Moment of Clarity. Like the naked-lady opening, most of Cloud Atlas, and your average high-concept article at Cracked.com, this ending pushes past clever and ends up teetering on the edge of insanely stupid.

Flight does demonstrate what Zemeckis does best, especially when it comes to music and effects. Every character in the film seems to have his or her own personal theme song, and while having John Goodman come out to "Sympathy For The Devil" is another one of those mixed messages I was talking about, there's something pitch-perfect about having Denzel snort coke to Joe Cocker's "Feelin' Alright." So good job, whoever is in charge of buying song rights for this movie!

Now, the plane crash scene itself is very intense, and Denzel's drunken stoicism is the highlight of the film. But that's it, the film uses its high point in the first twenty minutes. And it's not the best plane crash of the year. (That goes to The Grey) or even the best plane crash Zemeckis has ever directed. (Though lately he's been making some spectacular trainwrecks. Heyoooo!!) That's basically where this film fits in. Even the sum of all its good parts make it merely just "good." Which is okay, normally. However, in this case, with the genre that it's in, the time that it's released, and the hype that it's tried to generate, "good" is... not great.

MINORITY REPORT: Addiction is a very difficult thing to portray on film. You risk losing your audience if you don't let them see the hero beat his demons and overcome his addiction, but if you decide to go through with this kind of redemption storyline, you risk robbing the film of its value. - Ian "Professor Clumsy" Maddison