When he bows before the God-pillar, we try to topple it over and crush him, but the ancient stone is too heavy. Hopmo then hisses harsh words that tell us we are doing something we shouldn't, and some dark wizardry in his voice makes our insides hurt and our faces feel hot. I have seen the effects of this horrible power, the cheeks of my fellow men turning red and their eyes focusing on the ground.

When we punch at him, he moves away and swats our knuckles. When we try to tackle him so that we may hold him down and punch him without interruption, he pushes us away. When we ask him to build a device that will hold him down for us, he refuses. 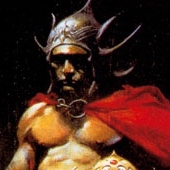 Hopmo, however, outwitted us. He drove his hovercycle directly above us without slowing down.

We collect egg-shaped building crystals from abandoned structures on the outskirts of the city, mindful of the bumbling ashbugs that test the Mage Guild's defensive wards from time to time. The crystals are heavy, but they are easily gripped in one hand. We throw them at Hopmo's home from a mile away, but the crystals never travel more than twenty armspans before clattering on the cobbletone roads. How Hopmo manages to avoid every projectile is a mystery.

We left a firetrap in a crowded market, but before Hopmo could step on it, the unthinkable happened. An aged woman - her senses undoubtedly dulled by the passage of years - approached the trap and purchased it for half as many royal brondles as it was worth.

On the rare occassion that we are able to sneak up on his sleeping form, Hopmo always wakes up when we yank the pillow out from under his head, leaving us with no time to press it against his face and smother him.

When he wasn't looking, we took his cup of drinkzel and poured it all out, then replaced it with poison gas. Hopmo came back to the cup, frowned, then walked away without even taking a sip. Some of the others suggested that we try again but replace the cup with poison gas as well. I'm not so sure even that would work.

We warned Hopmo that we would hold our breaths, and would not resume respiration until he committed suicide. After rubbing his chin and scrunching his eyebrows, Hopmo explained that if he killed himself, it would be impossible for him to make sure that we held up our end of the bargain by breathing again.

We lived on the stalest of breads, pooling our resources to enlist the aid of a powerful warlock.

We were assure that just one lesser bone warrior would be enough for the job. Knowing our enemy, we insisted upon the eight most powerful demons the warlock was able to call forth.

On that fateful day, the warlock stood before Hopmo and informed him of his fate, cackling with glee as the large man remained silent. Producing an odd-looking binding of blank parchments that he called the trapper keeper of lost souls, our temporary ally set to summoning the first demon by writing its true name backwards with perfect penmanship.

Before the warlock could finish the ritual, Hopmo casually gave his elbow a bump from behind, resulting in a wild scribble that totally ruined half the page. Another summoning was attempted, but Hopmo's strength could not be denied as he bumped the warlock's elbow again, then pushed his kneecap into the back of the smaller man's knee, making the master of dark arts wobble comically.

Hopmo will outlive us all, my friends, unless our efforts increase tenfold.