How to Make a Sci-Fi Movie 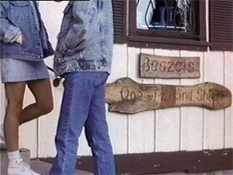 Good science fiction cameramen know where the REAL action is.

The bad guy should always bring "advanced" future technology with him to impress the people of the past, who as history has proven time and time again, are very stupid. These items can include a laser gun, cellphone, or deck of playing cards that shipped without the "How to Play Poker" insert card. The hero should arrive shortly after the bad guy, yet always stay one step behind him until the fantastic climax which should ideally involve riding horses and something that blows up (not the horses). Despite the fact that the hero is trying to kill the bad guy so he won't change history, the protagonist should feel free to interact with his surroundings without any care. After all, only the bad guy can affect history. Good guys are immune to that kind of thing. It's like, you know, a US law or something.

Cloning Movie - These all take place in the non post-apocalyptic future (ie, Canada), and revolve around complex societal "what if?" issues. What if cloning was freely available and any human could make an exact replica of themselves? What if these clones had a sense of morality and wondered if they lacked a soul? What if somebody made a movie that had one-half the normal science fiction budget because instead of having to staple together an alien suit, they simply bought a few hundred different pairs of pants that the "clones" could wear? This is also the easiest way to create tension in a film, as clones just bring assloads of tension to any picture:

BOB: "I enjoy having sex with you too. But am I Bob, or just his clone?"

(Suddenly the door busts open and Bob storms in)

BOB: "You mean you asked yourself."

This goes on for roughly two hours, until the audience realizes they don't really care enough about Bob to figure out who the clone is, or the clone decides Bob is such a big loser that he doesn't even want to even bother being his clone.

Fighting for Survival Amidst a Post-Apocalyptic Landscape of Destruction Movie - Bands of closeknit tribal communities attempt to fend off the raiders who seek to plunder their water or cattle or walking canes or bottle caps or water cattle or whatever the hell raiders want to steal in the future. Props can be found by breaking into a junkyard, spraying Elmer's glue all across the parts, and then rolling them through some kid's sandbox while beating them with a crowbar. Beating the parts, not the kid. Beating kids with a crowbar is illegal in almost every state, except possibly Alabama.

Everything in the future is dirty and full of sand, including the people, so major scenes can be filmed in outdoor volleyball courts (assuming you can scare off the homeless people who enjoy relieving themselves on major props). This is because the future is so bleak. And post-apocalyptic. The hero should preferably befriend a lonely boy who has some blatant handicap, such as a missing eye or a malfunctioning brain which causes him to be captured by the bad guys every time he gets out of bed in the morning. Eventually the head bad guy, who wears a highly comical outfit, should capture the hero and prepare to kill him with his patented "Large Object or Pit of Death." The hero should escape, free the idiot kid, and drive off while the raider camp explodes in slow motion. This is because in the future, things blow up really slow... and over and over again from slightly different camera angles. Why? I don't know, but I'd imagine it has something to do with the fact that all the villagers smell like a toxic waste dump and are singlehandedly decimating the entire oxygen supply, thereby slowing the expansion of nearby fiery infernos.

Killer Robot Movie - Oh no! Robots, instead of being obedient to us humans, have decided to NOT be obedient to us! Oh, the tables have indeed been turned! Luckily, the robots have the collective IQ of the individual Radio Shack parts that make them up, so humans don't really have much to fear. The biggest selling point of these computerized menaces is the fact that they're always bullet proof. This should be stressed repeatedly. A robot should lumber out of a smoking building, where the Police should unload six million rounds into it and still not be able to grasp the fact that their guns have no effect on the robot. On a related note, I've always wondered what happened to the billions of bullets once they've ricocheted off the robot. I mean, where do they go? I can just picture the piles of innocent children and pets who were ventilated full of holes because the cops were too stupid to quit firing after they reloaded for the 25th consecutive time.

Eventually the hero should break into the top secret robot headquarters, which is guarded by the least effective robot, like the handicapped one who's had his head replaced with a bag of Doritos and is armed with an 18th century flintlock pistol. There the hero will confront the meglomaniacal robot AI. In movies, AI stands for "Anti Intelligence," because whatever is powered by the AI usually ends up making the most idiotic decisions in the history of the universe. For crying out loud, if robots really want to enslave all of mankind, they probably shouldn't go about it by stomping around in public and tossing business executives through glass windows. What the hell does that accomplish anyway, except making the robots look like jerks and creating PR nightmares?

Alien-parasite-infested humans and robots lack the ability to travel at a rate faster than a "slow, lumbering, drunken stumble." This is because they use futuristic technology which allows them to ALWAYS stay two steps behind the Olympic sprinter who's fleeing at the speed of light, no matter how slow the alien / robot walks. I'm not sure exactly how that works, but if I were to guess, I'd say it has something to do with caching your browser's cookies or something. 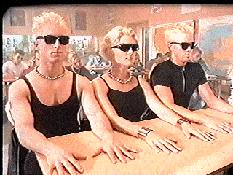 The aliens are disguised as HUMAN BEINGS! Watch the savings just ROLL IN!

Despite mastering intergalactic travel and creating weapons that can turn humans into quivering blobs of mucous within milliseconds, aliens are almost always vulnerable to some ordinary, everyday object. If you're ever being chased by an alien, lead them into a grocery store and start throwing everything you can find at them. Chances are that some object, or some combination of objects, will cause them to melt and / or explode. Then you can triumphantly exclaim, "cleanup on aisle six" and grin into the camera. Even if you're not in aisle six.

Whenever somebody says, "it's quiet," somebody else MUST reply, "yeah... TOO quiet." At that point, the camera should shift into the alien-eye-view, who is currently crouching in some bushes or hiding behind a pillar in the parking garage or staring at the lead actress' ass. Science fiction cameramen know that, much like them, alien priorities start with women's asses and THEN move to conquering the world.

The streets are ALWAYS wet at night, despite the fact that it never rains. You see, in the future, the Earth has a severe problem with the night sweats. It also has a drinking problem, but it gets a bit more difficult when trying to portray the world taking a piss.

The hero of the movie never has a strong background in "saving the world" skills. All the chumps who attended Hero School and grew up firing howitzers at mock alien spacecrafts in preparation for the invasion are instantly wiped out offcamera by the evil beings from another dimension. Then, from no-man's land in the west, comes the lone hero, who just got done picking strawberries or repairing dishwashers or whatever mysterious job he had. Likewise, all the military organizations and trained killers should be completely ineffective against the enemy and do nothing but publicly showcase how powerful the bad guy is. I think the government should immediately cut all funding to the military and instead begin handing it to the guys LEAST likely to ever save the world, since in the movies, they always do. Next time you see that junkie shooting up with a gallon of Windex in the alleyway, hand him a 50 dollar bill and say, "hey buddy, thanks in advance for protecting me from the giant alien dog that shoots lasers from its eyes." I bet he'll even know what you're talking about.

Submit your science fiction movie hints and tips to contribute to part II! Email me now!