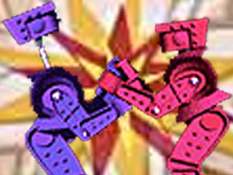 THE MAIN CHARACTER: The Main Character should usually be a young male, but it can occasionally be a female who acts like a young male. This character must be a loner with a shady background, one that forced him to overcome all odds to merely survive. The father should either be a mysterious entity who the Main Character has never met, or a real jerk. Regardless, the father will have no role in the cartoon except to be either killed off (and give the main character a motive for wanting to destroy billions of dollars worth of evil robots) or to appear towards the end of the film as the Horribly Evil Badguy. The mother shouldn't be introduced at all because she just cooks and cleans. While Vertical Hair Syndrome isn't required, it's often preferred.

THE BEST FRIEND: The Best Friend must be smaller and inferior in every way to the main character. He should be either an idiotic childhood friend or somebody who has grouped up with him to fight a common enemy. The Main Character should not be able to travel 10 feet without his moronic pal being captured by demons or falling into some kind of pit. At the end of the film, the sidekick should attempt to make up for being such a nuisance by taking a bullet and being killed protecting the main character, but his death scene will never have the desired effect on the audience. Instead of being touching and emotional, people watching the video will instead cheer and rewind the scene a couple hundred times until their DVD player combusts.

THE SIDEKICK: Much like the Best Friend, the Sidekick should play no vital role in the feature except to continually emphasize how superior the main character is. However, the Sidekick is usually a non-human entity and often a collection of random shapes that one of the artists put together after drinking beer spiked with crystal meth. This character plays emotions from one polar side of the spectrum; for example, it's either 100% horny or 100% innocent and childlike. There is no middle ground. This trait results in hilarious antics that further the plot in some inexplicable way that, when written down, would earn a C- on a 5th grade story assignment.

THE HORRIBLY EVIL BADGUY: This character's main motive is to destroy a large plot of land and rule the remains. Of course any normal person would choose to first rule the land and THEN destroy it, but Anime (as pointed out) has several notable differences which separate it from our version of reality. The Horribly Evil Badguy should have limitless funds which either materialize out of nowhere or come from a very large, vague, multinational company he owns. All of this money should be invested in creating a gigantic base which either floats or is embedded inside natural landscape (mountains, the ocean, Marlon Brando's hollowed-out chest, etc etc). It should never be explained how this 50-square mile base was ever constructed or how it was able to remain a secret despite the fact that its monthly electric bill is larger than the entire US GNP. The film should also fail to explain how the Horribly Evil Badguy is able to employ so many people even though his "secret" plans to blow up half of the world are known by even deaf and blind five-year old children. 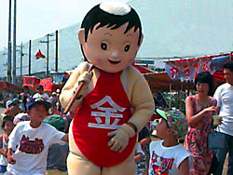 When thinking about Anime, keep in mind that scenes like this are commonplace in Japan.

THE EVIL ALIEN / DEMON / ROBOT RACE: As a rule of thumb, all aliens, demons, and robots are evil and enjoy destroying the Earth. Unfortunately for the human race, not even the strongest army can defeat these hideous creatures. Part of the fault in this revolves around the fact that the army's solution always involves firing cannons at the enemies. If that doesn't work, the army moves to phase two, "firing larger cannons." Once they realize that has no effect, the final part of their plan is implemented: "dropping a nuclear warhead on the enemy." By that point either the entire army or human race has been obliterated, so there's no telling what moronic phase comes after that.

While the robots and aliens don't usually have a hard time invading Earth, the demons often need an excuse to appear in our dimension and begin raping cheerleaders and nurses. This can really be any weak excuse, ranging from some architects discovering an ancient artifact, to some aspiring magician attempting a new routine from a mystic book of black magic. Heck, staring at blocked out cable channels on your television is reason enough for the demons to arrive.

In addition to that major difference, the demons will not use conventional weapons such as machineguns or laser cannons to kill humans. They will somehow be able to shoot yellow balls from their hands or simply destroy everything within a 50-foot radius by jumping straight up and causing the background scenery to change into a series of long vertical lines which scroll down really fast. The demons should also have a couple thousand anti-human weapons strapped to their bodies, also known as the the 400-foot long snaking tentacle of doom. This infers that Hell must indeed be a very large place, because 400-foot long tentacles aren't exactly the easiest things in the world to compact.

Aliens and robots take advantage of "advanced technology" to kill their prey (namely us). For the robots, "advanced technology" means "guns which are four times the size of normal guns yet apparently weigh 1/4th the mass." These guns can level entire buildings when shot at, yet have a difficult time hitting the teenage boy who's jumping around the post-apocalyptic street like a nutball hopped up on goofball. Aliens sometimes employ these weapons but also use "biotechnological weapons" which are just like the aforementioned guns only they're green, curvy, and shoot green snotballs that detonate upon impact.

CHARACTER X: Mysterious person who hangs around in the shadows to help the Main Character out just in the knick of time. Towards the end of the show, he should also teach the Main Character some magic trick or provide him with a magic weapon that will be directly responsible for defeating the Horribly Evil Badguy. Character X should either be from an alternate dimension or some guy who was laid off from the Horribly Evil Badguy's company when he suddenly decided he should give up importing wicker baskets and instead turn his attention on building a high-tech base the size of 3Com Stadium.