This weekend sees us tackling a bumper crop of movies with a huge variation in quality. By "huge" I mean "some of them are worse than others and one is pretty good." Try and guess which is the good one; if you're an anime fan, I bet you'll be dead wrong.

EXPECTATIONS: The Underworld franchise is like a series of terrible nightmares. Every time one comes along, I find myself transported to this dark place full of paralyzing terror that I don't fully understand, only to come out of it in a cold sweat, reeking of shame. My only hope for Underworld: Awakening is that by setting the film in the future, the series will reboot itself and start fresh with a premise that might halfway make sense this time.

REALITY: Okay, so maybe I was asking for too much. It's clear that I have no great love (or even respect) for the Underworld series, but it's only because I know action films can be intelligently crafted and cleverly written. Those films exist; there are people around the world making them right now as you read this. There is absolutely no reason why a film featuring werewolves and vampires battling it out amid a hail of gunfire can't also feature things like character development and a coherent plot, and yet the producers of the Underworld series have managed to squeeze out one more championship dook in the hopes of cashing in on people who just don't know any better. 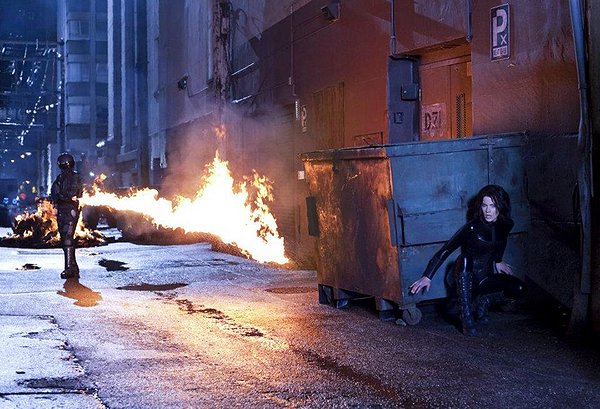 I remember this from Lethal Weapon 4.

This time around, the humans have discovered the existence of vampires and lycans and have begun systematically exterminating them. After a botched escape attempt, Selene (Kate Beckinsale) is captured and cryogenically frozen. Twelve years later, she is mysteriously awoken to find herself in a world where vampires and lycans are in hiding (how is this any different?). After successfully escaping with a young girl (India Eisley) with whom she has a telepathic link, Selene meets up with a group of vampires and a human detective (Michael Ealy) to take down the corporation that held her captive. Because that isn't already the plot of a completely different action-horror franchise...

The most pressing question for a film like this is "Is the action any good?" It is not. It's watchable, certainly, but none of it means anything. For example: when Selene breaks out of the cryo-lab, she slices and murders her way through an entire shift's worth of security guards. We don't know what this lab is or who these people are, but because it's the most expedient way of getting Selene out of the building, she leaves not a single one alive. The film had already opened with not one but two escape sequences that told us very little about the story we were about to watch. Adding a third escape right away only keeps us further in the dark, when the film could have easily taken its time and let us discover what kind of future this is along with Selene. 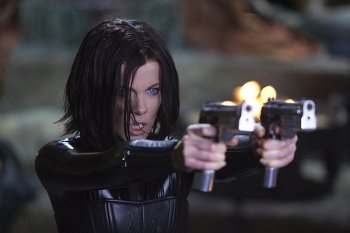 They always give people two guns to make them look cool. Why not three?Elsewhere, the big standoff between vampires and lycans (which happens in the middle of the movie for no conceivable reason) leaves a lot to be desired. The werewolf costumes are laughable, looking more like they belong in an Underworld parody than in the actual franchise. The vampire weaponry seems specifically designed to be ostentatious without actually being effective. Their arsenal includes modified Klingon bat'leths and grenades that explode in a shiny silver gas. Also, the main hero guy (Theo James) has a razor whip that seems hilariously unwieldy. Most of these weapons only get one use, because the majority of the battle consists of people firing fully automatic pistols at giant CGI dogs.

Exacerbating the boring action is how the film implements 3D. Specifically, it doesn't. The 3D only serves to expand the depth of the scenery, but the film is so poorly blocked and staged that there's nothing worth looking at in the background in the first place. There are maybe two or three scenes that really utilize the 3D technology, and all of them feature werewolves running down a narrow corridor at no one in particular. The rest of the time, you may as well take the glasses off, because most of the film isn't even in 3D. Paying the three extra dollars for 3D glasses will accomplish nothing but convincing studios that, yes, you are stupid enough to pay three extra dollars for no reason.

Underworld: Awakening 3D completely and utterly fails to live up to both parts of its subtitle. Not only is the 3D almost non-existent, but also at no point in the film does any kind of awakening take place. Don't try to tell me Selene had an awakening. She didn't suddenly have a religious experience; she was unfrozen. There's a difference.

MINORITY REPORT: Given the way everyone responds when I ask them why they'd ever want to see this film, I must make this conclusion: If movie marketers were forced to be honest, they'd rename this series Kate Beckinsale's Ass: The Movie. - Martin R. "Vargo" Schneider