Of Sex and Childbirth, Part I 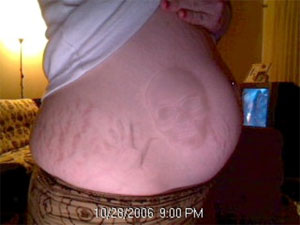 You might think pregnancy is a beautiful thing. You might believe a child will bring nothing but constant joy and meaning to your otherwise empty and unfulfilled life. You might assume love will always find a way. I too was much like you (stupid) before I turned into me (slightly less stupid but much more sweaty).

As a survivor of two wife pregnancies (same wife, although she wisely chose to birth a different child each time), it is my solemn duty to warn every clueless male of the many dangerous perils associated with the creature crammed inside your wife's gut. For those of you who have never knocked up some broad and caused a tiny scary human to grow inside her, I'll catch you up with the rest of us.

THE ABRIDGED GUIDE TO KNOCKING UP SOME BROAD, THEREBY CREATING AN ANGRY LIVING CREATURE INSIDE HER

The baby's arm is some sort of windshield wiper.1) Locate a woman. Try to find one who you feel is "on your level;" that is, don't go after unattainable women like supermodels or famous politicians or anybody else non-comatose. Get practical and aim lower. As a general rule of thumb, the less teeth a woman has, the more likely you'll be able to create babies inside her either through treachery or political subterfuge. LESS TEETH = MORE BABIES.

2) Trick the woman into believing you aren't always lying to her all the time about everything. Women don't like discovering they've been lied to, and this could possibly serve as a deal-breaker when you're trying to shoot sperm inside her you-know-what hole. As some cruel joke on humanity, god chose to install a hyperactive lying gene in each and every male, adding yet another horribly incompatible characteristic to fuel the lucrative marriage-book economy.

I lie to my wife constantly, 24 hours each day. Yes, you read that correctly, 24 hours a day. One time I was unable to sleep, and my wife asked, "are you asleep?" I replied "yes" and reaped the riches of yet another successful deception (if awake, she was probably going to ask me to clean the sink or paint the toilet or whatever). Such advanced lies are recommended for only expert liars, as women can easily see through transparent fraud.

A few years ago, when I was just a novice liar, I caught the oven on fire because I accidentally on purpose put her VHS copy of "Romeo Must Die" in it. Being a rookie deceptionist at the time, I subsequently blamed our one-year old daughter. I was busted after my wife conducted a lengthy investigation, determining such a scenario was physically impossible because our one-year old daughter wasn't technically born at the time. As you expert liars may know, I should have crafted a much more believable lie by blaming somebody who could have physically burned up the stove, such as my wife. BETTER LIES = BETTER LIVES. Oh, and if my wife is actually reading this, everything I just wrote was a lie, dear.

3) Repeatedly smash your man-part into her woman-hole until sex is somehow made. Procreation resembles air travel in many ways: I do not fully understand how it works, I'm extremely nervous during the process, and I usually have to pay a lot of money to engage in it. If you somehow manage to accomplish this stunning feat (not air travel), congratulations, you have successfully made some sex! Consider yourself the Johnny Appleseed of sperm. This brings me to my last point: SEX = JOHNNY APPLESEED.

It's probably pretty easy to have sex with this woman. And look, she comes with her own bag!While graphic novels detailing the previous three steps don't exactly fly off the bookstore shelves (mostly because nobody bothers putting them on the shelves to begin with, also books cannot fly), countless authors have padded their bank accounts from the ensuing pregnancy and baby-raising stages in life. Once again, I place the blame fairly on the shoulders of women, who possess some innate genetic desire commanding them to purchase Costco-sized amounts of baby books.

Now I have no problem with reading crap to learn about pregnancy and babies and "fallopian tubes," which I think connect the vulva to the stamen. One time my butt started bleeding, so I bought a tube of hemorrhoid ointment and read the back label to see what was in it ("hemorrhoid ointment") and where I should put it (up my butt). This careful research prevented me from making a critical mistake, such as placing the cream inside a butt which did not belong to or attach to me. So much like butt medication, it doesn't hurt to learn information about your child. Children are nature's butts.

The issue here revolves around the fact pregnancy and baby books provide little to no information, instead preying upon women rendered helpless by their merciless book-purchasing gene. My wife stockpiled nearly twenty thousands encyclopedias of infant research, all of which boil down to the following highly medical statement: "we have no idea." To make matters worse, they take their idiocy one step further and present contradictory solutions to common problems, further confusing anybody gullible enough to read tripe like:

QUESTION: My beautiful baby daughter / son Porsche Carrera Jackson Polyp III has had problems sleeping at night! He wakes up one hour after bed, crying and covered in blood! How can we make him stay asleep and determine whose blood he's bathing in?

ANSWER: As a MEDICAL DOCTOR specializing in DOCTORING SHIT UP ALL OVER THE JOINT, I recommend putting your child to bed at an earlier time. The average two-year old requires 20 hours of sleep a day, or else physicians can classify them as "criminally cranky." However, some babies need less sleep, so you may want to put him to bed at a later time. Also you may want to consider not putting him to bed at all. Or forcing a medication-induced coma, waking him once he turns 23. I am a DOCTOR.

Repeat this style of "solutions" for the next 500 pages, slap a $30 price tag on it, and you've got your standard baby care book. Deep down in her heart, my wife knows these books offer no new advice or secret tips to solve baby-raisin' problems, but as the saying goes, "hope springs eternal." Hope also springs credit cards out of your wallet multiple times, so feel free to be like me and abandon it.

Well that's all the time we have for this week's Hogosphere. Tune in next Monday, when we tackle the ins (vaginas) and outs (penises) of pregnancy, and I explain the grueling nine-month process required to squirt a creature out of the same hole women pee from. I teach you all this because I love you.