An odd week, with the much-anticipated The Hunger Games proving a huge disappointment to Ian "Professor Clumsy" Maddison; the completely un-anticipated Thin Ice leaving Joseph "Jay Dub" Wade cold (see what I did there?); and the rather unexpected Friends with Kids working out well enough for Martin R. "Vargo" Schneider.

EXPECTATIONS: I remember the staff at the local cinema trying to sell me a copy of the novel upon which The Hunger Games is based when I went to see What's Your Number? In the back of my mind I always knew I'd be back to watch this thing eventually. Thankfully, The Hunger Games seems to be getting a lot of positive attention from my fellow critics, and we all know I would never disagree with any of those guys, right?

REALITY: I think the best word to describe The Hunger Games would be "problematic". It's bloated and long-winded, and while it does have its emotionally powerful moments, they are few and far between. When it needs to be brisk, it lingers on useless characterisation, and when it needs to slow down and give us some depth it rushes to a contrived climax.

In a bizarre distant future, following an unsuccessful uprising, the rich live in a glorious city and the poor are forced to scrape together an existence in twelve districts where they produce valuable things in exchange for food. To make matters worse, each of these districts has to offer up a teenaged boy and girl every year to take part in the titular Hunger Games, where they fight to the very last person. This year, District 12 offers Katniss Everdeen (Jennifer Lawrence) and Peeta Mellark (Josh Hutcherson). Everyone seems to think that Katniss is something special, and so former champion Haymitch (Woody Harrelson), self-obsessed weirdo Effie Trinket (Elizabeth Banks) and overly emotional stylist Cinna (Lenny Kravitz) raise her profile so she can get all the help she needs from various sponsors. Finally, the games begin and Katniss must fight for survival against the other contenders who have formed an uneasy alliance to get her out of the picture. 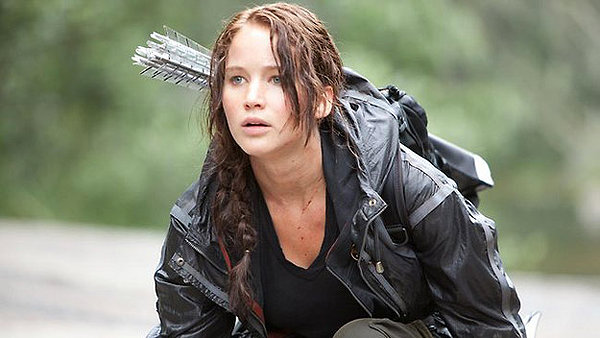 Urgh, this film is for girls!

I know that rabid fans of the hugely popular novel would declare it sacrilegious to trim any of the fat from the narrative to make it more cinematic, but those people clearly care not-a-jot for the cinematic arts and should not be listened to. In adapting The Hunger Games, writers Gary Ross, Suzanne Collins and Billy Ray have opted to ignore my advice and have gone about forcing as much content into the first act of the film as they possibly can. It takes an eternity to arrive at the Games of Hunger, and by that point it all starts to feel like they're in a sudden hurry to get to the end.

The first act is overloaded with characters who really serve no purpose and then subsequently vanish when the time comes. For all the time spent humanising Effie, Cinna and the rest, the supporting characters who really matter and really need fleshing out are the fellow Hunger Games contestants. We are introduced to them in a very vague way. They all get named, though I defy any of you to put all those names to the faces after only a single viewing of the film, and they all get one trait so you can keep track of them to some extent. One of them is good at throwing knives, one is sneaky, one is big and strong, one is the alpha male leader-type, etc. As the story progresses, indeterminable amounts of them die, usually off-screen and it's very hard to keep track of or even care about any of them.

Most of the frail, scared kids from other districts die within the first few minutes of the Games, as might be expected, so we're left with the sadistic murderers from Districts 1 and 2, who were raised from birth to be skilled killers (this is addressed in a sentence or two, but never really properly established). So we have these four dangerous citizens, and then district 12, which offers the two most progressively-minded young people on the planet (apparently). Katniss is constantly being told that she is special and needs to win, and we never doubt that she will, but it all rings so false. This is the first time someone has shown promise without being a crazed killer? After all these years of presiding over Hunger Games contestants, this is the first time Haymitch and Cinna have really cared? This is the first someone has ever said "Hey, you know what? These teenage murder sports are morally questionable"? I just don't buy that as a premise. 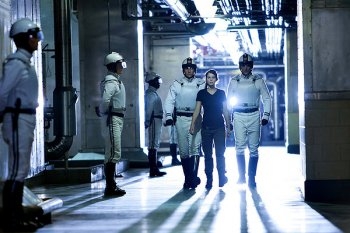 I promise this is from the same film as that other screenshot.There really isn't any kind of effective antagonist here, either. Sure there's President Snow (Donald Sutherland), the head of the dystopian society, and there's Seneca Crane (Wes Bentley), who is in charge of the Hunger Games themselves, but neither of them feels like a direct antagonist to Katniss. The closest we really have is Cato (Alexander Ludwig), who leads an alliance against Katniss. Of course, he suffers from the same lack of development as the other characters. When the third act rolls along and the protagonists are forced to face off against him, it takes a while to realise who he even is and what's going on, so much happens off-screen.

Something else that would have made The Hunger Games more effective is just a little dash of believable jeopardy. The camera very rarely leaves our protagonist and is entirely filmed with hand-held photography. This removes a layer of artifice from the film and is an interesting stylistic choice for a movie aimed at such a young audience, but what it inadvertently does is elevate Katniss to the level of cinematic immortality. We know that if she were to ever die the film would either end abruptly or fill out its remaining running time with a single, lingering shot of her corpse. Neither of those are likely to happen in a film for teenagers, so the only remaining option is that she is immortal and everything she does is portentous and meaningful while everyone else is just there to assist her purpose.

There are some hints at good ideas here. For example, Katniss' relationship with young Rue (Amandla Stenberg) reflects the love she has for the sister she left behind. This small subplot, emotionally powerful and politically loaded, culminates in an uprising in district 11, an all-black district. Themes of racial segregation and a persisting commitment to a once-failed rebellion suddenly surface and threaten to turn the whole film into something massively interesting, but then they just vanish. The whole uprising subplot takes up only a single scene and is immediately abandoned. I worry that so much of this is just foreshadowing for the inevitable sequels.

I can't help but feel that all of these problems could have been avoided if they weren't trying so hard to convert the novel into a film as directly as possible. So many of these characters, so much of this exposition, could all have been excised comfortably. They have the perfect framing device right there in the narrative with the two commentators, Caesar (Stanley Tucci) and Claudius (Toby Jones), giving the lowdown on what's happening, often addressing the audience directly to explain some of the more far-fetched elements. A film focusing on the actual event of the games with these two seasoned character actors guiding us through it could have been a masterpiece of cultural satire, like a modern Death Race 2000. Instead, it's just a plodding, boring mess.

MINORITY REPORT: Just to recap: The official Current Releases position is that Twilight is awesome and Hunger Games sucks. I sure am glad I have this Literature degree. - Martin R. "Vargo" Schneider