Why haven't you bought my book yet MFer?!?Before I start this article I want to say a shoutout to my girls at Great Alaskan Bush Company in Anchorage. Storm is coming and it might create a tornado of dollar bills or something and cut you up so watch out and spill all your valtrexes all over the place create like a herpicide slick.

Girl you know you can spread that shit even if you're not having an outbreak. Get vaccinated Rick Perry will hook you up with dog shots at the kennel keep your cervix from turning black and getting parvo or whatever.

My prayers or whatever are with yall is my point.

Alright so as you know I have been following the campaign covering the Republican primary for this stupid website and I haven't been writing shit because, hello, fucking book dropped like double hiroshimas over here. 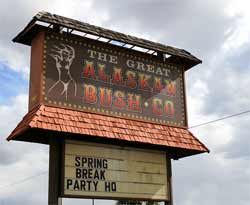 Ah the great times I have had at this place well there was the time I...actually I blacked out drunk every time but I do know that I set fire to some dude's PT cruiser in the lot and also might have shot a gun at a fireman but only as a prank.I had to take a break to sign autographs and shit. Knocked the glasses off a bunch of girls at the book store, messed up their barrettes and took them to my hotel and slimed up their sweaters. I said I was into women's studies and then I showed them how empowering it is to be walking like a cowboy for a week.

"Blog that raw sauce, Diablo Cody!" I told this one girl and she tried to mace me. Luckily I have worked up an immunity to it, but only from messing around with bear spray not because I do sex assaults or anything.

So the main story headline shit is that Herman Cain is being subjected to a high tech lynching. I thought maybe decepticons were trying to wrap monster cables around his neck but no it means a bunch of old white ladies telling stories about how he tried to get vanilla stank on his chocolate.

First of all I am bias. I told you in the past Herman Cain is my MAN. That dude is the straightest shooter I have ever met I hang out with him all the time. We drink Stroh's and play asshole with his campaign staff. 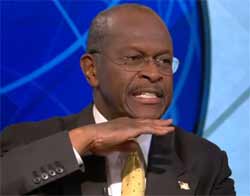 His wife is only waist high I have met her.Last time his campaign manager was the asshole and I made him eat a cigarette every time I put my thumb on the table. By the time the game was over he looked like he was going to die so we went out in the loading area behind the hotel and filmed a campaign commercial. He puked everywhere right afterwards and when hotel security came by we claimed some dog ate an ashtray and puked it out.

Second thing is he probably did it but so what? I mean Herman Cain is pretty much always going up to women and saying "you're the same height as my wife" and then he holds up his hand and stares at them and slowly lowers his hand towards his crotch and then he does this hip swiveling thing that makes me crack up every time. It's a joke ladies. Holy shit. He puts up a sign-in sheet to get "Cained" at every hotel so just sign up on that if you want to. Also his FBI shirt? Female Body Inspector. Uhhh look up sense of humor in a dictionary so you can find it. 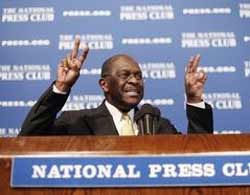 These old white ladies act like they don't want it. I'm sorry Merryl Streep I didn't realize somebody didn't like all the pizza you can eat and free breast exam jokes. It's not like he sucked a baby's dick like Joe Paterno did. What the fuck dude it's a baby. Do babies even get boners? Fucking disgusting what Joe Paterno did to those babies. I can't believe he, Joe Paterno, put his sex hands on baby balls. You're a gross dude and I hope you burn in hell.

Meanwhile the real politics criminal here is Mitch Romney. I asked him how he was doing at the last debate and he started asking me if I'd ever seen Meet the Fokkers and what my favorite Paul Simon solo album was and I was like dude what are you even talking about shut up.

Then he started saying "epic fail" and laughing at himself. Which freaked me out, but then he immediately goes into his 600 point plan about how to get our troops out of whatever craphole they're in and I literally fell asleep standing up. When I woke up I was on a sofa and I felt sort of like somebody tried to convert me to Mormonism while I was asleep. 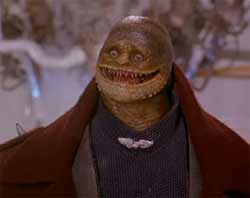 I will take Herman Cain over mitch romney any day.So basically what I am saying is I hereby accuse Mitch Romney of pushing my eyelids closed and then pulling the mormon version of some todd palin lactonic caper shit. I expect to sue for repstitution and, mitch romney, I swear if I ever find myself replacing any swear word with gosh I am going to fucking drive over you with my truck.

Well okay my truck I totaled accidentally driving it through a car wash with all the windows down and then somehow steering it into something called a gulch. I don't know it was in the citation which thank god I refused the blood test and took the breath test because I was just under the limit on alcohol but I had crushed up and eaten about fifteen of these pills that are supposed to treat alzheimers but make you like in limitless where you can imagine every possible scenario and remember everything except it's all in a cartoon version and all of the scenarios are this huge devil cat thing that eats you and you have to get out of its digestion system which is a corn maze.